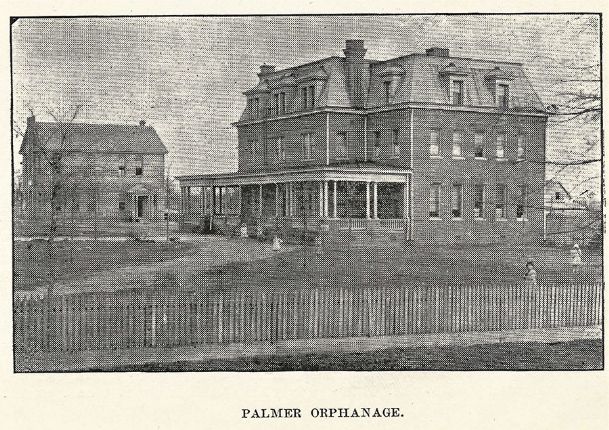 Palmer Home as it appeared in 1903. The brick building designed by noted architect Andrew Bryan was constructed in 1898 at a cost of $5,000. Photo by: Courtesy photo

Palmer Home as it appeared in 1905.
Photo by: Courtesy photo

Newspaper accounts from the summer of 1898 tell of the successful efforts of Rev. W.S. Jacobs and the Presbyterian Church in Columbus to raise the funds necessary to establish an orphanage.

By August 1898, 20 acres had been acquired, a noted architect, Andrew Bryan of Atlanta and New Orleans, had prepared plans and construction was starting. Palmer Orphanage was named in honor of Rev. Dr. Palmer of New Orleans who was the author of Thornwell's Life and Letters. Rev. Jacobs' father was director of Thornwell Orphanage in Clinton, South Carolina.

Andrew Bryan also designed, in 1898, the Columbus Opera House which later became the Varsity Theater. He was most noted for the many courthouses across the South he designed, including seven in South Mississippi and the Monroe County, Alabama, courthouse made famous in "To Kill a Mocking Bird."

On Nov. 17, 1898, the New Orleans Times Picayune reported: "The Palmer Orphanage at Columbus will soon open its doors. A large and handsome building is nearly completed."

The building cost $5,000, and on Nov. 24, 1898, a "special Thanksgiving service" was held at the Presbyterian church at the completion of the "magnificent building." About 1901 a second building was erected at a cost of $3,300. The original building became the girls' dormitory and the new building the boys' dormitory.

The opening of Palmer Orphanage was planned for Jan. 1, 1899 but was delayed. In the spring of that year, Rev. B.F. Bedinger, superintendent of Palmer, traveled extensively across the region, especially in Louisiana and Missouri, fundraising. With the help of Rev. Dr. Palmer, he met with good success in New Orleans. The formal opening of Palmer Orphanage occurred on the afternoon of May, 3, 1899.

An interesting article on Palmer Orphanage appeared in the Aug. 12, 1899, Greenville Mississippi Times: "The Palmer orphanage, Columbus, has enrolled 20 children to date. The superintendent was recently asked why he did not let the public know some of the special needs of the orphanage, through the papers, and he responds with the following as a starter: A dinning table, a dozen chairs, a buggy, an organ, a dozen mugs, clothing for boys aged 4, 6, 7 and 10, and girls aged 7, 11,and 13 and all kinds of vegetables -- watermelons included. He acknowledges donations of a saddle, a meat chopper and a refrigerator. If the orphanage is not supplied, it will not be because of the unwillingness of superintendent Bedinger to let its wants be known."

People from all walks of life in Columbus and the surrounding area supported Palmer from its beginnings. Those who could not give money gave what they could. Among the gifts received in December 1899 were those from Missionary Society at II&C (MUW), two sofa pillows; Girls of II&C, three baskets of cake, basket and bag of apples; Louise, Willie and Tom Hopkins of Brooksville, apples. There was a special acknowledgment of one gift: "We received two quilts not long since made by two dear old ladies, Misses Sarah and Nancy Jamieson, of Cliftonville. They have both nearly reached the allotted bound of life. Yet these dear friends felt enough interest in our children to make and quilt these quilts with their own loving hands and the work is beautifully done."

By 1903 Rev. H.E. McClure was superintendent of Palmer and the monthly operating expense was $250 to care for 43 children. Times have sure changed and over the years the people of Columbus have invested an incalculable amount of love, money and support in Palmer Home.

Thanks to Carolyn Kaye for her help with research.