Ask Rufus: A Reflection of Sainte-Chapelle 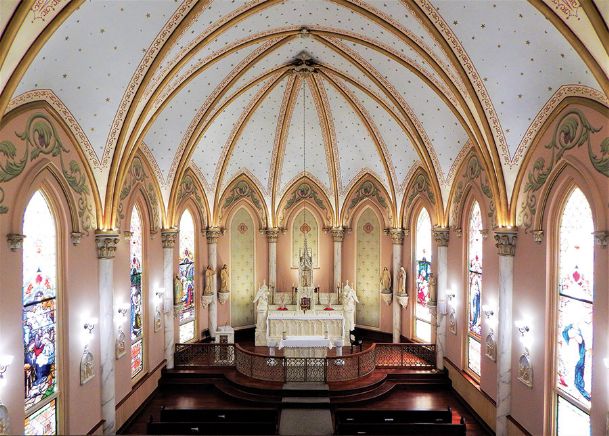 Annunciation Catholic Church in Columbus was constructed in 1863 as a scaled-down version of Paris' medieval Sainte-Chapelle which had been built in 1248 to house the Crown of Thorns and other holy relics that were saved last week from the fire at Notre Dame.
Photo by: Courtesy photo

Annunciation Catholic Church in Columbus is an example of a type of Gothic form rarely found in the South and is one of the most architecturally significant religious structures in Mississippi.

It was designed by French-born priest and architect Father Jean Baptist Mouton in a Gothic style based on Paris' 13th Century Church of Sainte-Chapelle, which was completed and consecrated on April 26, 1248. Father Mouton not only drew the plans for the church but designed and constructed the church's altar himself. Both the exterior and interior design of the church reflect scaled-down elements of Sainte-Chapelle.

Though the cornerstone was laid May 4, 1863, the church was not completed until 1869. According to Ken P'Pool: "The facade of the church is an eclectic assortment of French Gothic motifs. Its three-bay composition is a typically French ploy that dates to the earliest Gothic cathedrals."

The vaulted ceilings and interior plan of the church also closely duplicate the interior form of Sainte-Chapelle. Each of the interior columns and piers is painted to appear to be marble. Once inside, a worshiper is treated to the feel of a grand medieval church.

Annunciation's link to Sainte-Chapelle attracted my attention last week when the devastating fire swept through Notre Dame in Paris. King Louis IX (April 25, 1214 - August 25, 1270), who is now known as Saint Louis, purchased holy relics from Baldwin II of Constantinople in about 1238. Baldwin II had been experiencing significant financial problems and had used the relics to secure a debt of 13,134 gold pieces owed to Venetian bankers. The holy relics included what was and is believed to be the Crown of Thorns which Roman soldiers mockingly placed on Jesus' head before his crucifixion, a fragment of the True Cross, a nail from the Cross and other items with holy associations. The Crown of Thorns had been referred to as a holy relic as early as around 410.

St. Louis began the construction of Sainte-Chapelle in 1238 to be a holy chapel to house the relics. After the chapel's consecration, the relics remained at the chapel until the French Revolution of 1789. The then secular French government, wanting to downplay holy relics and items associated with royalty, removed the relics from the chapel to the Bibliotheque Nationale, the National Library of France. In 1806 they were restored to the Church and moved to Notre Dame. They remained there until last week's fire.

Before the fire, the Crown of Thorns had only temporarily left Notre Dame three times each as part of a sacred procession. The last time was on March 21, 2014, when in celebration of the 800th anniversary of the birth of Saint Louis, it was paraded in a return to its original French home of Sainte-Chapelle.

As the fire raged in Notre Dame last week, Father Jean-Marc Fournier, chaplain of the Paris Fire Department and a former military chaplain who had served in Afghanistan, led firemen into the burning building. They formed a human chain and, risking their lives, rescued and saved many of the holy relics, including the Crown of Thorns.

It was not long ago that Annunciation Catholic Church underwent a major restoration and was designated a Mississippi Landmark by the Mississippi Department of Archives and History. The church was carefully and lovingly restored with both its interior and exterior again reflecting the medieval beauty of Sainte-Chapelle and its Paris heritage.

As I write this on Good Friday thinking of the devastation of Notre Dame, Easter looms with good news that most of the holy relics were saved and that the once grand cathedral can be restored. It is a church that embodies the heritage of Christendom and the spiritual feel and beauty of the height of medieval architecture. Here in Columbus there is a taste of that medieval beauty.