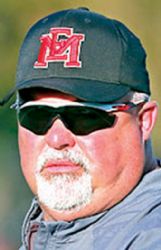 After becoming just the second NJCAA member school to claim back-to-back national football championships twice (2013-14 & 2017-18) with last year's 10-9 victory over Garden City (Kan.) in the 2018 NJCAA eTeamSponsor Football National Championship game played in Pittsburg, Kan., the EMCC Lions are seeking to join six-time NJCAA champions Butler (Kan.) and Northeastern Oklahoma A&M for the most all-time football team championships in the history of the National Junior College Athletic Association. Butler earned its six national football titles over a 28-year span (1981, '98-99, 2003 & '07-08), while NEO collected its half-dozen NJCAA gridiron crowns during the course of a 33-year period (1959, '67, '69, '80, '86 & '91). In addition, East Mississippi will bid to become the first NJCAA member school to capture three consecutive national football titles since the first championship game was designated in 1956.

On the heels of their fifth NJCAA football championship and fourth undefeated (12-0) season dating back to the 2011 campaign, 12th-year head coach Buddy Stephens' two-time reigning national champion and three-time defending state champion EMCC Lions will play the same nine-game, regular-season slate as a year ago but with the playing sites flipped from last season. For the first time since 2016, East Mississippi will open the season on the road by traveling to Raymond to take on MACJC South Division opponent Hinds Community College on Thursday, Aug. 29. This will mark the fourth straight year that EMCC and Hinds have met on the gridiron with the two teams having previously closed out the 2016 and 2017 seasons against one another. The Lions will also bring a 17-game overall winning streak into their 2019 season opener.

EMCC's month of September will consist of three home games, including opening and closing the month at home against MACJC South Division foes Pearl River (Sept. 5) and East Central (Sept. 26). The PRCC Wildcats and ECCC Warriors will be making their first trips to EMCC's Sullivan-Windham Field since the 2012 and 2013 seasons, respectively.

Winners of nine MACJC North Division regular-season football titles in the previous 11 seasons under Stephens' guidance, the Lions' 2019 division slate kicks off with a Sept. 12 home meeting with Itawamba. The following week (Sept. 19), EMCC will venture to Moorhead to battle the Trojans of Mississippi Delta.

East Mississippi's October football schedule also begins and ends with home contests. Sandwiched between an Oct. 3 home encounter with Northwest Mississippi and an Oct. 26 Homecoming matchup versus Northeast Mississippi to close out the regular season, the Lions will be on the road in division play against Holmes (Oct. 10) and Coahoma (Oct. 17) during back-to-back weeks. Kickoff for Homecoming 2019 versus the Northeast Tigers will be 2 p.m. on the Scooba campus.

With the top two teams from the MACJC's North and South Division regular-season standings advancing to the MACJC State semifinals on Saturday, Nov. 2, the 2019 MACJC State/NJCAA Region 23 championship game will be played the following Saturday (Nov. 9) at a site to be determined by the semifinal-round results. Having claimed the past three state football championships, the EMCC Lions also previously captured state titles in 2009, 2011, 2013 and 2014 under Stephens' leadership. The most recent MACJC program to capture four consecutive state football championships was Pearl River during a span (2003-06) when Stephens served as the Wildcats' offensive line coach prior to being hired as EMCC's head football coach in December 2007.

Showcasing an overall 11-year head coaching career record of 110-13 (.894), including a 62-4 (.939) division mark, EMCC's Stephens will begin the 2019 campaign tied for sixth place among the NJCAA's winningest active head football coaches. The three-time NJCAA Football Coach of the Year also ranks as the NJCAA's all-time leader in career winning percentage for head football coaches with at least 100 career games coached. Additionally, dating back to EMCC's first of five national championship seasons (2011, '13-14 & '17-18), Stephens' Lions have put together an impressive eight-year composite record of 86-5 (.945) since 2011.

3. Voice of the people: Angela Jones LETTERS TO THE EDITOR ([email protected])