Partial to Home: Avoid heartbreak; get your snoots early 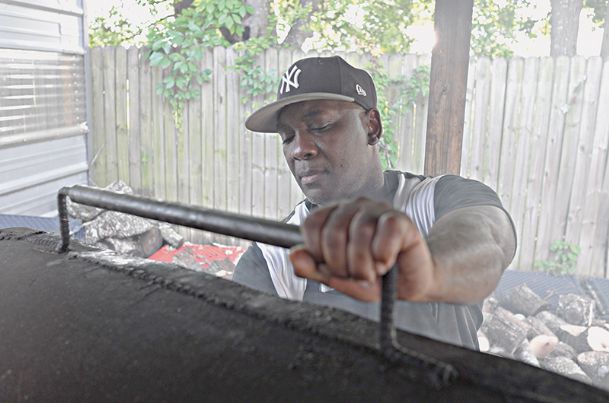 Friday afternoon Ronnie Clayton of Brothers Keepers Barbecue tends one of two grills he uses to cook the ribs, rib tips, chicken, Boston butts and snouts he serves at his barbecue stand at the corner of Seventh Avenue North and 20th Street. Photo by: Birney Imes/Dispatch Staff

Thursday morning amid a swirl of hickory smoke Ronnie Clayton raised the lid of a well-seasoned cooker and placed about a dozen hog snoots on the grill. Three hours earlier, around 8 a.m., he fanned the fire to life, and now the temperature inside the cooker was somewhere between 280 and 300 degrees.

The snoots will -- "In the South, African Americans call them 'snoot,'" Clayton says, "but it's 'snout.'" -- cook for 1Â½ to 2 hours. After that he will replace them with chicken, rib tips and ribs. The Boston butts for the pulled-pork plates and sandwiches were cooked the day before.

Later that afternoon Brothers Keepers Barbecue will open for business, and over the next few hours and throughout the following two days, Clayton will sell about 600 pounds of barbecued meat.

Mid-afternoon is not soon enough for the several truckloads of tradesmen who stop by midday Thursday (On Fridays and Saturdays Brothers Keepers is open from 11 a.m. to about 7 p.m.). One of these happens to be a pickup pulling a trailer with a zero-turn lawnmower.

After delivering the bad news, Clayton asks for a price to cut a shaggy vacant lot next door. A deal is struck and the men in the truck agree to return later that day and cut the grass, perhaps at a time when they can collect their fee in smoked meat.

Brothers Keepers occupies a large portable building positioned at an angle facing the corner of Seventh Avenue North and 20th Street. A metal overhang behind the building shelters the cookers. Adjacent to the portable building is a three-sided shed with two picnic tables and overhead fans for dine-in customers.

For 22 years Clayton has been building manager for St. Paul's Episcopal Church. Before that he worked in the kitchens at Shoney's and the Hilton Inn. He opened Brothers Keepers on Juneteenth 2011.

Over the years, as word has spread, the business has grown, fueled in part by Clayton's generous helpings and easy-going demeanor.

"My philosophy is you give people a mighty helping, and one day they might help you."

He caters class reunions and serves a wide range of out-of-town visitors. Local clientele range from walk-up traffic from the neighborhood to well-heeled professionals in high-end SUVs to linemen maneuvering Columbus Light and Water boom trucks.

When asked about his success, Clayton answers without hesitation: "You have to love what you're doing, give good customer service and get the texture of the meat right."

Though he grew up nearby on the north end of 20th Street, Clayton, 53, spent summers at his grandparent's in Bigbee Valley. He credits his grandmother for his love of cooking. "She used to cook all our meals in a wood stove," he said.

Cooking runs in the family. Clayton's brother is an in-house chef at CNN in Atlanta. Another brother was a cook in the Air Force. Clayton takes care of his older brother, Melvin, who has cerebral palsy and lives with him and his wife, thus the name Brothers Keepers.

His wife, Mona and 15-year-old son Harrison help with the business. Harrison has said he wants to carry on the after his father retires.

Friday about midday, Kris Richmond of Columbus Rubber and Gasket stopped by Brothers Keepers for an order of snouts. Richmond said he first learned of the hard-to-find delicacy from a FedEx driver.

"Turns out me and my wife both love 'em," Richmond said.

"Snoot or snout?" I asked, seeking clarity on this linguistic ambiguity.

"Depends on where you're from," Richmond said. "If you're a Yankee, it's a snout. Down here it's snoot."

"So that's your go-to item at Brother's Keeper?" I asked. An obvious question.

"He's the only guy in town who sells 'em," Richmond said. "It's heartbreaking when you get here and he's sold out."