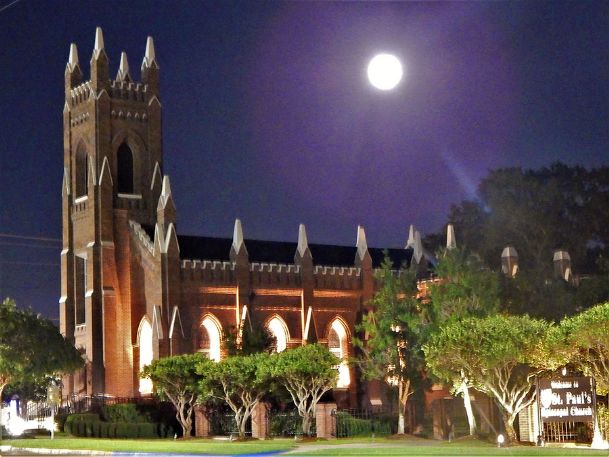 The Green Corn Moon rising over St. Paul's Episcopal Church in Columbus. Each month's full moon has a name usually based on traditional Indian names for that moon. Photo by: Courtesy photo

Last week there was a spectacular full moon. It was known as the Green Corn Moon.

While a few names, such as Harvest Moon, are familiar to people, the names of all the full moons are not so well known. Each year is divided into four, 3-month seasons of winter, spring, summer and fall, with each month having a full moon. Traditionally the full moon of each month has been named, with its ancient Indian name often surviving. National Geographic gives those names including: January- Wolf Moon, February- Snow or Hunger Moon, March- Worm or Sap Moon, April- Pink or Egg Moon, May- Flower or Milk Moon, June- Strawberry or Rose Moon, July- Buck or Thunder Moon, August- Sturgeon or Green Corn Moon, September- Harvest or Barley Moon, October - Hunter's or Travel Moon, November- Beaver or Frost Moon and December which is Cold or Oak Moon. Then there is the Blue Moon, but where does it fit in?

About every 2 1/2 years, one of the 3-month seasons will have four full moons rather than just three. In 1937 the Maine Farmers' Almanac termed that uncommon occurrence as a "Blue Moon." The seasonal moons were termed early, mid and late but that terminology did not work with four moons in a season. So that the last seasonal full moon would continue to be called the "Late Moon" the third full moon in a season with four full moons was called a "Blue Moon."

Then in 1946 Sky and Telescope Magazine published an article titled "Once in a Blue Moon." The article confused the definition given in 1937 slightly changing it. The new definition provided that a blue moon occurred when there were two full moons within one month. That change in definition took root after being used on a StarDate program on National Public Radio and further caused confusion as to when a blue moon occurs.

That confusion about the correct definition only increased when an article with the 1946 definition appeared in the New York Times and a children's edition of the World Almanac. The final nail in the coffin of the original definition occurred when in the popular board game "Trivial Pursuit" a blue moon was defined as being the second full moon within one month.

Today both definitions are often used, making blue moons not so rare as they once were, and definitely not as rare as hen's teeth. Be it four full moons in one 3-month season or two full moons within one month, "once in a blue moon" is one of those delightful phrases that gives color and life to our language.

As to the Green Corn Moon which was last week, it was a time for a major celebration and a dance among the Indian nations. In both the Choctaw and Chickasaw Nations of Mississippi dances played an important role in celebrations. H.B. Cushman, who was born at the Mayhew Choctaw Mission, wrote in 1899 that the Chickasaws and Choctaws engaged in basically the same "time honored" ancient dances which included the war dance, the scalp dance, the ball play dance, the green corn dance and the buffalo dance. There were also social or "fun-making" dances such as the chicken dance, the horse dance and the "tick dance."

The Green Corn celebration had its roots in ancient times. It was a celebration of thanksgiving for a successful corn crop. Among the southeastern Indian nations it was the most important of all the seasonal ceremonies. It was not a specific full moon but the first full moon after the late corn had filled out and ripened. In the late 1600s and early 1700s, the Natchez Indians celebrated it as the "Great Corn" Moon but celebrated it in the seventh month of their lunar calendar which would correspond to September. They called it the Maize or Great Corn Moon and called the August Moon the Mulberry Moon.

The Green Corn Ceremony among the Choctaw and Chickasaw became much more than just a ceremony of thanksgiving. The ceremony would last from three to five days and include a combination of feasting and fasting. It was a time of thanksgiving, spiritual renewal, purification, rekindling of relationships, settling crimes that had been committed, healing and among some Choctaw towns the enacting of laws. There would be ceremonial dancing, the music provided by the beat of a drum.

Peter Pitchlynn emigrated to Oklahoma with his family during the Choctaw Removal of the mid-1830s. In the mid-1860s he served as governor of the Choctaw Nation in Oklahoma. In 1846 he returned to Mississippi and visited his childhood home at Plymouth Bluff. While traveling through Mississippi he attended a dance held by Choctaws who had remained in the homeland. Though not the "Green Corn" dance, it was at the November full moon and his description in a letter to Gideon Lincecum conveys the imagery of such a dance.

"...Here was a dance upon the green Earth, the pure air of the pine woods to be inhaled, and the full orbed moon and twinkling stars shedding their light beams on us and with those lights, we had the lightwood fire flaring up red blazing near which formed the moving circle of young men and women who danced to their own songs, in which all united their voices, and ever and anon made the war shout of the warriors which rang loud and long upon the air, and on they moved with varied song and change of dance till at the late hour in the night when they closed with a grand flourish in the Man Dance ... There was a wild enchantment about all this, yet the most natural and simple."

Charles Hudson of the University of Georgia, in his classic book, "The Southeastern Indians," succinctly described the Green Corn ceremony as being, "if we combined Thanksgiving, New Year's festivities, Yom Kippur, Lent, and Mardi Gras." It was the great yearly celebration and assembly of towns and families of the Choctaw and Chickasaw homeland. While we enjoy the beauty of the full moon we often forget the important role of the full moon in times past.

Rufus Ward is a local historian.

1. Possumhaw: A stranger in the reeds LOCAL COLUMNS

2. Wyatt Emmerich: Roasted for a good cause LOCAL COLUMNS

3. Other Editors: MDOT isn't the problem and the lottery isn't the solution NATIONAL COLUMNS