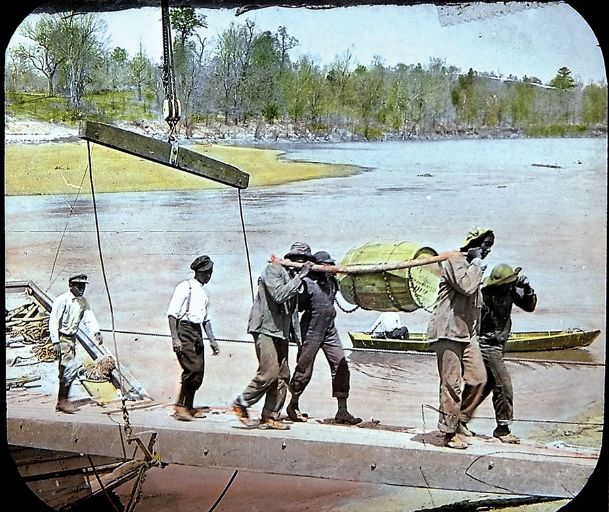 Richard Amerson, a Livingston, Alabama blues singer recalled work chants from his days as a roustabout on an Alabama steamboat loading and unloading goods. In this 1910-1915 photo, roustabouts are unloading barrels of molasses from a Tombigbee River steamboat. Photo by: Courtesy photo 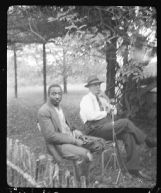 John Lomax recording Richard Amerson, a Livingston, Alabama blues singer in 1940. Amerson, a former Alabama River roustabout, was "a musician of many parts," "played the harmonica," sang "with a husky voice" and "looked like an abandoned and hopeless vagrant."
Photo by: Courtesy photo/Library of Congress, Prints and Photographs Division, Lomax Collection

When blues is mentioned most people think of the Delta, Memphis, St. Louis or Chicago blues, but blues music has deep roots in the Black Prairie.

The Black Prairie, or Black Belt (named after its fertile rich black soil), stretches in a crescent shape from northeast Mississippi across south central Alabama. The Tombigbee River flows through its west side and the Alabama River through its east. The region has produced such blues legends as Howlin' Wolf, Big Joe Williams, Bukka White, Lucille Bogan and Willie King.

One of the more interesting bluesmen associated with the Black Prairie was Blind Ben Covington, who first recorded in 1929. Although there is some confusion over Covington's birthplace, Big Joe Williams knew him and played with him. Williams called him Bogus Ben Covington because he was not blind but found that by claiming to be blind, he got larger tips.

While references are scattered, they clearly show an early popularity of the blues and its heritage as a part of the Black Prairie. In the November 14, 1915, Columbus Commercial it was reported that "Joe Coburn and his big Minstrel Blues (would) make their annual parade down Main Street" in Columbus. Their blues was said to be newer and bluer than the "Memphis Blues." By 1917, blues records were advertised for sale in stores in Aberdeen, Columbus and Macon.

Of the earliest area blues performers, few names have survived. Two names I found in period records seem to have left but little trace.

In 1919 Lt. Eugene Hardy returned home to Lowndes County after serving as a pilot in the Army Air Service during World War I. His welcome home party was on Sarah Hardy's porch. Entertainment was provided by the "blues" of Jim Shine. Shine was noted for playing "Alabama Waters on his guitar in true Southern style."

Some bluesmen traveled about singing for food and lodging at area farms. One such musician was Big Joe Gray, who traveled through the prairie around 1930 performing in the Artesia area. In Columbus, the blues flourished at the Queen City Hotel, which opened in 1909 in the bustling African-American neighborhood of Seventh Avenue North.

The writings and photographs of John, Alan and Ruby Lomax for the Archive of the American Folk Song document much cultural history that otherwise would have been lost. Between 1934 and 1950 they traveled across the South interviewing, photographing and recording folk musicians including blusemen.

In 1940 they traveled to Livingston, Alabama in the middle of the Black Prairie. Through their efforts there much of the story of blues in the Back Prairie has been preserved.

I found especially interesting John Lomax's account of Richard Amerson, a singer of the blues who was "a musician of many parts," "played the harmonica," sang "with a husky voice" and "looked like an abandoned and hopeless vagrant."

Lomax's interview with Amerson also delved into something I had written about last year. Some of the blues songs that evolved out of work chants were not only from farm labor but were also based on the work chants of riverboat crews.

Amerson had once been a roustabout on a steamboat on the Alabama River. He also claimed to have been a well-digger, a minstrel, a farmer and a voodoo doctor. He mostly spoke about his days as a roustabout. He began by chanting a work song that the men sang as they loaded and unloaded a steamboat.

As a roustabout, Amerson helped load and unload sacks of fertilizer, 500-pound bales of cotton and large barrels of molasses. He was a crewman on Mr. Perkins' boat which ran on the Alabama River between Mobile and Selma. He recalled "When we unloaded fert'lizer we had to go down in de hull an' walk up a tall step. Ev'ry time we come up from de top an' th'owed it down, de fellow'd tell yo' an' commence callin':"

Whoa back buddy, whoa back!

I gota coat here to fit yo' back!'

On and on until the boat was unloaded."

John Lomax also told of Vera Hall and Doc Reed from the Livingston area. They mostly sang old spirituals rather than the "worl'ly songs" sung by Richard Amerson and Blind Jesse Harris. Lomax did get her to sing Boll Weevil Blues and Another Man Done Gone which began:

I didn't know his name

He had a long chain on

He killed another man

I don't know where he's gone."

The Livingston interviews were published by John Lomax in his 1947 book "Adventures of A Ballad Hunter" and provide a window into the African-American music heritage of the Black Prairie.

For those who appreciate great music and an enjoyable evening I hope to see you at The Black Prairie Blues Festival Friday night, Aug. 30 in West Point. It is at the Mary Homes College Gym. Doors open at 5:30 p.m. and it starts at 6. Tickets ($20 in advance, $25 at the door) are available at the door or at Columbus Arts Council, Jack Forbus Insurance in Starkville or the Growth Alliance in West Point. I am looking forward to a most enjoyable evening of some fine music.

3. Slimantics: A matter of Black and Blue and which really matters LOCAL COLUMNS

4. Voice of the people: Angela Jones LETTERS TO THE EDITOR ([email protected])