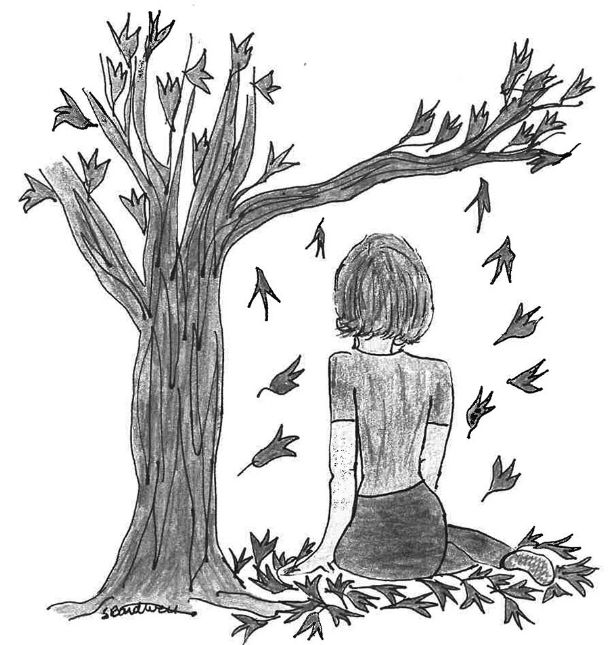 "At a certain point, when I let go and was done -- when I stopped and could say I was blessed ... that's when I was healed. Letting go healed me."

Leaves are starting to flutter across the yard onto the porches. A massive number are falling from the ash tree down to the deck. Sweeping may last a day, and then the surface is covered again. I wondered exactly why do leaves fall? Do they know, as I do, the season of fall is only a week away?

There were a number of possible reasons why leaves fall. Some trees, as a matter of protection, push their leaves off in a process called abscission. Deciduous trees have thin leaves with water collecting in their veins. Should the water freeze in winter the tree would become damaged so it purposely rids itself of leaves. Other trees, knowing their broad leaves would become brittle and battered by strong winds, thus compromising the integrity of the trees, rid themselves of their leaves. Also, by the end of summer many leaves are damaged by insects, drought and disease and so in dropping or releasing the leaves the trees go dormant, protecting themselves until spring when the process starts all over again.

Gunilla Norris, in her book "Embracing the Seasons," wrote the following of fallen leaves:

Messy as the leaves are in the garden, their process is direct and clean. When the time comes to let go, they let go. I take up the rake and move the leaves toward the compost pile. They rustle as I rake -- a familiar autumn sound. Letting go is a constant process. Often, we cannot know what is happening until months later, sometimes years later. Memory shifts without our knowing about it. The very structure of experience changes. Insights emerge. Our own aging adds its part to this as does the living of every day. The old breaks down, and we sense something new emerging."

Gunilla reminded me of a mentor I once had. She taught me about seasons, that few things last forever, and if I thought of life in seasons it would somehow make life easier for me. I could move more comfortably through a season than I could a loss -- be it a job, a friend, a relationship, a pet, a family member, a move, my own health.

Ralph Waldo Emerson said, "Finish every day and be done with it. You have done what you could. Some blunders and absurdities no doubt crept in. Forget them as soon as you can, tomorrow is a new day, begin it well and serenely, with too high a spirit to be cumbered with your old nonsense."

On a scrap of paper, I found a writing in my impossibly illegible handwriting from an unknown source: Wake with a smile -- the act of smiling makes you happy. Savor your rituals -- coffee, devotionals. Off with the news and on with happy tunes. Forgive yourself for being human -- life is an important classroom. Sweat -- do something physical. Eat something healthy to brighten your mood. Dress to impress yourself -- something you love, feels comfy, and makes you feel confident. Set out to improve someone else's day. Maya Angelou said "Be present in all things, be thankful for all things."

3. Voice of the people: Angela Jones LETTERS TO THE EDITOR ([email protected])