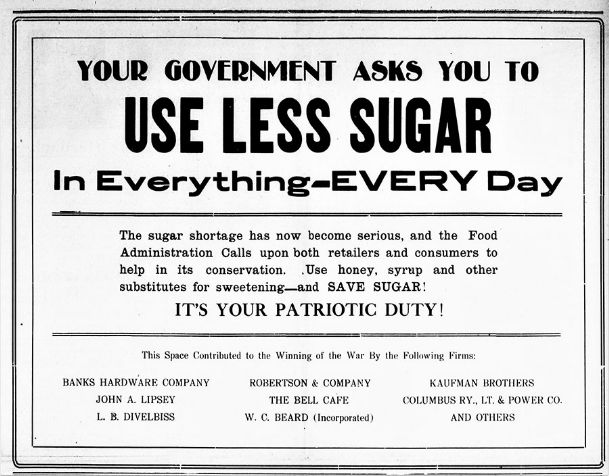 This public service ad appeared in the Columbus Commercial on Aug. 4, 1918, in response to the Sugar Famine of 1918-19. On Oct 12, 1919, the Columbus Dispatch reported Columbus stores would run out of sugar within a few days. Photo by: Courtesy image

Few people have heard of the sugar famine of 1919 and its impact on Columbus, but 100 years ago a headline in the Columbus Dispatch read, "Sugar Famine Strikes Columbus." Refined sugar comes from both sugar cane and beets. The war in Europe, beginning in 1914, totally disrupted beet sugar production in Europe. The result was a shortage of refined sugar in Europe, which later spread to the U.S.

When the United States entered the War in April 1917, sugar prices in America were already climbing and those increases only continued with the military's demand for sugar. The needs of the wartime economy led to the creation of U.S. Food Administration on Aug. 10, 1917, and the creation of its Sugar Department. Within the department was a Sugar Distribution Committee that's job was "to allot available sugar as fairly as possible to the dealers in the various localities." It was also its job to ensure that an acute shortage of sugar in some regions, such as the northeast, be avoided.

As the shortage increased its effects became more pronounced. A Jan. 1, 1918, article in the Montgomery, Alabama, Advertiser reported both the Coca Cola and Chero Cola bottling plants were on the verge of having to cease operations and close. The Chero Cola plant had already seen its allocation of sugar cut in half in 1917, was out of sugar and was having trouble obtaining more. The Coca Cola plant was down to one barrel and would only be able to bottle "soda water" for half a day more.

The shortage was covered in the two Columbus newspapers, the Commercial and the Dispatch (these two papers would soon merge). The Dec. 30, 1917, Columbus Commercial placed blame on the federal Food Administration saying its director's policies created the sugar famine and "American food products shipped to Europe can be bought cheaper in France and England than in this country."

A headline in the Aug. 4, 1918, Columbus Commercial said, "Paucity Of Pies A New War Horror." The article continued describing how the "Sugar Famine" might cause local restaurants to stop serving pie. It was reported the sugar supply "has been restricted to a point where proprietors of public eating places can secure barely enough of the saccharic substance to sweeten the tea and coffee served to patrons."

There were even reports of possible laws that would limit the amount of sugar used in tea and coffee to one teaspoon per cup or glass. That ordinance had been enacted in several cities, and it was feared that if enacted in Columbus it would stop the traditional local practice of two teaspoons of sugar in each cup or glass.

On Jan. 23, 1919, it was reported that there was less than 500 pounds of sugar for sale in the entire city of Asheville, North Carolina. The city was said to be facing "sweetless times." On Jan. 26, 1919, the New Orleans Item reported that "Asheville, together with all territory south of Virginia, was placed in the New Orleans sugar zone. However, because of complaints alleging the cane sugar was lumpy, dark and generally unsatisfactory, the local merchants have refused to handle it."

A headline in the Oct. 12, 1919 Columbus Dispatch read, "Sugar Famine Strikes Columbus." According to the article:

"Columbus along with the rest of the country faces a sugar famine. The condition locally is serious and the limited supply now in hand of the retailers will last only a few days. Several retailers have completely sold out their stock and others are conserving their stock for their regular customers, limiting the sales to 2 pounds."

Apparently, the great sugar famine even inspired a Blues song. In 1919, Clarence Williams and Lucy Fletcher wrote the "Sugar Blues." Though not recorded until 1922, the beginning of the song sure seems to address the sugar famine then going on.

"I got those sugar blues,

The whole town is ringing;"

With the end of the war sugar stocks soon returned to normal, but the famine itself resulted in several observations. A lot of blame was put on federal agencies for mishandling the sugar shortage by favoring refineries and processors over the growers. Problems were also caused by dividing the country into sugar zones. An unexpected reason given for the shortage was the huge quantity of sugar used in the manufacture of "soft drinks" as a result of the enactment of prohibition.

One problem that arose read like a current headline. In the west and especially California, Mexican workers were brought in as laborers on the large beet farms with so much of the prior labor force serving in the military. As the war was ending, a debate raged as to whether the farm workers from Mexico were taking jobs needed by returning servicemen at the war's end. There were even calls in some newspapers to close the border.

It all brings to mind the value of knowing history. Several people including Sir Winston Churchill are credited with in various way saying; "Those who do not know history are bound to repeat it."