Slimantics: Reeves is running against himself Â­-- and losing 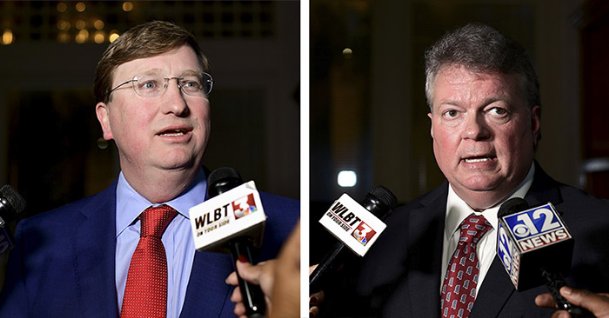 A comedian once explained why grandparents are so much nicer than parents:

"It's because they're old and they want to go to heaven."

As Lieutenant Governor for the past eight years, Reeves built a record of cutting funding for state education, everything from K-12 to community colleges to universities.

So every time the debate turned to education, Democrat Jim Hood looked like the cat that ate the canary while Reeves looked like a Big Tobacco lawyer at a congressional hearing.

So Reeves has shifted tactic. Tuesday night, he was all for raising teacher pay, an issue he largely ignored when, as leader of the state senate, he had the power to implement raises. Now, as governor -- a position that has no legislative authority -- Reeves plans to raise teacher pay to the Southeastern average in just four years.

It's the same for community college funding, which has been cut by 18 percent, according to Hood. Now, Reeves plans to pump $100 million into community college workforce training. Hood, detecting blood in the water, noted that cuts in university funding meant parents and students were on the hook for more and more of the cost -- Hood said tuition at nearby MUW had increased by 40 percent during the time Reeves led the Senate.

Typically, by the end of a debate, there is mixed verdict, and in a state that leans heavily toward Republicans, the benefit of the doubt goes to the man with the R.

Yet, on a WCBI Twitter page poll that began as soon as the debate ended, viewers gave the edge to Hood by a 2-to-1 margin, and when Reeves briefly met with reporters, he opened with a statement intended as a joke that might have been closer to the truth than he imagined.

Let's be honest here. Asking Reeves for his thoughts on improving public education is like asking the fox how he would improve hen house security.

The record is clear.

And as bad as it was, it could have been worse. Remember, teacher pay has only emerged as an issue recently. For much of the past eight years, the debate has been about how the state funds K-12 education, which is to say miserably. Since the Legislature adopted its funding formula (MAEP), the Legislature has fully-funded education only twice. When pressed, the Republican-dominated Legislature said the formula was inaccurate and unrealistic. Three years ago, the Legislature hired a consultant to recommend a new better (i.e. cheaper) funding formula. When that consultant recommended a formula that was still too expensive for the Legislature's taste, it dropped the matter altogether and hasn't said boo about it since.

As the 2019 election year approached, the Legislature shifted tactics, focusing on teacher pay and passing a $1,500 pay raise in the 2019 and promising more in the future, mainly to curry favor with teachers. It's a lot easier to pay teachers than fund education, after all. The Legislature is like a sailor arriving in port: always looking for easy and cheap.

Yet if you ask the average Mississippi teacher about the issues they face, teacher pay will emerge as just one of the problems, and maybe not even the biggest.

Changing the narrative has proven effective. When Self raised the issue of education funding, the question was framed around pay raises for teachers.

If the debate had shifted to that larger issue, which has been all but ignored, Reeves might have spontaneously combusted, so hot would his seat have been.

As it was, Reeves contradicted his own record of education funding and moved on as quickly as possible.

Reeves is a dollar store toy candidate: Pull a string, and you'll get one of a handful of predictable empty test-marketed responses, most of them ending with either "liberal" and "Hillary" or "conservative" and "Donald Trump," depending on the question.

All of this is going to make for a very interesting story when voters go to the polls on Nov. 5.

Hood, the only Democrat to hold state-wide elected office, has a legitimate shot at becoming the first Democratic governor in 20 years.

Even the most committed Republican has nothing to lose, though.

Remember, the Republicans have a veto-proof majority in the Legislature and will not be shy in using it against a Democrat Governor.

When you think about it, the Republicans are in a great spot: They can have their way without the having the unpleasant necessity of having Tate Reeves around.

That's no small consolation, either. There are a lot of Republican legislators who are just fine with that scenario.

1. Voice of the people: David and Cherry Dunn LETTERS TO THE EDITOR ([email protected])

2. Voice of the people: Kim Thomas LETTERS TO THE EDITOR ([email protected])

3. Our view: Wearing masks is the least we can do DISPATCH EDITORIALS