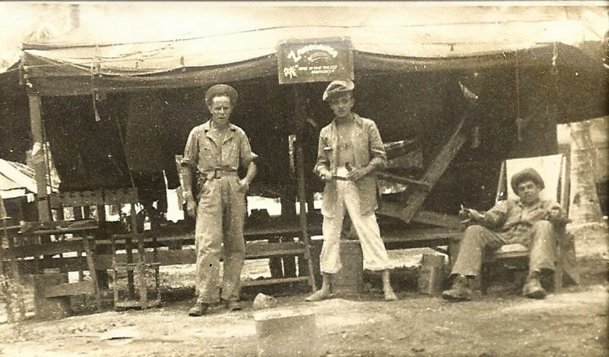 The camp of the Seabees of the 113th Naval Construction Battalion, at Zamboanga in the Philippians in May of 1945. The camp's name on the tent says "The Home of the Tail-less Monkeys." Bob Burns is on the right sitting in a chair. Photo by: Courtesy photo/Burns family

Bob Burns: "Hell, I was on the bulldozer, watching him (Gen. MacArthur) come in. We had to clear the beach so he could come ashore."
Photo by: Courtesy photo/National Museum of American History

Over the almost 10 years I have been writing this column I've told stories of many local veterans. Most of those stories, such as my father's, Brad Freeman's and Col. Alva Temple's, took place in the European Theater of World War II.

There are many fascinating accounts from the war in the Pacific that also need telling. I planned on writing about two of those today but have decided that each story deserves a full column. This week will be the story of R.G. "Bob" Burns and next week, Charles Wilburn.

Bob Burns was 18 when he joined the Navy in 1943. He had grown up in Lowndes County and had been working with his brothers cutting timber. With that background he became a Seabee, as members of the Naval Construction Battalion are known. As a member of the 113th Naval Construction Battalion, he received training at several bases, including the Seabee base at Gulfport. On Feb. 22, 1944, he shipped out from California aboard the USS West Point for Finschhafen, New Guinea, where he arrived on March 16.

The first assignment of the 113th was the construction of Naval Base 3115 at Hollandia, New Guinea. The port of Hollandia on the north coast of New Guinea was an important Japanese installation that included three airfields. On April 22, 1944, the U.S. 24th Infantry Division landed and assaulted the Japanese defenses. By April 24, the airfields had been captured. On May 9, the 113th landed and immediately began construction work to make the bombed and battered Japanese bases operational as American bases.

The Seebees discovered that though they were a construction battalion, moving in behind the advancing Marines or Army would often bring them into combat zones. Burns recalled such as incident at Hollandia. During the base construction on the island, Burns was a bulldozer operator. As work was progressing, a Japanese sniper shot the operator on the bulldozer next to his. Burns grabbed his rifle, which rode on the dozer with him. Surveying the nearby tree line, he saw movement, spotted the sniper and shot and killed him.

Burns had an interesting encounter one night at the Seabee base at Hollandia when he was on guard duty on the road leading to the base headquarters. He was under orders not to let anyone through unless they had the correct password. Carolyn Burns Kaye said her father had told her "late that night, a jeep came flying up to the gate and the driver demanded to be let through even though he did not know the password. Burns refused. The driver asked him, 'Do you know who is in the jeep?' Burns replied, 'I don't give a damn ... even if you were carrying MacArthur, you couldn't pass!'" Being dark Burns could not see that it actually was MacArthur in the jeep. "He radioed Headquarters and only when the officer in charge came down was the gate opened for the jeep to pass. Burns said he got a dressing down in front of General MacArthur but after they had passed through, the officer praised him for standing fast to the orders he had been given."

Carolyn also recalled another MacArthur story. When MacArthur returned to the Philippines at Leyte on Oct. 22, 1944, he made the first of his two famous landings. However, on the first landing the landing craft he was on drew too much water to get close to the beach. The beachmaster who was snowed under sorting out the confusion of the ongoing troop and equipment landings at the beach was radioed to send a smaller craft out to bring the general in closer so he wouldn't get too wet. He (and he was in total command of all beach activities) responded: "Walk in -- the water's fine."

MacArthur, highly perturbed, waded in through thigh deep water. However, when he saw the photo where the anger on his face appeared to be firm resolution and as he appeared to be coming ashore with his troops, he reconsidered. He realized it was a great PR photo and liked it. At his next landing on the main island Luzon, American officers still recalled MacArthur's anger at getting wet on his previous landing.

To insure that the general would not again be angered, Seabees were ordered to prepare the beach and build a small pier for the general to land. MacArthur, remembering the good press he got out of the previous photo, ordered the landing craft to steer away from the pier and let him land in ankle deep water in front of the assembled news photographers.

Carolyn asked her father if he knew anything about the story behind the photos of MacArthur in the Philippians. He responded, "Hell, I was on the bulldozer, watching him come in. We had to clear the beach so he could come ashore." He also commented "MacArthur repeated the landing several times for the benefit of the photographers."

Tomorrow is Veterans Day. We owe our freedom to all of our veterans and to those still serving. Keeping that in mind veterans and servicemen should not be remembered just on Veterans Day. They should be thanked and in our prayers every single day.