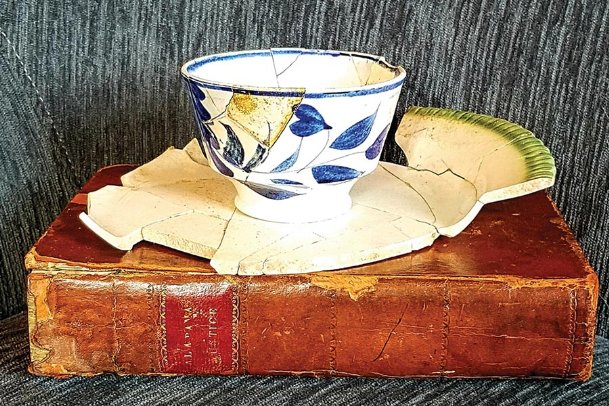 Artifacts of Columbus' beginnings. A broken plate and tea cup from the early 1820s found at one of Columbus' oldest house sites are resting on one of Alabama's first law books "The Alabama Justice of the Peace," printed at Cahawba, when it was the Capital of Alabama. The book belonged to William Moore, the first mayor of Columbus. Photo by: Courtesy photo

This coming Friday, December 6, 2019, will mark the bicentennial of Columbus' official recognition as the Town of Columbus.

That date has been mostly ignored and 1821 considered Columbus' founding because when settled, Columbus was believed to be in Alabama, and it was an Alabama legislative act which first recognized the Town of Columbus.

The rapid growth of Columbus, which had begun during the summer of 1819 as a result of the construction of the Military Road from Nashville to New Orleans, is evident in post office records. On Feb. 29, 1820, the congressional committee on post offices and post roads was directed to look at establishing a post route in Alabama "... from Tuskaloosa to Columbus, in Marion County, by the court-house ..." Then on March 6, 1820, the Columbus post office was established. Regular mail service would not begin until December and would only run once every two weeks.

Governor Poindexter of Mississippi announced on January 3, 1821: "It appears that a considerable population on the waters of the Tombigbee formerly attached to Alabama fall within the limits of this state."

The granting of a charter to Columbus by the Mississippi Legislature occurred 14 months after Alabama recognized Columbus as a town and 11 months after the Columbus post office was established.

It was Oscar Keeler in his 1848 history of Columbus who first told the story of Spirus Roach who "occupied and kept entertainment in the house built by Thomas Thomas" (in 1817). Because of the "peculiarities of himself (Roach had a long-pointed nose) and family, the Indians named the place Shook-huttah-Tom-a-hah, or Opossum Town."

In an 1872 Columbus Index article titled "Columbus in 1822 by its Oldest Inhabitant," Rev George Shaeffer takes his readers on a visual stroll down Main Street just three years after the town's founding:

"As may be supposed, Columbus was a small place when my eyes first beheld it in 1822. It contained about 150 inhabitants. Main Street presented quite a different appearance from at present; only a few scattering houses: On the south side at the west end, there was a large house, composed of four rooms in each story, with a cross passage through the center in each direction; this stood on the point of the hill. It was occupied by the venerable Judge Cocke, who called it 'a big pile of logs' (now the location of the Tennessee Williams home). The next house going east was a one storied store about 20-by-30 (feet), frame, kept by Judge Haden; it stood opposite the post office (about where the law office of Crowell, Gillis and Cooper is now located). The next was a two-story frame store on the corner opposite the hotel, occupied by John B. Raser (now the site of the old Masonic building).

"Between that and the corner of Main and Market streets, there was quite a hollow (The low place where the Trotter Convention center is located extended as a "hollow" across Main Street into the middle of the block south of Main Street). The first house from Raser's was a log blacksmith shop in the hollow about halfway down the square (about where The Paint Store is located). The next house was a small tailor shop (now the location of Three Sisters Pie Co). The next was a one story, about 50 feet long, occupied by Capt. C. Adams as a store; this stood about where Knapp's shop stands (now the location of Impressions By Susan/the old Globe Building). The next house was an old carpenter's shop on the Gross corner (now the Fashion Barn location). There was a carpenter's shop on the corner occupied by Humphries and Hudson (now the location of Ruth's Building and Cafe on Main). From thence east and south was covered with pines and small bushes.

"On the north side of Main Street, west end, was a one story store kept by Capt. Kewen (now where the small brick building is next to the Elks Club). The next building was a small retail whiskey shop (now the Elks Club). The next was Barry's Tavern, a two-story house of pretty large dimension, a frame, but unfinished, it stood on the corner where the Gilmer Hotel is kept. On the opposite corner, where the Index office is kept, stood a small two story framed house occupied below as Dr. Barry's shop and above a Masonic lodge (the present site of the Varsity Building). From these, going east was no building until after crossing a deep hollow (behind Trotter Convention Center), you arrive at a long one-story house, occupied in part by Major William Dowsing as a tavern, and in the west end as a small retail store; this house was on Blair's Corner (the present location of the Bank of Commerce building on the northwest corner of Main and Market). Market Street was not built upon. The balance of the village was composed of a few log cabins scattered among the bushes. The Franklin Academy was a small frame house 30-by-40 (feet) not ceiled or plastered; this was the preaching place of all denominations; the Methodist was the only organized church at that time, composed of a very few members (current Franklin Academy building is at the original location)."

From other sources, there are references that identified the site of other early downtown Columbus residences and businesses. The Columbus Post Office was established in 1820 at the residence of Gideon Lincecum, the first postmaster. His house, which was built in 1819, was the first frame house in Columbus and was located on Military Street, now Second Avenue North behind the Elks Club building.

The site of Spirus Roach's house was about where the office of the Columbus Convention and Visitors Bureau is now located. The Ole Homestead (my house) at the corner of College and Third Street South is the oldest known surviving building in the original town limits and was built or purchased by Charles Abert in 1825. At that time there were no other structures between it and the river. The back part of the old Back Door Columbus or Old 82 building is probably the oldest surviving commercial building and is c.1830.

The open space next to Franklin Academy was originally called Franklin Square and was the assembly place for parades and public gatherings.

The earliest Columbus map I have found is an 1820s map of the Gilmer block. It shows the Eagle Hotel on the east side and the Kewen property on the west side. Interestingly, it shows a 20-foot alley running eastward through the middle of the block to the Eagle Hotel.

The earliest known full city map is from 1839 and shows the Eagle Hotel on the southeast corner of the block, but it has been joined by the Bell Tavern about where the present Elks Club building now stands. In 1839, the hotel advertised that the specialty of its table was oysters and that the Tuscaloosa and Pontotoc Stage Line office was located in the hotel.

The founding of Columbus is an interesting puzzle and working with Carolyn Kaye, Gary Lancaster and the late Sam Kaye we have long been trying to solve it.

The site of Columbus was first Indian territory, then in Tuscaloosa and then Marion counties in Alabama, then Monroe and finally Lowndes counties in Mississippi. And that's just from 1816 to 1821.