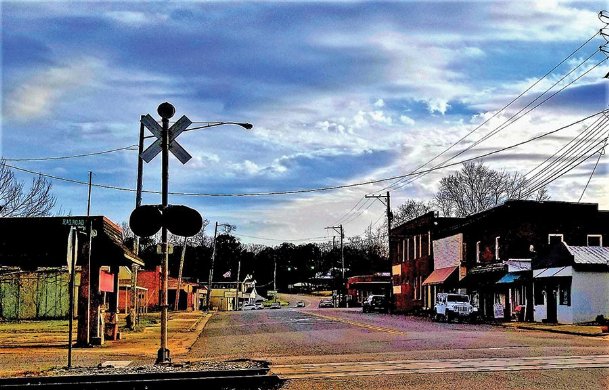 Millport, Alabama - which is said to have been founded in 1848 but as early as 1836 - advertisements appeared in Columbus and Tuscaloosa newspapers for the sale of lots in "Mill Port." Photo by: Courtesy photo

In the 1800s there was a water-powered cotton gin at Millport. To be sold, the cotton was taken by ox wagon, as in this 1910 postcard, from Millport to Columbus.
Photo by: Courtesy image

I have been asked about the history and story behind Millport, Alabama, which is located 24 miles up Highway 50 from Columbus. Millport is in Lamar County, which was created on Feb. 4, 1867, out of parts of Marion County and Fayette County. In digging around into the history of Millport, I found far more to the story of its founding than I expected.

Working on the story was also a good excuse for Karen and I, and Carolyn Kaye, to go antique shopping in Vernon and then explore Millport. It turns out Millport is apparently an older town than people thought. The highway itself between Millport and Columbus tells a story. Beginning in Columbus with Waterworks Road, Highway 50 East is the early 1820s "Upper Tuscaloosa Road" from Columbus. Waterworks zig-zags through town, cutting through blocks, because the road predates the city's street grid.

As a starting point for my research, I used Joe Acee's 1976 book, "Lamar County History" and Thomas Owen's classic book, "History of Alabama," published in 1921. Both accounts tell a similar story.

According to Owen, who based his account on manuscripts at the Alabama Department of Archives and History, Millport's "original settlement was made about 3 miles west of the present town in 1848."

The town was moved about 2 1/2 miles east in 1858 to "College Hill" and then moved a half-mile to its present location when the Georgia Pacific railroad was constructed nearby in 1882. As the name implies, Millport, being located just out of Luxapallila Creek's flood plain, was the site of several water-powered mills. Interestingly, the water mills were not just grist mills grinding corn into meal but also at least one water-powered cotton gin. The cotton was taken by ox wagon to Columbus to be sold. The roughly 24-mile trip was said to have taken three days.

Carolyn and I have dug into old newspapers and found a different story of Millport. It is a story told through advertisements in two 1836 newspapers, The Flag of the Union in Tuscaloosa and the Columbus Democrat in Columbus. The first ad we found appeared in the May 7, 1836, Flag of the Union:

The Town of Mill-Port for Sale

A Town will be laid off, and the Lots offered at public sale on Thursday, the 19th day of May next, on the following liberal terms, viz in two equal installments, of one and two years.

The proprietor would deem it unnecessary to enumerate the many advantages which this well known place commands, but for the information of those unacquainted, who might be inclined to come to this place of business, the following facts are stated:

Mill-Port is in Fayette County, Ala., 23 miles east of Columbus, Miss., and 25 miles west of Fayetteville, and 33 miles north of Pickensville. This desirable and promising place is more remote from any other trading place than can elsewhere be found; and its natural and local situation, gives promise of greater advantages than have generally been considered, being distant one mile on the South side of the Lookspelilah [sic] river, which is, with small improvements, navigable in the winter season, and the Legislature has proffered to furnish means for this purpose; and the communication by good roads is easy at all times, and in any direction; one of which makes immediate access to the Railroad now in progress from the Tennessee Valley to Mobile, and as at present contemplated, only distant 10 or 15 miles.

When the unquestionable health of this region of the country, and the fertility of its soil are considered, in connexion [sic] with the above advantages, and many more that might be suggested, the proprietor deems it useless to add but this one more grand inducement:

It will be precisely in the centre of the new county to be made by a division of the old counties according to the plan proposed, and anxiously desired by all the citizens of the west end of this and the adjoining counties. B.F. Dumas, Proprietor.

Then in July of 1836, Dumas' advertisement was altered and in almost identical versions began to appear in both the Flag of the Union and in the Columbus Democrat:

A Rare Bargain in Land!

The subscriber wishing to move to Aberdeen and he has property there, will sell all his Lands, and the remainder of the unsold Lots in the town of Mill-Port, on the best of terms. He has nearly 700 acres of choice land at this place, tolerably well improved, 130 acres of it mostly fresh land, under good fences, and in good order for cultivation; comfortable dwellings and out houses, etc., with a first rate new Cotton Gin and Press. This place is situated on the Fayetteville and Tuscaloosa road, 21 miles east of Columbus, Mississippi; is a most delightful situation; high and elevated, with plenty of good spring water and running creeks all round. -- There are applications continually to purchase Lots in Mill-Port, and the town has taken a very pretty start, and must be the county site of a new made county, which must take place by a division of the old counties. The town is situated half a mile from the Luxepalilah river which is, with very small improvements, navigable for keelboats, and only a few miles from the rail road now chartered from the Tennessee Valley for Mobile Bay. Mill-Port is a great stand for a public house, and one is greatly needed.

The subscriber also has several places in this vicinity for sale, on the best of terms. Any information wanted, can be obtained by applying to James Swearingen, at Columbus, Mississippi, or to me; who may be found almost at any time at Mill-Port, Alabama. B.F. Dumas.

Further development around the new town of Mill Port was shown by U.S. Post Office records. On June 6, 1837, the Post Office department invited proposals for several new postal routes including "Mill Port to be supplied from Columbus, Mi, 21 miles and back once a week." While the written histories of Millport say it was founded in 1848, something was sure happening there in 1836 and 1837 under the name of the Town of Mill Port. It is also interesting that Dumas, who had the town laid off and platted in 1836 was not even mentioned as an early settler there. Somehow B.F. Dumas and his early Town of Mill Port were lost to history.

Thanks to both Karen and Carolyn for working with me on this story of Millport.