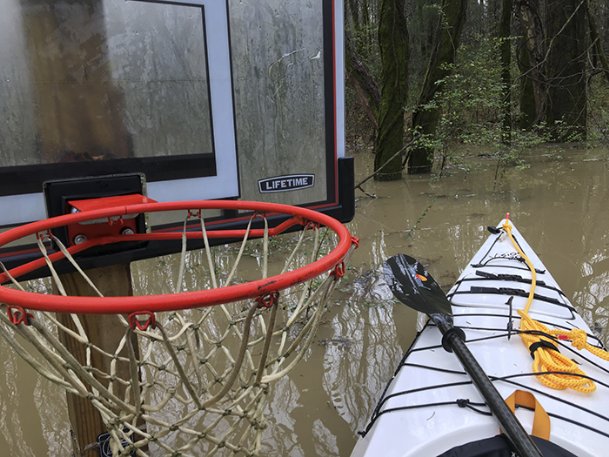 Recent downpours have forced road closings, created flooding in some areas and in one instance on Oak Slush Creek, eliminated the possibility of a pick-up game of hoops. Photo by: Birney Imes/Dispatch Staff

While battling a case of cabin fever on a cold, rainy afternoon the Sunday before Christmas, I sent Craig Hill a text asking if he wanted to go paddling. We'd had a lot of rain and the river was high.

I expected from him something to the effect of, "Are you crazy?"

Instead he wanted to know when I was leaving.

Around mid-afternoon we set out from boat landing near the start of the Riverwalk paddling upstream against a brisk current.

After navigating the swirling water where the river divides at the head of the Island, we crept along the right bank, less than a stone's throw from a muddy Riverwalk. As we approached the Highway 82 bridge, we angled over to the west bank and continued upstream.

Our destination was Oak Slush Creek about three-quarters of a mile upstream past the bridge on the west side.

If you are of a certain age and grew up here, you might remember the Tenn-Tom bridge built for the Waterway long before the Tenn-Tom became reality. The bridge turned out to be inadequate and had to be demolished to make way for the current, larger structure.

In the meantime "the new bridge," as it came to be known, was a popular nesting place for high-school lovebirds. It was not uncommon on the weekend for cars containing young spooners to line both sides of the bridge.

About three-quarters of a mile north of the 82 Bridge we turned into the creek and before turning around did battle with it for about a mile as it gushed toward the main river.

On Wednesday in more pleasant circumstances, I put in again at the largely submerged boat landing at the foot of Second Avenue South and set out on the same course Craig and I had taken almost a month earlier.

The day was warm and by the time I made it to the main channel the morning sunlight played on the trees on the west bank of the river.

The river seemed to have more current, and when I angled across it took me downstream a couple of hundred yards.

After going under the bridge, I paddled through the forest that will soon be Jan and Glenn Miller's front yard -- the Millers are building a house fronting on the river.

Later in the day I happened to see Jan at a downtown coffee house and asked if it was OK to mention her house in the column, she laughed. "I'm posting pictures of it on Facebook every day," she said. "No, we don't mind."

Oak Slush Creek, the stream that had been a raging torrent with Craig and me, was on this day a docile backwater.

The same thing happened in the Delta this past year. The water in the flooded Mississippi was so high, its bottled-up tributaries could not discharge into the river, so they backed up and flooded the region.

I took a cell phone picture of an almost-submerged basketball goal and sent electronic postcards in the form of a text to several friends.

The creek goes under Old West Point Road and then along Highway 82 before it goes behind the Shell truck stop at the Macon/Meridian exit and then parallels and eventually goes under Plymouth Bluff Access Road.

With each stroke of the paddle the creek seemed to grow narrower and the walls along its banks higher. The twisted bois d'arcs, their contact with the earth tenuous, reached out over the water, their moss-covered branches offering a thorny embrace. The trees' dangling tendril-like roots, looking like the legs of giant, orange spiders, added to the fairy-tale quality of the setting. Maybe a family of Hobbits awaited around the next bend.

No, there was only a narrow, rather prosaic rock pour-over at Plymouth Bluff Access Road where I turned around.

Once back on the Tenn-Tom with its speeding current, I was at the boat landing in a blink.

Three days later the river had dropped 10 feet and Oak Slush Creek had resumed its role as a little-noticed forest stream.