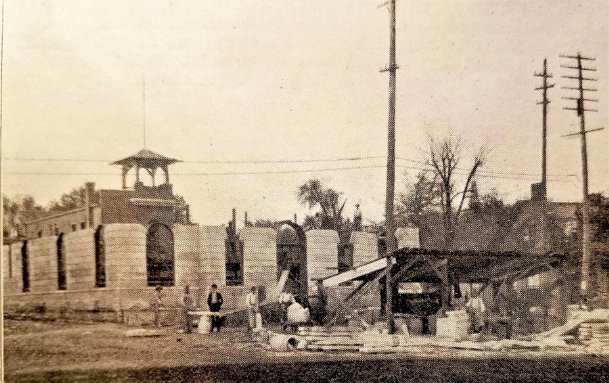 A March 1903 view of the progress on constructing the new city hall with the almost completed fire station in the rear. The first floor stone walls were of Tennessee sandstone. Photo by: Courtesy photo

R.H. Hunt's 1902 proposal for Columbus' new city hall and fire station. The fire station was completed on May 1, 1903, and the city hall on July 28.
Photo by: Courtesy image

Last week Carol Brown took her fourth grade class from New Hope Elementary School on a walking tour of downtown Columbus to discover the history found in the buildings there. They had some questions about City Hall's history and the old bell that is displayed in front of the building. The story of the present city hall opens a window to some significant changes occurring in Columbus during 1903.

By the beginning of 1902, the discussion in Columbus over the need for a new city hall had changed from "do we build one?" to "when?". There were other infrastructure needs the city had and the discussion centered on the priority to be given to each. In order for the city to have free home mail delivery, the Post Office Department required Columbus and other towns to have sidewalks and streetlights. By 1902 those two projects were already underway.

In 1902, the city council's discussion centered on building not only a new city hall, fire department and a new school for black children, but also the need to make major improvements to the city's sewer system. It was decided to issue bonds in the amount of $50,000 and undertake all the projects. There was also a need for a new post office building as for 40 years the post office had been in the Gilmer Hotel.

Architect R.H. Hunt of Chattanooga was selected to design the new city hall, and in July 1902 he submitted plans for that building, for a "fire hall" behind it and for a "new Negro school house which is to be erected in the northern part of the city at a spot near the old fairgrounds." The old fairgrounds had been the site of a Confederate military hospital that after the war ended became the first Union Academy. The wood frame brick veneered school building was the new Union Academy.

Hunt's plan that was accepted for city hall was "for a building, the first story of which is constructed entirely of stone and the second of brick." The stone was Tennessee sandstone and the brick used was steel gray with yellow buff trim St Louis pressed brick. The construction contract was awarded to W.T. Christopher on Dec. 4, 1902, for $13,345. The "fire hall" was to be of brick and built at a cost of $3,185.

Construction of the new city hall began in the first week of January 1903 with the razing of the old city hall, which had been Columbus' second. When I found the original newspaper account of clearing of the city hall lot, I got a surprise. A devastating fire in September 1854 burned two city blocks downtown, and among the destroyed buildings was Columbus' first city hall. Columbus histories reflect that at the city's request, architect and contractor William O'Neal prepared a draft plan for a new city hall in June of 1856. The new structure was on the site of the present city hall.

That second city hall apparently was not so new when it became city hall 1856. The Jan. 6, 1903 newspaper account said: "The old building which has stood at the corner of Main and Sixth Streets for so many years past, and was used first as a private residence then as a bank and finally as a city hall, will soon be but a memory. Its demolition began last week."

It appears that William O'Neal's plan in 1856 was not for constructing a new building but renovating and remodeling an existing one.

The July 28, 1903 Columbus Commercial announced the new city hall had been completed with attractive flowerpots on each side of the main entrance. However, city offices had not moved in, as their furniture had not arrived. Other occupants of the building had moved in. The post office took up the east half of the first floor. It moved there from the Gilmer Hotel building. The public library and the armory of the Columbus Riflemen were also located in the new building. (The Columbus Riflemen were a local military unit organized in 1837. In October 1916 they were deployed to the Mexican border in response to Pancho Villa's attack on Columbus, New Mexico. There they became Co. I of the 1st Miss Regiment, Mississippi National Guard.)

The new "fire hall," also designed by Hunt, was constructed behind the city hall (where it is now as a residential building) and was completed on May 1, 1903, about three months before city hall. There was a tower on it where the alarm (fire) bell was mounted. The bell in front of city hall was the city's alarm bell. However, that bell is dated 1907 indicating it was a new one replacing the old bell in use when the building was completed.

The bell was the way in which an alarm was sounded announcing there was a fire in the city. When a fire was discovered the bell was rung wildly to sound the alarm. It then was paused in its ringing before tolling the number representing the city ward in which the fire was located. When the fire was extinguished and danger past the bell would toll 12 times. The bell would toll so loud that it would be heard across the town.

In March 1903, the numbering of streets and giving numbers to houses was underway. This along with the then ongoing installation of streetlights and the construction of sidewalks were a requirement by the post office to have free mail delivery to homes in the city. It's interesting the story of the building of Columbus' city hall is also the story of major changes taking place in the town. The window into our history that can be opened by a fourth grade field trip is amazing.

I was helped with this column by Carolyn Kaye, Gary Lancaster and research done by the late Sam Kaye.