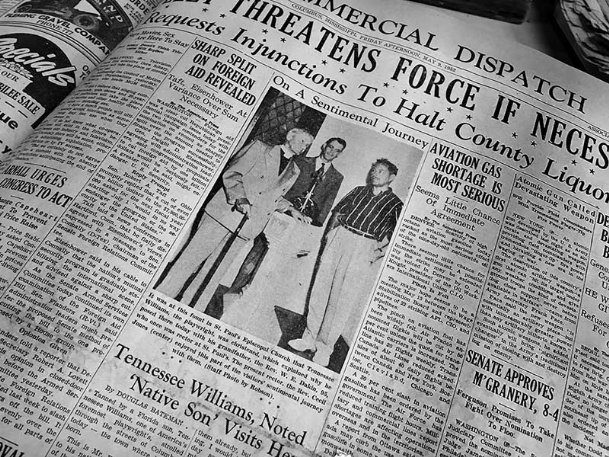 A front page story in the May 9, 1952 Dispatch offers an account of a visit by acclaimed playwright and Columbus native son Tennessee Williams and his 95-year-old grandfather, who was rector of the Episcopal Church here at the time of Williams birth.

On the front page of the May 9, 1952, edition of this newspaper, a page that has stripped across the bottom: "Week's best slogan: We'll get more done if we work together," is a story about Tennessee Williams' visit to Columbus. This was the playwright's first time back in his birthplace, according to the article, since he was 3 years old.

The story, written by Douglas Bateman, is one of several local accounts of the event.

By this time in his career, Williams had received international acclaim for "The Glass Menagerie" (1944) and "A Streetcar Named Desire" (1947), the film of which had recently shown at The Princess, according to the article.

Apparently, Bateman accompanied Williams and his 95-year-old grandfather, the Rev. W.E. Dakin, on the short walk from the Gilmer Hotel (located on what is now a vacant lot on Main at Fourth Street) to the church he served.

Writes Bateman: "As they emerged from Catfish Alley, the venerable old rector lifted his walking cane and pointed to the Episcopal Rectory.

"'There is the house where you were born,' he told his famed grandson. 'And next to it is the church I served with so much pleasure. It is almost as old as I am ...'"

The playwright's visit came after his usual winter sojourn in Key West. Traveling in his Jaguar convertible, Williams and his grandfather, were en route to Memphis with likely a stop in Clarksdale where Dakin was reassigned shortly after the birth of his grandson.

After seeing the room in the rectory where Williams was born, the group moved to the sanctuary where the Rev. Dakin reminisced about the families and the pews they occupied.

"I must confess," Williams whispered to Bateman, "I just can't return this far in memory, but I do believe this is one of the handsomest churches I've ever seen."

When told of the wealth of literary raw material in the local characters and folklore in the town of his birth, Williams said, "I believe I have met some of them already."

One of those may have been Walter Kennedy, a longtime friend of Bateman's, who after his time at The Dispatch, ran The Chimney's, a small bookstore on 11th Street South, about a half block from The W.

Kennedy's account of Williams' visit to Columbus comes via the unpublished memoirs of VP Ferguson, another vivid native son, who spent most of his adult life in Paris.

Ferguson's daughter, Katherine Kerby, is trying to organize her father's manuscript into a publishable form. What would have to be one of the highlights of the manuscript is an account of Williams' visit to Columbus.

While I -- nor Kerby -- can vouch for the veracity of the following, its entertainment value is undeniable.

This is Walter Kennedy recalling an outing to Bob's Place with Tennessee Williams as recounted by VP Ferguson:

As a distant but charming old friend, Tom, knowing virtually no one on the local scene, always looked to me when he drifted into Columbus.

Meeting here at the Gilmer where he stayed during his brief sejour, he expressed a fond weakness for cold, canned beer and 'indigenous barbecue' ... I dutifully steered him down across the river to Bob Tweet's (sic) Tombigbee Drive-In for the 'Quintessence of Southern Hickory Smoked.'

... Tennessee's initial shock upon biting into the blistering grandeur instantly changed from admiration into awe, and finally terror. As he solemnly watched me slosh on still more sauce over the inspired creation, then chew into it like the Phoenix.

In all good logic Tennessee must have reflected that my taste buds were seared out or that I was an apprentice fire eater.

Another tamer account of Williams' visit, in the Sunday, May 11 Dispatch, comes from Rachel Shute, who wrote a popular society column under the pen name Iva Tattler.

"The literati and illiterati buzzed around excitedly this weekend over having none other than famed playwright Tennessee Williams in their midst. And, we, like all who met him, were completely won over by his charm."

Rachel, rather Iva, goes on to tell about Rev. Dakin and his grandson being driven to The Cedars by Davis Patty where they visited with Mary Ita and Bailey Hardy, whom Dakin had married decades earlier.

Alas, there is no mention in Iva's account of trips to Bob's Place or "indigenous barbecue."

5. Voice of the people: Bob Raymond LETTERS TO THE EDITOR ([email protected])