Patrick Buchanan: An establishment in panic 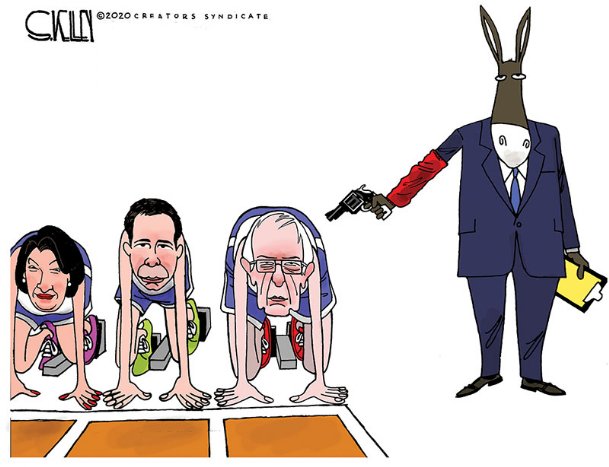 From the day he entered the race, Joe Biden was the great hope of the Democratic establishment to spare them from the horrifying prospect of a 2020 race between The Donald and Bernie Sanders.

Today, that same establishment wants Joe out of the race.

Why has Biden suddenly become an albatross?

His feeble debate performances and fifth-place finish in New Hampshire all but ensure Joe will not be the nominee, and if he stays in, he will siphon off votes in Nevada and South Carolina that would go to candidates who might put together a majority and stop Sanders.

The panic of the establishment is traceable to the new political reality.

With popular-vote victories in Iowa and New Hampshire, Sanders has largely united the left-wing of his party and displaced Biden as the front-runner and favorite for the nomination.

Meanwhile, the non-socialist wing of the party has failed to coalesce around a champion to stop Sanders and is becoming ever more splintered.

Biden, "Mayor Pete" Buttigieg, who ran second in New Hampshire, and Sen. Amy Klobuchar, who ran third and took votes that might have given Buttigieg a win in the Granite State.

Biden, Buttigieg and Klobuchar are all now headed for the Nevada caucuses on Feb. 22, where Sanders is favored. And all three will be going on to South Carolina, a state into which billionaire Tom Steyer has poured millions of dollars.

Sanders, however, is not without his own problems.

Not only is he anathema to the establishment, he cannot wholly unite his party's left-wing until his senatorial soulmate Elizabeth Warren gets out. Though she ran a poor fourth in New Hampshire, Warren is also going to Nevada to offer herself as a unity candidate.

But as Biden's hour is up, so is hers. And if she is not out of the race before Super Tuesday on March 3, she risks being beaten in her own home state of Massachusetts.

Where does this leave the Democratic field?

Two candidacies, Warren's and Biden's, are in hospice care.

Two candidates, Buttigieg and Klobuchar, competing to be the moderate alternative to Sanders, are in danger of canceling each other out.

Two candidates, Michael Bloomberg and Tom Steyer, are billionaires who will be battling on Super Tuesday to crush the scourge of billionaires, Bernie Sanders.

Bloomberg, the three-term mayor of New York, upon whom the establishment has begun to look like the last best hope of stopping Sanders, has already dumped a third of a billion dollars into his campaign

His poll numbers have risen accordingly, and he is probably the strongest challenger to Sanders now, because, with his $60 billion fortune, he can sustain himself and his organization through the convention.

But would Sanders lose gracefully to a plutocrat who deployed his billions to deny him a nomination Sanders has sought for half a decade?

Would Bernie Bros, who believe they were cheated out of the nomination in 2016, accept defeat and support a billionaire they believe robbed them of a prize they thought they had won fairly?

Bloomberg is now facing more serious matters as a candidate in a party of minorities. Here is an excerpt from an audiotape of Mayor Mike at a 2015 conference in Aspen, Colorado, addressing the crime-fighting tactic of stop and frisk that he used for years as mayor.

"Ninety-five percent of your murders and murderers and murder victims fit one M.O. You can just take the description, Xerox it and pass it out to all the cops. They are male minorities, 15 to 25," said Bloomberg.

"One of the unintended consequences is people say, 'Oh, my God, you are arresting kids for marijuana that are all minorities.' Yes, that's true. Why? Because we put all the cops in minority neighborhoods. ... Why do we do it? Because that is where all the crime is. ... And the way you get the guns out of the kids' hands is to throw them up against the wall and frisk them."

Midweek, it was learned that Bloomberg, during the economic crisis in 2008, said that getting rid of "redlining" -- a policy by which bankers routinely deny mortgages to low-income largely minority neighborhoods circled in red as risky -- was to blame for the collapse.

In remarks at Georgetown University in 2008, Bloomberg said:

"It all started back when there was a lot of pressure on banks to make loans to everyone. ... Redlining ...was the term where banks took whole neighborhoods and said, 'People in these neighborhoods are poor, they're not going to be able to pay off their mortgages, tell your salesmen don't go into those areas.'"

In presidential elections, Democratic candidates win 90-95% of the black vote. After revelations of his candid discussions of the merits of redlining and the benefits of stop and frisk, Bloomberg may have a tough time climbing that hill.