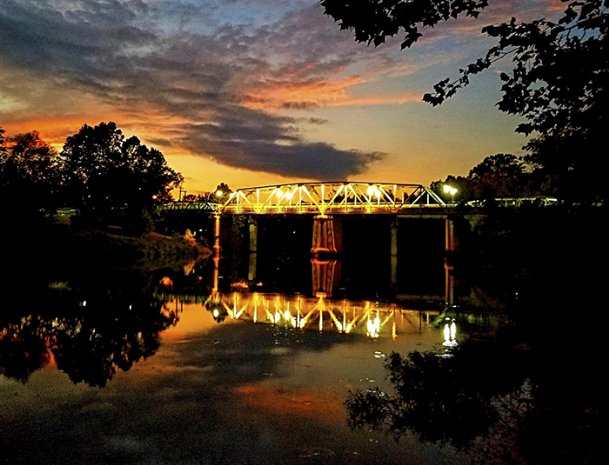 The 1928 Tombigbee River bridge at Columbus is an old swing bridge that could open to allow boats to pass. It is presently closed as a walkway due to damage that may have been caused by being struck by a barge. Photo by: Courtesy photo

The 1877 bridge at the foot of Main Street during the 1892 Tombigbee flood which crested at 42.6 feet on the old river gage.
Photo by: Courtesy photo

This past week we have seen another Tombigbee Flood and it appears a loose barge may have seriously damaged Columbus' 1928 River bridge. The current flood, though bad, does not compare with the catastrophic floods of 1847, 1892, 1948 and 1973. And if a barge did hit the 1928 bridge, that would not be the first time a vessel struck a Columbus bridge.

The first bridge at Columbus, a wooden covered bridge, was built by African-American bridge builder Horace King in 1842. The Columbus Democrat newspaper in the spring of 1846 referred to King as "a negro man ... who built our bridge here across the Tombigbee and the new one across the Luxapellilah. He is one of the best mechanics in his line in all the South."

The bridge came off the bluff at the end of Fourth Avenue South and was said to provide a 65-foot clearance above the river. Of course, at flood stage, that was not true.

On Feb. 17, 1851, the side-wheel steamboat Romeo attempted to pass under the Columbus bridge at flood stage and its pilothouse was knocked off by the bridge. Smokestacks on steamboats could often be lowered and there was no mention that the steamer had lost its stacks. Four days later, the steamer Jenny Lind sailed around the west end of the bridge, over what is now The Island, to save 1,100 bales of cotton in a warehouse threatened by flood waters at West Port. Much of West Port had itself been washed away by the flood of 1847. The bridge was removed by the mid-1850s.

In 1871 construction of an iron swing bridge began at Aberdeen. The specifications for that bridge were published in February 1871 and stated the bridge had to be constructed "in order that steamboat navigation may not be interrupted, the structure must be of that kind known as the 'swing bridge.'"

A new iron bridge at Columbus was also planned in the mid 1870s. It too was to be a swing bridge so as not to obstruct river traffic. The bridge was completed and officially accepted by Lowndes County on April 11, 1877.

By the early 1900s the Columbus bridge was showing its age and needed to be replaced by a larger, wider bridge. The old bridges at Aberdeen and Columbus had been designed to be only wide enough for two wagons or buggies to pass each other and were not designed for motor vehicles.

In 1926 construction began on the new highway bridge at Columbus. The Tombigbee was still classified as a navigable waterway and could not be obstructed so the new bridge was built as a swing bridge. After its completion in 1928, the bridge was opened to test it, but accounts that it opened a couple of other times are unverified.

The worst floods on the Upper Tombigbee were in 1847 and 1892. In the flood known as "the Great Freshet of 1847" almost the entire town of Colbert (just south of Barton Ferry in Clay County), and much of the towns of West Port (where the Tenn-Tom channel cuts old Highway 82 to make the Island) and Nashville (on the river south of Columbus), were washed away.

"Unparalleled Freshet -- Great Loss of Property &c -- The immense quantity of rain which we have had recently, commencing on the night of Thursday week last and ending the Sunday following, has caused our water courses to rise to an unprecedented height. ... All the low lands have been submerged to a frightful extent. From the foot of the hill on Main Street a sheet, or rather miniature sea of water, is spread out to the view, unbroken except by the tall trees for miles to the west. ... The steamer Putman was able Wednesday morning to take a new route. The engineer turned the bridge on the west side and steering over the old field made a shortcut across the bend, into the main stream some distance above the bridge. Where the Putman ploughed its way through water ten feet was dry land the week before. ... The Columbus Bridge is shattered a little at the west end, but the damage can be easily repaired. The bridge east of the town over the Luxapalila has been swept off. We learn it has floated down the stream and lodged against Maj. Blewett's bridge, which has been in danger, if that too has not been carried off."

The benchmark flood on the Tombigbee was in April 1892. Accounts tell how after days of heavy rain, the Tombigbee at Columbus began rising by Wednesday, April 6, and then suddenly rose 14 feet the next night. On April 14, the San Diego Union reported that: "By Friday morning it was seven feet higher than was ever known. The Black and Luxabilla creeks joined their waters with the Tombigbee and Columbus was literally an island with fully five miles of water in every direction. ... The river rose so rapidly that a great number of people were aroused from their slumbers by the rush of water through their homes."

Railroads were cut off and the Georgia Pacific had five miles of track between Columbus and Waverly washed away. Columbus' mayor and the president of the board of supervisors telegraphed Sen. John Allen and requested him to telegraph Washington and appeal for aid. On April 13, Secretary of War Stephen Elkins responded by directing that 300 Army tents be dispatched to the Tombigbee to shelter the homeless.

As the flood waters rose, rescue parties were sent out from Columbus in every available boat. Col. Baldwin, the city attorney, manned one boat with William Johnson. They had rescued seven people when swift current overturned their boat. Baldwin, Johnson and four others were able to swim to trees where they were rescued six hours later at midnight but the other three persons drowned. The flood waters were said to have reached up to Second Street at Main Street. It was estimated that in Monroe and Lowndes counties more than 3,000 homes were destroyed.

An article in the Aberdeen, South Dakota, Daily News, datelined Aberdeen, Miss, April 15th, reported that the bodies of 150 Tombigbee flood victims had been recovered and it was estimated that at least another 100 people had died. As the flood waters receded they left "a black desolate waste." The account continued: "Thousands of people are rendered homeless and the suffering is intense. A relief party has rescued a family of nine persons who had been adrift on a raft for six days without a mouthful of food. One of the party, a kid of 14 years, had become a gibbering idiot and devoured raw beef like a wild beast."

How bad was the 1892 flood? The Tombigbee flood waters at Columbus in 1892 reached 13.6 feet above flood stage on the old river gage. The current flood crested at 5.35 feet above flood stage. A photo taken in 1892 while the river was still rising showed houses at the present location of the Hitching Lot Farmers Market flooded to their roofs and water already across Third Street North at Second Avenue North. It was bad.