Possumhaw: A stranger in the reeds 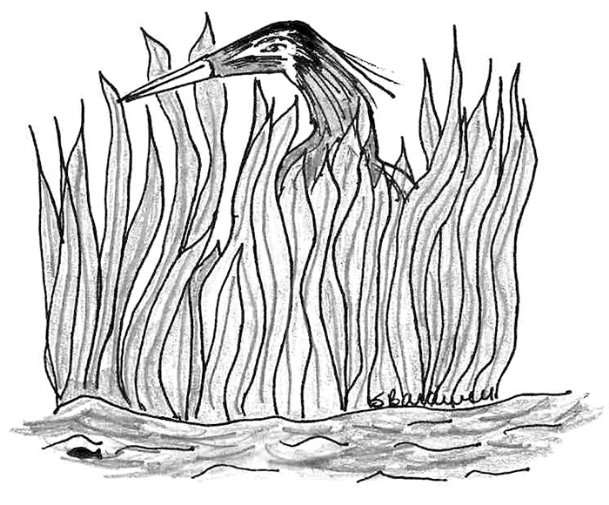 "When someone is stalking you because they think you are stalking them it makes you wonder who is really the stalker?"

Looking out the window through the light mist I saw him, a stalker. At least I presumed it was a he, it was hard to tell. He moved with such deliberateness through the reeds close to the water, slowly moving one foot at a time. His head moved backwards; then forward. He was stalking alright. I bet he was fishing. Sam doesn't allow fishing the ponds without permission. I tried to photograph him with my cell phone but he was too far away. I thought to get the camera but when I moved toward the window he was gone. Moments later he appeared again. He was stalking through the woods and up the hill. He was quite tall and thin.

My stalker wore pale blue-gray outerwear with a black cap plume and a yellow bill. After disappearing into the woods, he made his way back down to the pond and hid himself in the reeds. He was definitely fishing. With my Sibley's bird guide I confirmed my stalker was a Great Blue heron. At 46" they weigh a little over 5 pounds. I noticed he was thin. The bird never made a sound but according to Sibley's they are the loudest and most vocal of herons. They mostly sound off during flight. The sound is more like an unpleasant croaking. They are quite solitary and shy. I knew if I open a door to get closer the stalker would flee. Back and forth to the window I searched for him but he had vanished into thin air.

Sam asked why I was standing at the windows. I told him about the stalker and said it strange for the stalker to venture into the woods. Sam said the Great Blue probably thought the heavy run-off was a stream where he might find small fish. That made sense. With all the rain and the sogginess of the ground the run-off did look like streams feeding the pond, out the spillway, down the ditches, into the creeks, then the river, to the Gulf; then the ocean.

It's amazing to think our little pond on Prairie contributes waters to rivers and oceans. It's a good reason to think about what goes into the water and on the land that feeds these rivers and oceans: plastic bottles, beer and soft drink cans, cardboard boxes, plastic buckets, paper trash, sometimes shoes and clothing, even a couch, a mattress, or appliance.

I will say that the Bardwells will brake for plastic buckets on the roadside, you can never have too many plastic buckets. A few letters have been written about the trash on the roadsides. I see a lot of it driving between Starkville and Columbus. I guess, I, like other people feel it's so overwhelming where do you start? With the rain floating up more trash and leaving it in its wake, the roadsides look worse than ever. But maybe, just maybe, when spring comes maybe one person at a time could pick up one bag at a time. And we could litter no more and the waters could run pure...for the stalkers.