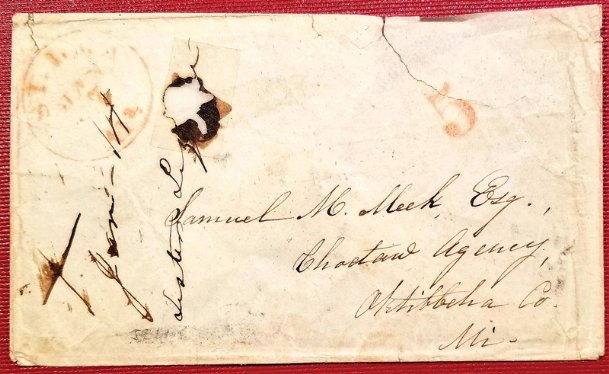 The first post offices in north Mississippi were associated with Chickasaw and Choctaw Indian agencies. The first was the Chickasaw Agency post office, which postal records show as being established in 1801. The Columbus Post Office was established on March 6, 1820. This envelope sent to Samuel M. Meek at the Choctaw Agency would date from the mid 1830s to the 1840s, as Oktibbeha County is included in the address. Photo by: Courtesy image

An 1850s illustration of the arrival in a frontier village of a stagecoach carrying mail and passengers.
Photo by: Courtesy image

Last Dec. 6 was the bicentennial of the official recognition of the Town of Columbus. However, as the Mississippi-Alabama line had not been surveyed, it was believed Columbus was in Alabama and the act mentioning Columbus was passed by the Alabama Legislature. The confusion over which state Columbus was in would continue until Jan. 3, 1821, when Mississippi Gov. George Poindexter announced that a "considerable population on the waters of the Tombigbee formerly attached to Alabama fall within the limits of this state."

One of the early signs a settlement has become a town is the establishment of a post office there. The first post offices in North Mississippi, however, were at Indian agencies. The Chickasaw Agency in 1801 is the oldest mentioned post office and was also called Hulca P.O. John Pitchlynn, the U.S. interpreter and Choctaw sub-agent was made postmaster on Aug. 28, 1819, at his residence where the post office was simply called Pitchlynn's. In south present-day Okitbbeha County was the Choctaw Agency.

While mail was said to have arrived in Columbus along the Military Road as early as 1819, the town did not have a post office at that time. At the session of Congress that convened in 1820, the need for a post office in the new town of Columbus was addressed.

The first official reference to a post office being established in Columbus occurred on Feb. 29, 1820, when the U.S. House Committee on Post Offices and Post Roads was instructed "to inquire into the expediency of establishing the following post routes in the state of Alabama." The first route mentioned was "from Tuskaloosa to Columbus in Marion County, by the court-house." The proposed act also discontinued the post road from the Chickasaw Agency to St. Stephens. On that road would have been the Post Office at Pitchlynn's (Plymouth Bluff), which had opened in August 1819, but was discontinued in 1820.

The post road act passed and was signed into law by President Monroe on May 13, 1820. On Aug. 22, 1820, Postmaster General Return J. Meigs announced proposals for carrying mail were to be received until Oct. 28, 1820, on route number 70, which was an Alabama route "from Tusculoosa by Marion c h to Columbus, once in two weeks. Leave Tusculoosa each other." According to the book "Mississippi Post Offices," by Gallagher and Patera, the Columbus Post Office was established on March 6, 1820, with Thomas Sampson as the first postmaster.

The Marion Courthouse mentioned in the early records was the house of Henry Greer, the site of which is now under a runway at Columbus Air Force Base. Greer's residence became the seat of Marion County, Alabama, on Dec. 6, 1819. In 1821 it became the first seat of Monroe County, Mississippi.

The settlement that grew up there moved across the Buttahatchie and became Hamilton. Records indicate a post office in Marion County, Alabama, named Marion, was open from 1822 to 1824. In Monroe County, Mississippi, there was a post office named Monroe, which was established in 1823 and in 1826 became Hamilton.

Because of a post office fire in Washington in 1837, many early post office records were lost. As a result, on the U.S. Post Office web page listing the dates of establishment of post offices, there is no official date given for the establishment of the Columbus Post Office. Local records and histories are also rather foggy. Historian William Love wrote that the Columbus Post Office was established in 1820 with service on the Military Road to Muscle Shoals. Oscar Keeler's 1848 history of Columbus stated that "in the single story frame house just below the Post Office (the Columbus Post Office in the mid 1820s was located on Main Street just east of the present day Elks Club building) ... on the first of January, 1821, the first mail that was ever brought to Columbus was opened by G. Lincecum, the first postmaster." Other sources state that Thomas Sampson was Columbus' first postmaster. Lincecum and Sampson were both living in Columbus by 1819.

But through congressional acts and post office accounts published in early newspapers, we find that by Feb. 29, 1820, Congress saw a need for a post road to provide mail service between Columbus and Tuscaloosa. On May 13, 1820, the President signed a bill establishing that road. The book "Mississippi Post Offices" states the Columbus Post Office was established on March 6, 1820. That date fits with the recommendations made by Congress on February 29, 1820, for Columbus-Tuscaloosa mail service.