Partial to Home: Beauty and sadness as Louisiana dissolves into the sea 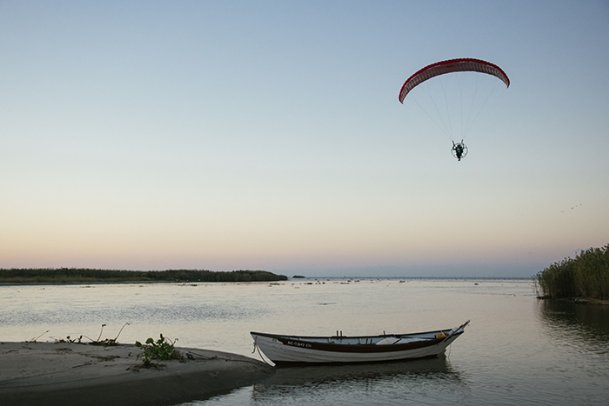 Photo by: Rush Jagoe/Special to The Dispatch

"The swamps and marshes of coastal Louisiana are among the nation's most fragile and valuable wetlands, vital not only to recreational and agricultural interests but also the state's more than $1-billion-per-year seafood industry. The staggering annual losses of wetlands in Louisiana are caused by human activity as well as natural processes."

Ben Depp is a New Orleans-based freelance photographer with a fixation on Louisiana's disappearing wetlands.

While his pictures are hauntingly beautiful -- and are sought by collectors and museum curators -- they also offer troubling evidence of the gradual disappearance of a fragile ecosystem.

South Louisiana is slowly dissolving into the Gulf of Mexico. It has been for years.

Every hour and a half, an area the size of a football field of it disappears, almost 30 square miles annually, according to the USGS.

The Mississippi River, now channelized and confined by levees, no longer makes the annual deposits that created the Mississippi and Arkansas deltas, south Louisiana and her barrier islands.

More recently the more than 10,000 miles of canals dug for oil and gas exploration and commercial and agricultural development have taken their toll. With these changes has come an increase in salinity in formerly freshwater and brackish landscapes. The result is a die-off of vegetation that is the connective tissue of this natural paradise.

To achieve his aerial perspective, Ben flies a motorized para-glider.

The para-glider resembles a narrow, arced parachute. A fan-like apparatus strapped to his back allows him to drift over this watery landscape like a modern-day Icarus. Ben estimates he's made over 200 flights since the spring of 2014.

To get to his launch site, often a place without roads, he sails in a 17-foot wooden dory named "Dancing Feather." Ben has just completed work on a dory made with cypress reclaimed from nearby Lake Maurepas. It's 18 feet, 8 inches long and named "Bebette."

To be precise, his boat is a Swampscott dory:

"The Swampscott dory is a traditional fishing boat, used during the middle of the 19th century by fishing villages along the North Shore coast of Massachusetts centered on Swampscott. It is designed to be launched off the beach." -- Wikipedia

Ben, often in the company of fellow photographer Rush Jagoe, sails and rows the dory loaded with camping gear to a remote area in the wetlands of the Mississippi or the Atchafalaya. There they will camp a week at a time, sometimes longer. The beach serves as his runway for the paraglider.

To see more check out their Instagram site: @swampscott_dory.

While the forays to these primeval landscapes are spiritually nourishing, there is an element of sadness to them.

"When I'm flying I often have this feeling of overwhelming beauty with this deep sadness for what's been lost," Ben told producers of The Great Big Story in a recent video featuring him and his work. https://www.greatbigstory.com/stories/spotlight-wing-and-a-prayer

These vegetative buffers, these wetlands and barrier islands, serve as speed bumps for incoming storms and hurricanes. With their disappearance, so goes the protections they afford.

"I love New Orleans," Ben says in the video, "but I try to be realistic about living here. One major hurricane without the protection of the wetlands (and) we'll all be finding a new place to live."

On a recent visit to New Orleans, I went sailing with Ben.

We trailered Bebette out Highway 90, east of the city, to the Rigolets, an eight-mile-long deepwater strait that connects Lake Pontchartrain with the Gulf.

The day was sunny and bright. And windy.

The waves pounded against the dory, which at times leaned on edge.

The broad-beamed little boat seemed to take the pounding in stride. After a mile or so in open water, we took refuge in the avenues of a marshy island.

There the water was calm. Even with the sail lowered, the wind gently pushed us along. Eventually we had to row.

We weren't the only sentient beings enjoying the protections and pleasures of the marsh. Flocks of birds flitted about. We saw evidence of deer and alligator. For these creatures on this warm, sunny day, this was paradise.

And so it was too for the two human intruders rowing a modest sailboat through it.