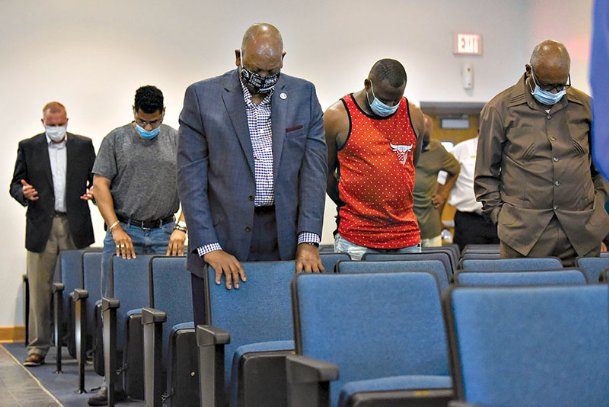 Members of the audience bow their heads in prayer to end the Policing in Columbus town hall meeting on Tuesday at the Columbus Police Department. About 30 people sat in the audience during the town hall. Photo by: Claire Hassler/Dispatch Staff

A rose to the citizens we've seen out picking up trash from our streets and roadways. In recent weeks we've seen couples patrolling downtown streets with garbage bags and reacher grabbers in the early morning. What an excellent way to start the day, exercising and beautifying your hometown. That's something we all can do, even if it's only the streets by our homes.

A rose to the five (of seven) members of the Golden Triangle legislative delegation who are on record in support of removing the current Mississippi flag, especially Republicans Sen. Chuck Younger and Rep. Rob Robertson, for whom the stand may cost them the support of many of their constituents. Whether the political risk is large or small, these legislators -- Younger, Robertson, Rep. Kabir Karriem, Rep. Cheikh Taylor and Sen. Angela Turner-Ford -- are on the right side of the issue. The current flag, with its prominent Confederate imagery, was adopted by the Legislature -- as has been true of all of the state's flag -- as a part of Jim Crow legislation established to disenfranchise Mississippi's large black population. It's past time to remove this vestige of Jim Crow. These legislators recognize that and they also recognize it is their responsibility to do it. The flag was created by the Legislature. It should be removed by the Legislature as well.

A rose to the Columbus-Lowndes Public Library System (CLPLS) which kicked off its first "StoryWalk" Saturday as part of its 2020 Summer Library Program. The StoryWalk are free and held at Propst Park, the Columbus Soccer Complex, and the Ola J. Pickett Park until Friday. The program is a part of the library's efforts to maintain its reading program during COVID-19. Children will move through the park, following the story, which will be printed on placards along the route. Another StoryWalk, with a different story, will be held July 11-19. This is an excellent idea to combine fitness with reading while serving as a precaution during the pandemic. Those interested in learning more about the StoryWalk should contact Tori Hopper at [email protected] or 662-329-5300.

A rose to Columbus city officials, whose response to the controversial dismissal of a manslaughter charge in the 2015 shooting death of Columbus man Ricky Ball has been timely and on-point. Although local officials had no role in dropping the charge against former Columbus Police Department officer Canyon Boykin, local leaders moved quickly to assure Columbus residents that information about the case would be released to the public. District Attorney Scott Colom has started that process already. Meanwhile, the city held a town hall Tuesday with Police Chief Fred Shelton, Mayor Robert Smith and others explaining police procedure and answering questions about the Ball case and policing in general. We believe the city's actions have helped tamp down the righteous anger some feel, while promoting a positive and peaceful atmosphere at a time when all police departments are taking an introspective look at procedures. As Colom noted, the door to justice for Ricky Ball may be shut, but the door to truth remains open.

A rose to Mississippi State's Psychology Clinic for providing telehealth services to those in the community for whom the COVID-19 crisis has created psychological stress. The "Telehealth at the Psychology Clinic," utilizes an online format and includes individual, couples, group, family, and behavioral sleep therapy services. To initiate services, individuals can call the clinic at 662-325-0270. We applaud these efforts and encourage people who may be having difficulty handling the stresses created by the virus to avail themselves of this program.

3. Voice of the people: Paul Mack LETTERS TO THE EDITOR ([email protected])

5. Froma Harrop: How America got so inferior NATIONAL COLUMNS