Partial to Home: Life lessons from the bee yard 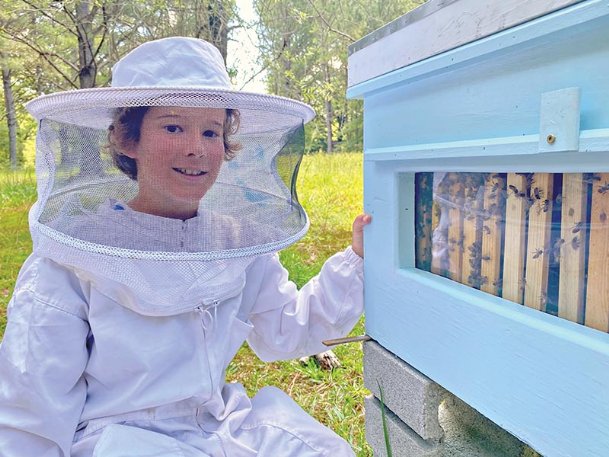 Charlie Sanders, 10, sits next to one of three hives he tends at his home in the Craig Springs community near Sturgis. Charlie, who has been tending bees for about a year makes and sells candles from the wax bees produce. Photo by: Birney Imes/Dispatch staff

On a recent Saturday morning as I walked into the Starkville Community Market, a young boy, his blue baseball cap askew over curly brown hair, asked if I'd like to buy a beeswax candle.

As I reached for my wallet, I asked the young entrepreneur where he gets his beeswax. Turns out he's a beekeeper. He has three hives and has been keeping bees for a year.

This is how I met Charlie Sanders, 10 years old, formerly of Starkville, now of the Craig Springs community near Sturgis

Charlie's mom, Mandi, who is an herbalist, was nearby and okayed Charlie's invitation to visit his bee yard.

And so it was on a recent morning, my 10-year-old granddaughter, who has up-close experience with the apis mellifera, and I were driving down a gravel road tightly bordered by rows of sweetgum, oak and pine.

As our track took a 90-degree turn to the right, we kept straight and happened upon the cutout of a gold crescent moon leaning against a pine tree, an understated welcome to Magnolia Moon Herb Farm, the sanctuary of the Sanders family.

Charlie comes with a generous supporting cast most of whom were in the yard saying good-bye to a departing guest as we pulled up. In addition to mom, Mandi, and dad, Will, there's little sister, Luna, and big brother, Tripp. Two dogs, June and Indie, and two cats, Harvest and Carrot.

After introductions, we began our tour.

The production facility for Flying Arrow Candles -- "I like archery and how the name sounds," explained Charlie -- is the side porch of the house. He showed us how he makes candles using rubber cupcake moulds -- don't laugh, Charlie grossed $80 at the market the Saturday we met.

After the candle-making tutorial, we traipsed out to the hives, about 100 yards from the house.

Many keepers of bees, at least in the beginning, rely on a mentor. Charlie's mentor, Ali Pinion, was also his inspiration for becoming a beekeeper.

"I saw Ali doing it (tending bees) wearing one of her suits," he said. "I thought it was fun, and it is amazing how bees work together."

Pinion, a longtime friend of the Sanders family, had put a hive at their home.

"Charlie is a very inquisitive child," she said.

Pinion teaches beekeeping to a group of home-schooled kids at the Homestead Educational Center, a Starkville non-profit that promotes sustainable lifestyles and a more healthy relationship with nature.

Charlie, who is homeschooled, helps his mentor with her presentations.

As a beekeeper, I'm always asked about bee stings. I wondered how Charlie fielded that question.

"Bee stings are actually medicine," Charlie said, referencing the practice of apitherapy. "They hurt at first, but not as much (after a little while)."

After our bee talk Charlie and his mom gave us a tour of their eight-acre wonderland with its small lake and woods, an outdoor haven for children like Charlie, who enjoy "camping and playing in the yard a lot."

We walked through a small orchard lush with fruit, a condition Mandi credits her son's bee hives.

"Blueberry bushes, pears, blackberries, everything is bigger this year," she said.

Mandi makes no secret of her delight in the responsibility her son has assumed since becoming a beekeeper.

"Charlie has always loved to help with a project," she said, "but this being his responsibility, it's different. He'll come down the stairs in his bee suit and say, Mom, I'm going to do such and such with the bees.

"Most mornings before I'm up or had coffee, he's out in the yard making candles or straining wax," she said.

Saturday morning, I called Charlie with a few more questions. He was about to embark on a camping trip.

What advice would you give someone who is considering becoming a beekeeper?

"It's fun and it's easy, but it does require some work and money to buy a beehive," he said. "You get honey and beeswax, and both of those things are good."

What lessons have the bees taught you?

"I've always been mindful of flowers. I've noticed the bees favor clover. Whenever I mow the yard, I'm careful not to mow wildflowers."

It's difficult to predict the future, but do you see yourself as a beekeeper for years to come?

"Yes, I really do. I want to be a chef and beekeep on the side."

Have you enjoyed beekeeping thus far?

I thanked Charlie for taking the time to talk.

"Thank you for interviewing me," he said.

3. Voice of the people: Loden Snell LETTERS TO THE EDITOR ([email protected])