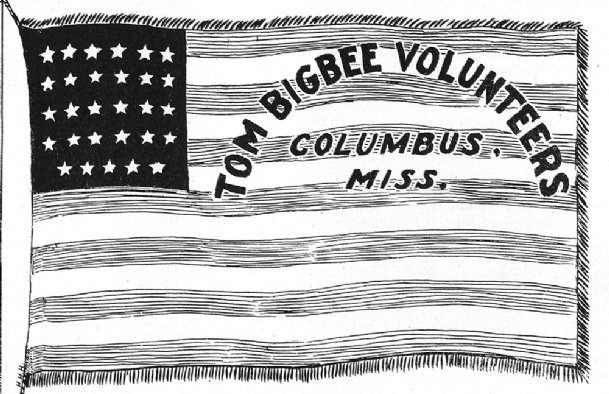 The Mexican-American War flag of the Tombigbee Volunteers of Columbus as illustrated in the 1904 publication, Texas Today. The original flag is now at the Mississippi Department of Archives and History in Jackson. Photo by: Courtesy image

The 1st Mississippi Regiment, better known as the Mississippi Rifles or Riflemen, stood fast at the Battle of Buena Vista and scaled the walls of a Mexican fort at Monterey during the Mexican American War in 1846 and '47. Among the heroes of the 1st Mississippi were Lt. Christopher H. "Kit" Mott of Co. I, the Marshall Guards of Holly Springs, and Lt. Col. Alexander McClung, the former Captain of Co. K, the Tombigbee Volunteers of Columbus.

At the storming of a Mexican fort at Monterey the official report cites Lt. Col. McClung as the first American "to gain the parapet." Col. Jefferson Davis then wrote, "turning to the regiment (McClung) waved his sword over his head in that position to cheer his men on to further danger." Shortly afterward McClung was seriously wounded. Davis also referred to the gallant actions of Lt. Mott.

The other flag of the 1st Mississippi Riflemen was in the Columbus home of Mrs. John Billups. Mrs. Billups' first husband had been Christopher Mott. The Marshall Guards were commanded by Capt. Alexander Bradford, and upon his promotion to major by Capt. James Taylor. The lieutenants were Christopher Mott, Samuel Dill and W.E. Epps.

During the Civil War Mott was colonel of the 19th Mississippi Regiment and L.Q.C. Lamar was lieutenant colonel. In 1862, Jefferson Davis authorized Mott's promotion to general but he was killed at the Battle of Williamsburg before the orders arrived. Lt. Col. Lamar then assumed command of the regiment.

Mrs. Billups placed the flag on display at the 1884-85 World's Industrial and Cotton Centennial Exposition in New Orleans. Jefferson Davis wrote her that due to his health he could not go and again see the "flag that would have revived so many conflicting memories." He further stated, "I am glad it was placed on exhibition by one who bore such near relations to my gallant and dear friend Gen. Mott ...."

In 1903, both Mrs. Billups and Mrs. Tamplet claimed each of their flags was the regimental flag of the 1st Mississippi Regiment. On February 25, 1903, an article appeared in The Columbus Dispatch discussing the flags. An account by Mrs. Tamplet with an illustration of her flag then appeared in a 1904 publication titled "Texas Today."

To try and settle the question of the flags, the issue was turned over to former Confederate Gen. Stephen D. Lee. On May 1, 1907, Lee wrote a lengthy letter discussing the flags and the use of flags in pre-Civil War Southern military units.

Lee related how each company had its own flag that would have been "presented to it by the ladies of the locality from which the company came." However, "when a regiment was mustered into the United States service, only one flag was borne, and the flags were sent back, or stored away for safe keeping." Only "the United States colors -- the stars and stripes" went into battle.

However, Lee found a tradition which stated that one other flag was selected to serve as the regimental flag and was carried by the left of center company into battle. Lee added that his investigation showed that Co. K, the Tombigbee Volunteers, was not in the front lines at the Battle of Buena Vista and therefore could not have been the left of center company. He found another tradition which said that Co. I, the Holly Springs company, carried the 1st Mississippi Regiment's flag into battle.

It was Lee's belief that the Holly Springs flag of Mrs. John Billups in Columbus was the regimental flag of the 1st Mississippi Riflemen and that Mrs Tamplet's flag, though historic, was only the company flag of Columbus' Tombigbee Volunteers.

Mrs. Billups' flag hung for years at Snowdoun in Columbus and eventually passed to the Billups-Garth Foundation. The foundation presented the flag of the 1st Mississippi Riflemen to the Mississippi Department of Archives and History to be displayed in the State Historical Museum. It was still in the frame in which it had been displayed at the 1884 Cotton Exposition in New Orleans and is on display in the Museum of Mississippi History.

Today we are also seeing a flag controversy. Should we adopt a new state flag? It is amazing how little public interest was shown in having the state adopt the present flag in 1894 in contrast to today.

Today those opposed to changing the flag speak of their heritage and its ties to the flag. That heritage is not a heritage celebrated by a large segment of Mississippi's population. It is my heritage, though, for as I wrote last week my great-grandfather was the color bearer for Company A, 43rd Miss. Infantry Regiment when the Civil War commenced and I have inherited flags of the United Confederate Veterans of Lowndes County. I know heritage and I know that after the Civil War my great-grandfather wanted unity and not division.

I also know that some leaders of the Confederacy promoted unity and racial reconciliation after the Civil War. While many know of Robert E. Lee's desire for unity, few realize that even Nathan B. Forrest also changed his views and position. Forrest was an early member and probably a leader of the Ku Klux Klan. However, it is little recognized that he disassociated himself and ordered the Klan to disband when it became violent. By the early 1870s, he was even quoted in an interview in a Nashville newspaper as calling for more and better educational and economic opportunities for the freed slaves.

Before his death, Forrest was becoming increasingly criticized by some white Southerners for his efforts at racial reconciliation. According to the New York Times "his last notable public appearance was on the Fourth of July in Memphis, when he appeared before the colored people at their celebration, was publicly presented with a bouquet by them as a mark of peace and reconciliation, and made a friendly speech in reply."

If former Confederate generals such as Lee and Forrest sought reconciliation and unity after the war, why can't we do the same and change the flag? It's past time we had a flag that represented all Mississippians and it looks like the Legislature is going to do that. It is the right thing for Mississippi to do.