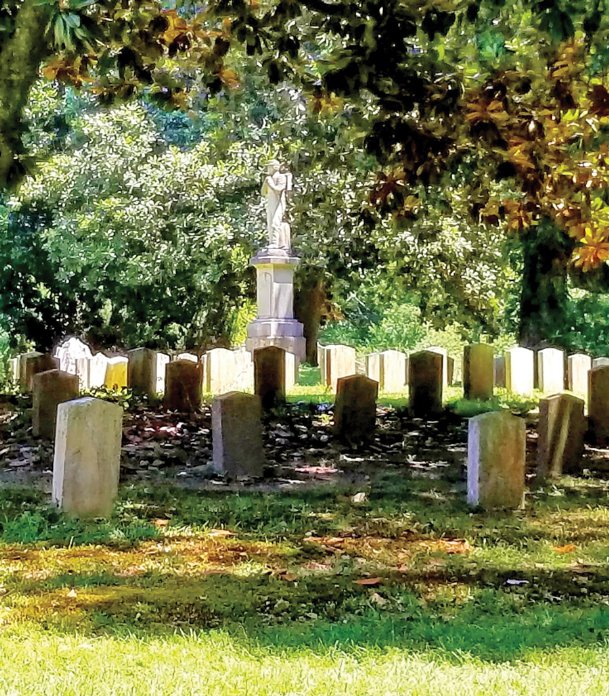 According to an 1877 newspaper article, there are unmarked graves of federal soldiers who died during the Civil War buried near these confederate graves in Friendship Cemetery. However, enough space appears to exist between those graves and the Confederate graves that the Confederate monument at the courthouse could fit on that historic and sacred ground. Photo by: Courtesy photo

Last week the subject about possibly relocating the Confederate monument at the Lowndes County Courthouse to a possible location at Friendship Cemetery came up.

The monument was an early 1900s project of the United Daughters of the Confederacy and was erected in 1912. It was initially intended to be a memorial to those Confederate soldiers from Lowndes County who had died during the war. The original plan was to put it on Main Street and not at the courthouse. When the preferred sites on Main were unavailable, it was decided to temporarily place it at the courthouse until a better location was available. As late as 1921 there was an article in the Commercial Dispatch about the monument's courthouse location having been temporary and possibly moving the monument.

In reviewing possible sites at Friendship for the monument, an open space to the west of the south Confederate burial plot looked promising. However, there was a concern that somewhere in that area might be unmarked graves. I met with the mayor on Wednesday at the southwest corner of the cemetery, and we discussed possible sites for the monument. While that corner of the cemetery next to Confederate graves appeared to be the most appropriate location for the monument, there probably are unmarked federal graves there.

There were about 40 federal soldiers buried in Friendship Cemetery during the war, and though most were removed, some remained in unmarked graves. Over the years the exact location of the unmarked graves was forgotten as the older generation died and took with them the grave's location. As the location of the federal graves faded, records were found that said the Union soldiers buried in Friendship Cemetery had been moved to Corinth National Cemetery in 1867. It was assumed that all of the federal soldiers were moved.

Research by Carolyn Kaye and Gary Lancaster discovered that as many as ten unmarked federal graves were overlooked in 1867 and remain in Friendship Cemetery. These were the federal soldiers whose graves continued to be decorated along with the Confederate graves by the ladies of Columbus through 1919.

During the Civil War, Columbus was a major Confederate hospital center. More than 2,100 Confederate soldiers, and at least 51 Union soldiers, died and were buried here. In 1867, 32 federal soldiers from Friendship Cemetery and nine from Sandfield Cemetery were removed to Corinth National Cemetery.

Columbus newspaper accounts of Decoration Day in 1877 record some federal graves remained at Friendship Cemetery and were still being decorated by ladies of Columbus. The federal graves were described as being without headstones and in the "far corner of the cemetery." That ceremony was at the 1873 memorial marker midway between the two Confederate sections. Standing at that spot the far corner of the cemetery is the open space under consideration. In 1919 those Union graves were still being decorated with the Confederate graves on Decoration Day.

In October 2017, field work took place on a project to locate the lost federal graves. The Center for Archaeological Research at the University of Mississippi employed non-invasive remote sensing technologies, including ground penetrating radar, to search for the graves.

These graves are especially significant for the role they played as an inspiration for the creation of Memorial Day, which evolved out of ideas and ceremonies in many towns across the United States. The claims of Columbus, Georgia, and Waterloo, New York, both have some validity. The role of Friendship Cemetery appears not to be where the idea originated but to have been the national inspiration for a day of reconciliation and remembrance.

In 1866 the New York Tribune reported: "The women of Columbus, Mississippi, have shown themselves impartial in their offerings made to the memory of the dead. They strewed flowers alike on the graves of the Confederate and of the National soldiers."

That account inspired Francis Miles Finch to write a poem, The Blue and the Gray, which was published in the September 1867, Atlantic Monthly and dedicated to the ladies of Columbus. That act of compassion by the ladies of Columbus, Mississippi, was recognized by President Obama in his 2010 Memorial Day Address when he said; " On April 25, 1866, about a year after the Civil War ended, a group of women visited a cemetery in Columbus, Mississippi, to place flowers by the graves of Confederate soldiers who had fallen at Shiloh. As they did, they noticed other graves nearby, belonging to Union dead. But no one had come to visit those graves, or place a flower there. So they decided to lay a few stems for those men too, in recognition not of a fallen Confederate or a fallen Union soldier, but a fallen American."

The Ole Miss archaeological team, headed by Dr. Tony Boudreaux and assisted by local historian Gary Lancaster, worked for four days using non-invasive remote sensing technology to produce an image of what is underground. The equipment used included ground-penetrating radar and a magnetometer, which measured differences in underground magnetic fields as would be caused by a grave shaft.

The results were inconclusive but very interesting. In their report, Stephen G. Harris and Edmond A. Boudreaux III found that the area, in which we believed the Union graves to be "... did not produce any conclusive results. A large anomaly in this area showed up in both the magnetic gradiometer and the GPR. In the mag data this anomaly appears ferrous indicating a possible drainage or pipeline. However, in the GPR data this anomaly appears as several smaller independent anomalies. The exact identification of these anomalies is uncertain, however it is possible that these anomalies are burials."

The anomalies are located at what in 1877 would have been the "far corner of the cemetery." They are also near the Confederate graves that were being decorated when the ladies of Columbus noticed there were no flowers on the unmarked federal graves and placed flowers on them. Somewhere at Friendship Cemetery are unmarked federal graves, and the documentary evidence points exactly to where the ground penetrating radar located a linear anomaly that could possibly be graves. The Confederate grave plot on the south side of the cemetery was also surveyed. The results there were much clearer and also very interesting. That data indicates there are probably twice as many graves as headstones.

Those lost Union graves, and the story they tell, are the real meaning of Memorial Day. They are American heroes who gave their lives for their country and rest beside Confederate heroes. Though once these soldiers fought on opposite sides, they all share the same sacred earth. The reconciliation of North and South began with the simple act of ladies in Columbus, Mississippi, placing flowers on the graves of all soldiers buried in Friendship Cemetery, Union and Confederate. It is a historic place and a place where monuments tell a sad story but a story we all should know.

On Thursday the mayor and city officials met with Carolyn Kaye, Gary Lancaster and me (we had all helped with the Ole Miss survey) at the cemetery. With the help of an overlay provided by Neel-Shaffer Engineering, we were able to determine there was enough space between the possible Union graves and the Confederate graves for the Confederate monument to fit. While that appears to be the best and most historic location to relocate the monument, preserving its original intent to be a memorial to those who had died, there remains a question of the site being accessible to the equipment that would be required to place the monument there.

While I know and understand the opposition to the monument being moved, I appreciate the mayor's efforts to try and see that when the monument is moved it is placed in a historic setting that would be appropriate.

4. Voice of the people: Cheryl Arnold LETTERS TO THE EDITOR ([email protected])

5. Voice of the people: Paul Mack LETTERS TO THE EDITOR ([email protected])