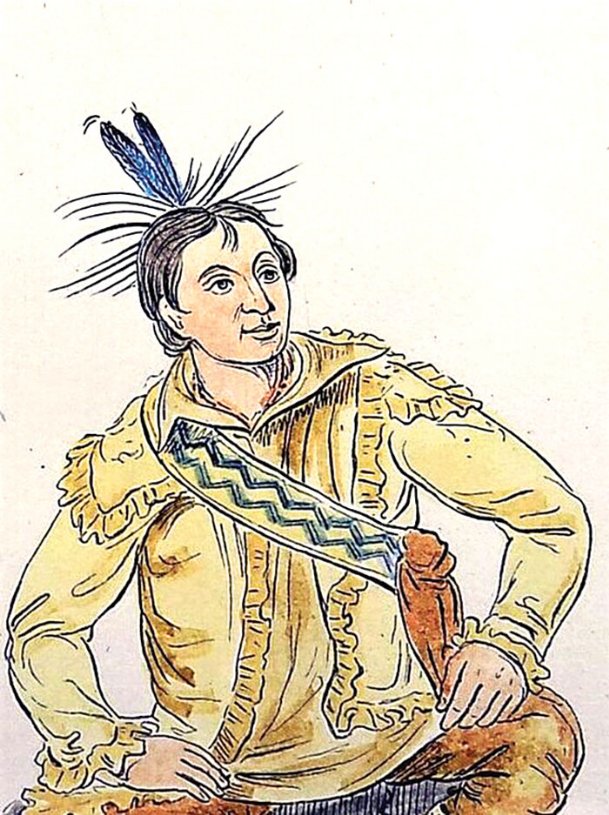 Peter Pitchlynn, whose 1846 letter described his fatherâs fort at Plymouth Bluff during the Creek War 1813-1814. This 1842 engraving is from his 1834 portrait painted by George Catlin. Photo by: Courtesy photo

John Pitchlynnâs log blockhouse near his residence at Plymouth Bluff was known as Fort Smith in 1813. Drawing by John Dunaway courtesy of Carolyn Kaye.
Photo by: Courtesy photo

In early August 1813, hostilities with the Creek Indian Nation were rapidly escalating.

John Pitchlynn's residence at Plymouth Bluff was the closest Choctaw settlement to the Creeks, and in response he fortified his residence. It became known as Fort Smith.

Few people are aware of the significance of this historic site, which is only about four miles northwest of present-day downtown Columbus. It is, however, the only Mississippi site listed in the 2007 National Park Service "Report to Congress on the Historic Preservation of Revolutionary War and War of 1812 Sites in the United States" as a preservation priority site needing further study.

John Pitchlynn was appointed U.S. interpreter for the Choctaw Nation by President George Washington. He also served as Choctaw Subagent and often as acting Choctaw Agent. He had moved his residence from the Noxubee River, near present day Macon, to Plymouth Bluff at the mouth of Tibbee Creek in 1810 to help facilitate the movement of U.S. goods down the Tombigbee River.

In 1810, Mobile was still under Spanish control and the Spanish there were restricting the movement of U.S. military supplies the up the Tombigbee River past Mobile. Between 1810 and 1814, four major shipments of U.S. goods that had originated in Pittsburgh passed down the Ohio and Tennessee rivers, then overland to Pitchlynn's, and then by river to the U.S. Choctaw Factor at St. Stephens on the lower Tombigbee.

The fort was probably named after Capt. George Smith of the Tennessee Militia (he was married to a niece of Andrew Jackson) who in the fall of 1813 had accompanied Col. John McKee to Pitchlynn's. Col. McKee credited Pitchlynn with securing a U.S.-Choctaw alliance against the Creeks in the fall of 1813.

Pitchlynn's home was referred to in the Creek Indian War correspondence of Andrew Jackson, Gen. John Coffee, Col. John McKee and Choctaw Factor George Gaines as a U.S. supply depot and meeting place for U.S. officers and Choctaw leaders, as well as one of the assembly points for the marshaling of Choctaws and Chickasaws prior to their January 1813 invasion of the Creek Nation in support of U.S. military operations.

Peter Pitchlynn, later a governor of the Choctaw Nation, recalled two occasions when the fort was approached by Creek war parties who withdrew upon finding it well defended. The fort consisted of a two-story log blockhouse surrounded by a wooden palisade and containing at least one cannon. At the request of Andrew Jackson, there was a guard composed of U.S. troops stationed there. Those troops were in addition to 20 Choctaw warriors already sent there for protection by Mushulatubbee, the principal Choctaw Chief of the Northeast District of the Choctaw Nation.

As the Creeks were driven south and no longer a threat to Pitchlynn's, John Pitchlynn served with the U.S. forces in the West Florida campaigns, including Andrew Jackson's capture of Pensacola in November 1814. Pitchlynn served as adjutant and interpreter for Major Uriah Blue of the 39th U.S. Regiment. The 39th, including a company of Choctaws, had taken part in the main assault that took Pensacola. Major Blue's regiment with Pitchlynn and its company of 53 Choctaws under Pushmataha then defeated and captured most of the remaining hostile Creeks ending the Creek War.

Among the notables to stop at Pitchlynn's for supplies was David Crockett in October 1814. In one of those little told incidents of history, Crockett, as a member of Major Russell's "company of spies," arrived at Pitchlynn's looking for Gen. Coffee's Second Division of Tennessee Volunteers for whom they were to have been serving as scouts. Coffee had passed through a week earlier.

The last military activity at the fort occurred in early 1815 when Pitchlynn fired the fort's cannon to celebrate the end of the war. The cannon exploded and Pitchlynn then commented, "Well we have no further use for her -- she has served us through the war and busted in telling us the news of peace."

Pitchlynn's became a post office 1819. However the post office moved to Columbus in 1820. The Town of Plymouth was established there in 1832, but by the mid-1850s it was all but abandoned. Today its site is on the west bank of the Stennis (Columbus) Lock and Dam. The MUW Plymouth Bluff Center, which contains excellent cultural and natural history exhibits, is located just south of the fort site.

What was it like at Plymouth Bluff during that time of war? In a Sept. 23, 1846 letter, Peter Pitchlynn recalled his childhood at his father's fort during the Creek War:

"... None were more exposed than we were to the tommahawk & scalping knife of the Creek Indians [being] then the farthest settlement towards the Creek nation who you know had espoused the cause of England -- which brought them in conflict with the Choctaws as well as the people of the United States. Twice had they come to attack us, but finding we were Forted and probably from a belief we were very strong in numbers they retired without making an attack upon us. I recollect how often we were alarmed by news reaching us that signs of the enemy were about us. One time Mother fled with us/the children to Yakmittubbe's about ten miles off. The alarm was great, brother James came up in full speed (father was not at home) with news that he had heard the war hoop of the Creek Indians. Brother Joseph remained in the fort, being some four years older than myself. He said that if he was not able to fight he could run bullits for those that could fight. Mother cryed when she left him, but not without encouraging him to be brave upon which Joseph painted his face and said he would die defending the Fort. ...The past how they crowd upon my mind, and how vivid are the recollections of my youth. I can without the least mental effort see the old homestead as she appeared during the war, ... and the war fires blazing on her hills. The war dance, the war talks and many a brave and na humma, long dead now rise up in my mind. What brave noble fellows they were. They had come to the protection of my father, and family, and they would have fallen & died around our little fort ere they would have allowed a Muskoke reaching us with their Tomma hawks among those who figured in those scenes how few are living."

The exact location of Pitchlynn's fort is lost to time. The last record of its location was in the 1930s. Around 1920, surveyor C.L. Wood found at the site of the old fort the broken end of a cannon that fired a 3-inch diameter shell. Cannons firing a 3-inch shell were in use during the War of 1812. It was a busted cannon as had protected Fort Smith only to explode announcing peace with England in 1815. This column is based on research by Jack Elliott, the late Sam Kaye and me. A detailed account of the fort was published by Jack in the Winter 2000 Journal of Mississippi History.

2. Voice of the people: Paul Mack LETTERS TO THE EDITOR ([email protected])

3. Voice of the people: Cheryl Arnold LETTERS TO THE EDITOR ([email protected])

4. Froma Harrop: What does it really mean to be pro-life? NATIONAL COLUMNS

5. Voice of the people: James Hodges LETTERS TO THE EDITOR ([email protected])