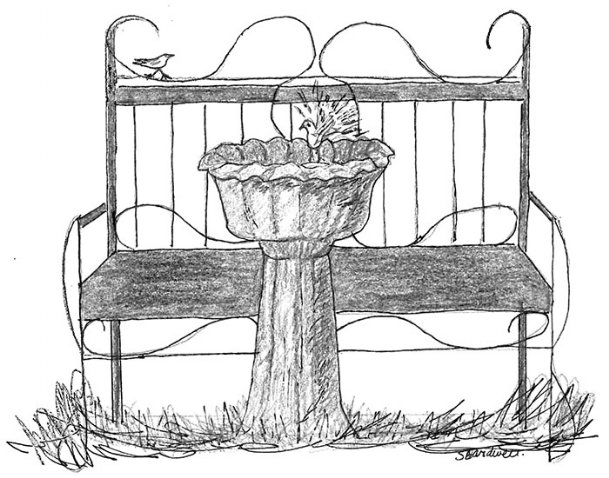 Finally, a much-needed rain. The ground is deep with cracks, wide as a quarter. Until recently the trees were lush with leaves, the grass was healthy and flowers were blooming, nurtured by morning dew and evening rains. But lately the ground cracks and furling leaves prove dry. Thankfully, we'd had a rain shower from out of nowhere. The kind of shower that waters your neighbor's lawn and fields but not yours. And if you're lucky, the next day you get the watering and maybe they don't, or maybe you both get lucky.

Looking out the windows off to the west, I could see the rain gauge hanging on the fence post. On top of the rain gauge's yellow funnel, a bird perched. He'd lean over and peer into the little pool of water sitting 8 inches below at the quarter-inch mark. So close, but no way to get to it. He flew away, dry and thirsty.

For days I'd watched the birdbath from the window. About mid-afternoon, a bluebird pair and later a tufted titmouse couple would show up for bathing. The gentlemanly male always let the female go first. She'd dip down in the water and flitter her wings around, splashing her little heart out. Soon she'd fly away to a perch on the nearby bench and wait. When he finished his bathing, the pair would fly off together, often resting on a telephone wire above the driveway. The tufted titmouse couple would follow suit.

Though I had been watering the flowerbeds faithfully, it wasn't enough. Attempting to turn a spade in the hard ground, I found my watering had nourished only a thin layer. It was time for sprinklers and a good, long soaking.

In the present world of technology where you can "zoom" or "duo call" with people around the world, it seems so ordinary to fasten an old metal sprinkler to the end of a green rubber hose, drag it across the yard and turn the well water on at the spigot. Sometimes the sprinkler turns with no help, and other times it needs a little nudge. The four arms of sprinkler turn a dizzying round and round, soaking the ground for about a 10-foot radius.

While the sprinkler watered, I went to check the Carolina wrens' nests. One was in the hanging plant on the porch and the other in a potted plant in the perennial garden. I deftly tilted each plant back so I could see into the nest. Wrens cleverly build their nests with a rain covering over top. Both nests were empty- no bird -- no fledglings, no eggs, no broken shells.

My heart sank, until I read birds rid their nests of the broken shells. It's thought to protect the fledglings from injury and also to attract any predators away from the nest to the discarded shells. Hardworking clever little wrens, they are. Perhaps now the mother wrens will join the titmouse and bluebird and dip and dive through the sprinkler or gather together at the birdbath.

1. Voice of the people: James Hodges LETTERS TO THE EDITOR ([email protected])

2. Leonard Pitts Jr.: Can we still be a country? NATIONAL COLUMNS

3. Other Editors: Forget what they said in 2016 NATIONAL COLUMNS