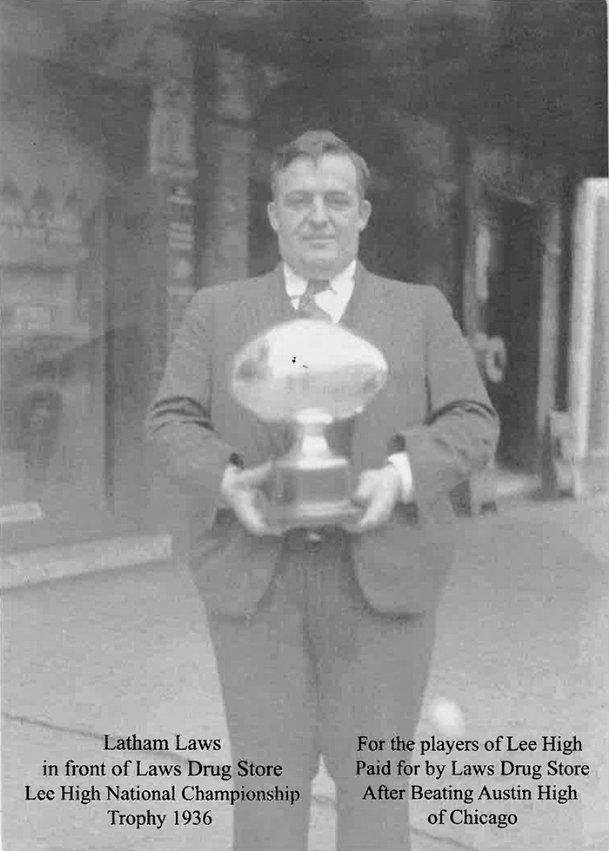 I want to mention how dominant Austin High was in the 30s. They often played teams from four states such as Decatur Georgia, Massillon Ohio, and Louisville Kentucky. In what was also billed as a

Austin High was described as the "biggest thing in town" at a time when the Chicago Bears were drawing only a few thousand fans. In 1937 Austin outscored opponents 364 to 19 including Leo 26-0 and Jackson (TN) 13-0. Yet a year earlier they were held to only 6 points by Columbus' Lee High. Austin High played rival Leo in the "Mayor's Charity Game" in front of an estimated 120,000 fans (according to the Chicago Tribune) at Soldiers Field in Chicago. The game is still the most attended high school game in history.

I have been unable to find stats for Austin High other than the above. Additional stats are not needed to understand that Austin High was exceptional at football. Austin High had 2,200 students while Lee was much smaller with maybe 200 or 300.

I ran across this family photo of my Daddy in front of Laws Drug Store. On the back of the photo he had written "paid for by Laws Drug Store" and "given to the players of Lee High." Dad was a volunteer coach at Lee High after playing college football at Davidson.

Later, in the 1950s, he took Lee High's real coach (Willie B. Saunders) to several football games. I would go with them, thus was able to hear a few things about the 1936 team.

Daddy told me that nine or 10 players from the 1936 team went on to play at Ole Miss, Alabama and State. The star of the team, Wesley Dodson, scored all our points in the 7 to 6 win against Austin. He then played at Ole Miss. Leslie was a single-wing tailback and played defense as well.

My Dad thought the Ole Miss coaches did not appreciate Wesley's skills and preferred other players. However, my Dad was probably biased. I think Wesley had a mediocre career at Ole Miss, but he was far from mediocre at Lee High.

Austin High is still a school. Lee High burned (possibly including the pictured trophy) and was replaced by a new building on Military Road and then a new school named Columbus High.

Dad was a star at Davidson as a center and offensive lineman. His junior year they won all games including North Carolina, North Carolina State, Duke, and Wake Forest. When Davidson beat North Carolina his brother, John Laws, a senior, sent their mother a telegram saying "Much celebrating at Davidson. Beat North Carolina. Players carried Latham off the field on their shoulders". Dad made Spaulding's list of outstanding lineman in the country. His senior year Davidson pulled off a big upset beating the Florida Gators at Gainesville 12-0. Davidson was merely a small Presbyterian college.

Daddy was crazy about football. Most every year he would buy season tickets for Ole Miss, State, Alabama and Georgia Tech. He would often see two games each Saturday. For example the first game I ever saw was Tulane versus Notre Dame at Tulane Stadium in 1949. Dad then saw a game at Baton Rouge that night- LSU and some team.

I remember Mother and I stayed at a hotel and he rejoined us after the game. One year Dad and I saw the Gator Bowl one day and the Orange Bowl the next day. We flew to Jacksonville and Miami in a small plane which he often rented. We also saw many Sugar and Cotton Bowls. Mother and Daddy saw Alabama play in the 1938 Rose Bowl and also saw Alabama play Fordham in New York City. Once at Georgia Tech we sat in the press box with Uncle Eddie Laws who was still connected after he had been captain of the football team when he played for Tech.

When I interned at Emory Dad gave me two season tickets to the Georgia Tech games. I never saw a game, however, when I was not on duty I would go to the campus and sell the tickets for cash. I enjoyed the money as at Grady Memorial Hospital I was paid only a hundred dollars or so a month.