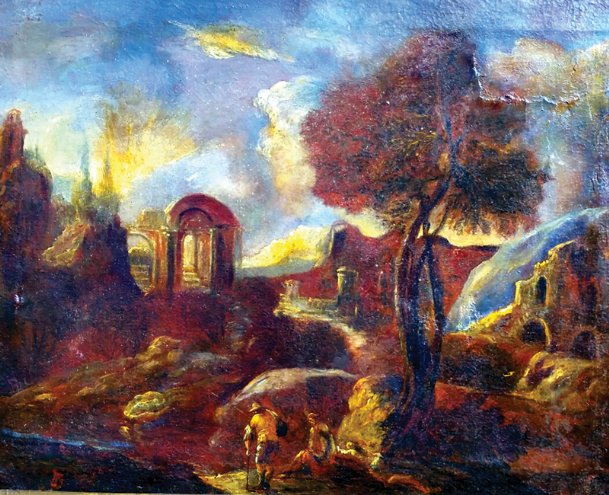 A c.1650 painting by Italian artist Salvator Rosa. During a 1640s insurrection in Naples, Rosa was associated with Lorenzo Tonti. As a result of that relationship Tonti was forced to flee with his son, Henri, to France. Henri grew up to be an early French explorer with LaSalle along the Mississippi and Tombigbee Rivers. Photo by: Courtesy image 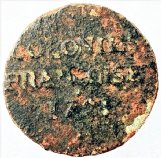 A 1721 French copper coin found on the beach at Dauphin Island, Alabama, after a storm. It is a 9 deniers coin minted for circulation in the French colonies of Canada and Louisiana. Barely readable is the legend on the reverse "COLONIES FRANCOISES."
Photo by: Courtesy photo

It is amazing how people, places and events are so interconnected.

Three weeks ago, I was explaining to a friend the artistic legacy of Salvator Rosa, a mid-1600s Italian artist and Renaissance man. I often talk about the history of the Tombigbee River Valley and now a hurricane has devastated Dauphin Island, Alabama. Interestingly, all of those people and events share a connection.

This story begins in Naples, Italy, around 1640. Salvator Rosa (1615-1673), according to the Uffizi Gallery of Florence, Italy, was "indisputably a leader in that tendency towards the romantic and picturesque, called a proto-romantic." In his art, Rosa painted unconventional landscapes in which he often depicted bandits in rocky scenes with storm-tossed trees. He also engraved romantic figures of soldiers and mythological scenes.

He was a poet, a satirist and is considered the inspiration of the 18th century picturesque movement in England. In 1973, an Italian stamp honored Rosa and in its February 2011 issue "Art and Antiques" magazine devoted its cover and a 10-page full color article to Rosa.

Rosa's life was as different as his art and therein is the tie to our own history. In addition to his unconventional art and literature, Rosa acquired a reputation for having a very rebellious nature. During the Spanish revolt of Masaniello (a late 1640s uprising of the people of Naples against the Spanish viceroy), Rosa was associated in the insurrection with Lorenzo Tonti. As a result of that uprising, Tonti, whose son Henri had recently been born, was forced to flee to France. Henri de Tonti, though born in Italy, was raised a Frenchman and devoted his life to the French exploration of North America, including the Tombigbee River Valley.

Henri de Tonti (1649-1704) was one of the most interesting characters to ever wander our region. He was known as the "Iron Hand" because of his replacement of a severed hand, lost during a Sicilian War battle, with a crude iron hand or hook over which he wore a glove. He became noted as a close associate of La Salle and accompanied La Salle on his 1682 voyage down the Mississippi River.

Tonti became engaged in the French fur trade and in 1700 moved to the new French settlement of Biloxi. Then in early 1702 he landed at Dauphine Island before moving up the Mobile/Tombigbee River to the new settlement of Mobile on 27 Mile Bluff.

Tonti was soon sent north from Mobile to establish peaceful relations with the Chickasaw Indians. He met with the Chickasaws in March 1702 at a village located northwest of present-day West Point. At the village, he described finding "an Englishman" wearing "a rather dirty blue shirt, no pants, stockings, or shoes, a scarlet wool blanket and some discs at his neck like a savage."

In 1704, in an attempt to bring permanence to the Mobile settlement, the French vessel Pelican sailed from France with wives for the men at the French colony. As one of the most eligible bachelors in Mobile, Tonti was allowed to make one of the first selections and quickly became engaged to one of the Pelican girls. Unfortunately, the Pelican also brought Yellow Fever which Tonti contracted and from which he died.

In 1699, the French had planted a settlement at Biloxi, but the following year the settlement at Biloxi was devastated by illness and a more suitable harbor was found on Massacre Island which received its name from the many Indian skeletons found there. In January 1702, the French began moving soldiers from the Bay of Biloxi, to Massacre Island which was renamed Dauphine Island. The French were soon constructing a warehouse there for the protection of the new colony of Louisiana's supplies. The Port of Dauphine became the principal port for the Colony of Louisiana.

Though the Louisiana Colony's first principal port, Dauphine Island soon encountered problems. On Sept. 9, 1710, English privateers from Jamaica attacked and sacked the settlement located there. Then in 1717, a hurricane washed sand into the ship channel, silting it up. The closing of the channel to larger vessels ended the port's importance, and by 1725, the port and its associated village were all but abandoned.

It was an association with the artist Salvator Rosa by Lorenzo Tonti in the 1740s that caused Tonti to flee to France with his infant son. The son grew up French and became an early settler of Dauphine Island and Mobile. The principal French port in the Louisiana Colony, Port Dauphine was then destroyed by a hurricane in 1717.

It all came in full circle to me about 30 years ago. I was in an antique shop in Point Clear, Alabama, and bought a 1721 copper coin with a legend on the reverse "COLONIES FRANCOISES."

The shop's owner said the coin had been found on the beach at Dauphin Island after a storm. It was a 9 deniers French coin minted for circulation in Canada and Louisiana.