Possumhaw: Nature all around us 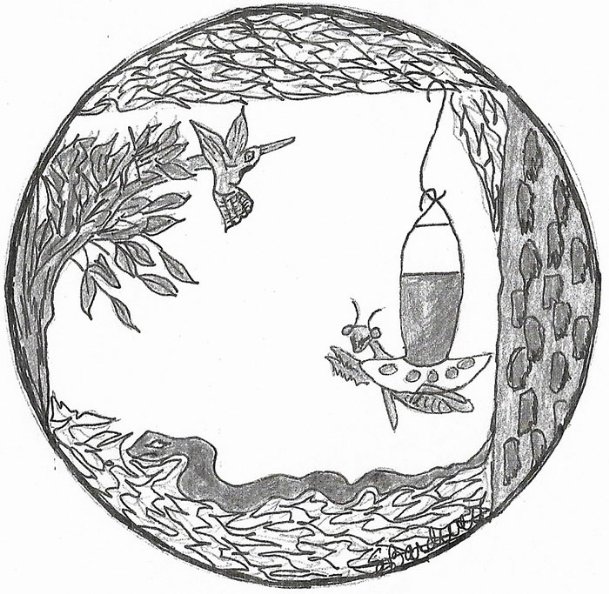 "Nature is the purest thing we can touch and observe. It can be the most beautiful and also the most devastating."

Outside the kitchen window the wild cherry trees grow with leaves of red, the harbingers of fall. Our trees are freckled with green and red in a variety of shades. When a ruby-throated hummingbird perches on a cherry tree limb it is perfectly camouflaged in the leaves. It takes an eagle eye, and maybe a bit of movement, to spot the tiny bird. Hummingbirds are still feeding at the feeders, flitting back and forth between trees and feeders. Last week I glanced toward the feeder, and there in the darkened shadows lurked a murderous praying mantis. The strange looking fellow had no intention of imbibing in the sugary liquid; his purpose was far more deadly.

I snatched my phone and was soon beside the creature as he rotated his head 180 degrees in my direction. The shape of a praying mantis's head is quite bizarre. It reminds me of those movie cameras of the '50s -- the kind with two huge floodlights at opposite ends of a bar. While he was looking directly at me, holding his front legs in the praying position, I snapped his photograph, then thumped him into the ivy below.

Be very careful when thumping a praying mantis; they have sharp thorns on the inside of their prayer hands they impale into their prey as quick as a blink. Exactly as they would do to the poor, unsuspecting hummingbird. The hummingbird is then snared in the praying mantis's thorns, never to escape. He was the first praying mantis I had seen on the feeder this year, and I pray not to see him again.

Later that Sunday afternoon, Sam and I took a hike at the nearby environmental center. Cool weather beckoned. Maybe we would see unusual plants, maybe woodland flowers. We read plaques for the historical information of the bluff and the Prairie. Sam peered over the rail at the lake and the river, looking for flow and color. We are always attracted to the "toothache" tree. The plaque read indigenous people discovered chewing the leaves or bark with the oddly shaped nodules would relieve toothaches. Today's herbalists use the bark to relieve headaches, heart and kidney ailments, liver disease and as antiseptic powder. We discovered one tree with obvious shavings where nodules had been removed.

Trails led up and down wooden steps, over small bridges and around bends in the trail where Sam warned, "Look out for snakes." No sooner than Sam had spoken, I noticed a perfectly still black snake by a tree, half hidden by leaves.

"There's a snake," I pointed. I held my finger in the air and traced the snake's body for Sam to see. Later when we returned the same way, we found the snake gone. The plaque had said the snake doesn't want to meet you any more than you want to meet the snake.