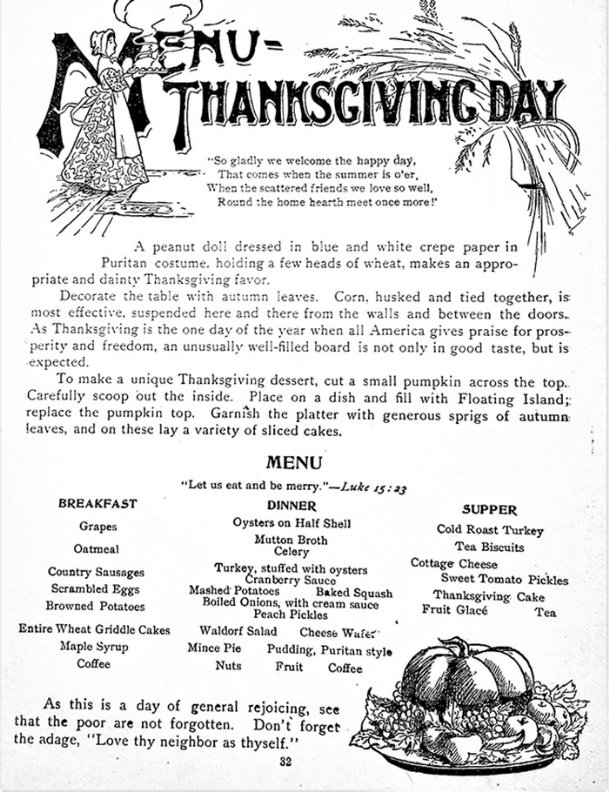 A Thanksgiving menu suggested in The New Dixie Receipt Book, a 1902 cookbook that belonged to Sallie Billups of Columbus. Photo by: Courtesy photo

Thanksgiving is a holiday filled with history, tradition and food.

The earliest local mention of Thanksgiving I have found is in the Nov. 30, 1838, Columbus Southern Argus which reported that the governors of Massachusetts and New Hampshire set aside Nov. 29 as a day to be observed as "a day of public Thanksgiving." Then on Jan. 12, 1839, The Columbus Democrat reported that Thanksgiving was celebrated at the "lunatic Asylum in Worcester, Mass, where the Thanksgiving feast consisted of turkey, pumpkin and mince pie followed by a dance."

The Spanish who founded St. Augustine, Florida, had their own feast of thanksgiving and invited friendly Indians in 1565. Historian Michael Gannon in his book "The Cross in the Sand" calls that celebration "the first community act of religion and thanksgiving in the first permanent (European) settlement in the land."

There are also two early celebrations of Thanksgiving in Virginia. At Jamestown, when a relief ship arrived in the spring of 1610 after the "starving time" of the previous winter, there was a celebration of thanksgiving for their deliverance. Even more significant as to the history of Thanksgiving was the settlement of the Berkely Company in 1619.

As big a role as food plays with Thanksgiving, references to special recipes for Thanksgiving foods did not become common in Southern cookbooks until around 1900. It is then that Thanksgiving menus start appearing and the day which had been considered a day of prayer begins to be referred to as a holiday. Interestingly, the celebratory meal was not just a luncheon but included breakfast and supper too.

Oysters and oyster dressing are a tradition at Thanksgiving meals in many Columbus homes. It is a tradition that began more than 185 years ago. It was fall before the water in the Tombigbee rose enough for regular steamboat traffic between Columbus and Mobile, and the weather was cool enough to bring up wet croaker sacks filled with fresh oysters. The celebration of Thanksgiving was at the same time as the first fresh oysters began arriving from the coast, and oysters thus became associated with Thanksgiving and Christmas in Columbus.

As to why the Plymouth Thanksgiving is celebrated and not the earlier ones, Gannnon wrote in an article in USA Today: "The English wrote the history and established the traditions. That's life, get over it." Why, then, was Plymouth, Massachusetts rather than Virginia given credit though it too was English?

Sarah Hale is the reason. She was born in New Hampshire and became a national figure as editor of Godey's Lady's Book, a popular national magazine. Thanksgiving during the early 1800s was a New England celebration and not much celebrated elsewhere in the country. Beginning in 1846, Hale began a national promotion of Thanksgiving and its New England roots. It was her efforts that popularized Thanksgiving across the country and set its origin in New England.

By the way, Hale also wrote a book of poetry, "Poems for our children," which contained her poem, "Mary Had a Little Lamb."

2. Voice of the people: Stan Boden LETTERS TO THE EDITOR ([email protected])

4. Voice of the people: Paul Mack LETTERS TO THE EDITOR ([email protected])