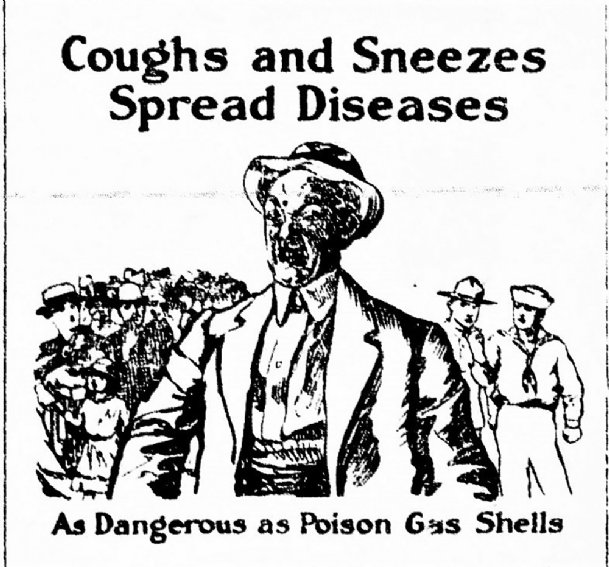 As World War I raged and the Influenza spread, the U.S. Public Health Service published this drawing which ran in the Oct. 18, 1918, Starkville News. Photo by: Courtesy image

Acting on the recommendation of the State Board of Health, the mayor of Columbus after a Friday meeting of the Columbus board of health has announced that "All schools, churches, theatres, pool rooms, motion picture shows and all public gatherings be closed and suspended until further notice."

While we are all worried about the current plague of COVID-19, this is not the first such outbreak to strike. It was in 1647 that the first deadly outbreak of influenza swept across the British American colonies. Often it would spread like wildfire, die down and then reappear. The epidemic of 1889-90 died down but then returned almost three years later. The outbreak of 1918 seemed to die down only to come back with a vengeance in January 1920.

The first wave of influenza swept through Mississippi in the fall of 1918 and peaked on Oct. 22. On that day 9,842 new cases were reported. After the 22nd the number of new cases started a slow decline, but still the influenza led to the deaths of 6,219 people in Mississippi that year. In contrast to COVID-19, the flu of 1918 struck those under 35 the hardest.

As the virus spread rapidly through Columbus in 1918, the campus of the Industrial Institute & College (MUW) was closed with all students quarantined on campus. The two hospitals in town reached capacity and it is recorded in the WPA History of Lowndes County that, "There was great suffering among the poorer classes of people in the factory district of Columbus. So many cases appeared among them that an improvised hospital was established in the basement of the S.D. Lee High School through the influence of Mrs. George Wilkerson, an outstanding nurse connected with the Red Cross." All of the beds in the two Columbus hospitals had been filled and the newly constructed high school was put to good use.

The Starkville Times on Oct. 11, 1918, reported on the dire conditions there and on the A&M College (MSU) campus:

"The Times is not an alarmist and would not knowingly exaggerated the serious situation that faces us today in the epidemic of Influenza that is now raging at the A&M College and in the city, nor will this paper suppress facts, for we believe the public is entitled to the facts. Up to the time of going to press, 30 deaths have occurred at the College (out of 1200 infected students) during the past week. ... Notwithstanding we are having one of the most serious and fatal epidemics ever known in the state, the people here show no signs of panic. They are going about their daily avocations and are obeying the laws of the health authorities. All public gatherings have been prohibited, and every order is being strictly adhered to."

Doctors, nurses and staff cared for the students at A&M along with an outpouring of help and support of the Ladies of Starkville. There was also help from out of town. Doctors from other communities not as badly affected came to Starkville to help. One large contingent of help arrived from a neighboring college.

The virus was contained, and its spread stopped at II&C. The doctors and nurses who had been helping there then with teachers and staff traveled to A&M. The Jackson Daily News, on Oct. 18, 1918, reported:

An article in the Oct. 26, 1919, Columbus Dispatch reviewed U.S. Public Health Service reports on the previous year's outbreak: "In the British cities the epidemic infested three distinct waves -- the first and slightest in point of mortality occurring in June and July, the second and most severe in November, the third in February and March. Data which need not be cited here in detail indicate that the course of the epidemic in western Europe generally was similar. ... In the United States the epidemic developed more largely in a single wave during September, October, and November. If, however, the epidemics already mentioned as occurring in the spring be considered the first phase and the explosive outbreak of the autumn the second, a third phase of recurrence is quite evident in many cases."

Another outbreak did occur in the U.S. in late December 1919 and early 1920. As a result, on Feb. 7, 1920, the mayor of Columbus reinstituted the ban on public gatherings that had been lifted previously. It was further suggested that people wear masks and drink a lot of milk, which is high in vitamin D. One report put the mortality rate for those infected at 5.5 percent.

Thanks to Carolyn Kaye for suggesting this column and transcribing many 1918 and 1919 newspaper articles.