Ask Rufus: 'No River for Steamboats' 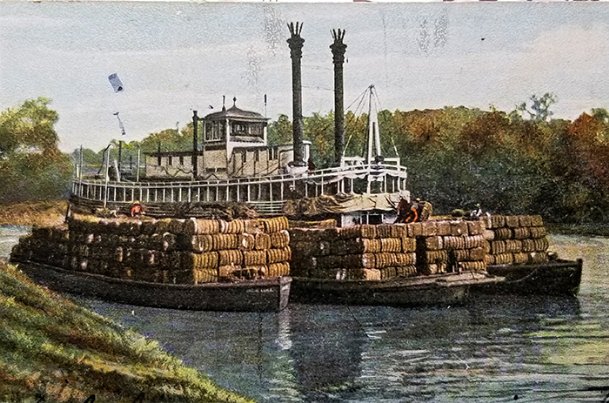 âScarcely in memory of the oldest citizen of the county has there occasioned such a spring â No river for Steamboats during winter or spring.â â John Billups, April 1855 Photo by: Courtesy photo

It began in the late fall of 1854 and extended through the summer of 1856. Before it was over several Tombigbee steamboats sank, and one caught fire and burned.

Hundreds of thousands of bales of cotton were stacked along the banks of the Tombigbee, unable to be shipped to Mobile, Alabama, where they could be sold. In Columbus, construction that had just started on St. Paul's Episcopal Church had to halt. The U.S. mail service to Montgomery, Alabama, stopped for a while, and a prominent Columbus resident committed a murder in Mobile. It all happened during the worst drought the South had experienced since 1809.

The 1855 Lowndes County plantation journal of John Billups provides a firsthand view of how bad the situation was:

"Scarcely in memory of the oldest citizen of the county has there occasioned such a spring - No river for Steamboats during winter or spring; the first steamboat of the season arrived at Columbus the 10th day April at which time I happened in Columbus and saw it -- This has not been the case since the year 1809, at least so say many of the oldest citizens of the county. Great difficulty in getting cotton -- none shipped until some time in April, then by Flat boats, almost entirely, only three steamboats having come up as high as Columbus, and they carried ... very light loads in consequence of low stage of water -- Did not succeed in getting off any of my own cotton until some time in June, then by Flat Boats to Demopolis, and then by Steam Boat to Mobile."

Billups' account of shipping problems is a story also told in newspapers from across the country. The Mobile News reported from Tuscaloosa on March 6, 1855, that Capt. George C-- had moved there in 1818, and never before had water navigation failed during a January and February. That it had simply rained in Columbus on April 6, 1855, and that the Tombigbee had a two-foot rise was newsworthy enough to make the New Orleans Times Picayune.

A New York merchant on a business trip to Columbus wrote that on April 12 two steamboats arrived in Columbus, but as the river was again falling, they left without a full load. He estimated that 300,000 bales of cotton were along the Tombigbee and Warrior rivers in need of transportation to Mobile. An article in the June 7, 1855, New York Mercury told how 140,000 bales of cotton were still stacked on the banks of the Tombigbee awaiting transportation.

It was a time of strangeness. In Columbus, the city needed a new well in late 1854 and well-borers were hired to bore it. When the first borer was unable to reach water, the city hired others. In the end three different well-borers were unable to reach water until 1857. For several weeks in 1855 steamboats were unable to ascend the Alabama River, cutting off most mail service to Montgomery. In November 1855, Thomas G. Banks of Columbus was having a drink in the bar of the Battle House Hotel. Banks saw William Trone, with whom he was slightly acquainted, and asked if he would have a drink. When Trone politely declined, Banks pulled out a pistol, shooting Trone and killing him. Then in 1856, a 5 1/2-foot long shark was caught in the Warrior River below Tuscaloosa near Eutaw, Alabama.

In 1854 construction started on St. Paul's Episcopal Church (It's still on College Street), but many of its members who were farmers were unable to pay their pledges in early 1855 and construction had to stop. They could not ship their cotton and corn to market in Mobile, bringing hard times and little money. Construction resumed, but at a slow pace, in 1856.

Aberdeen also felt the effects of the drought. The rule of thumb for steamboats was that six feet were needed on the Columbus river gage for a steamboat to make it there. However, 12 feet were required on the Columbus gage for a boat to make it to Aberdeen. In the spring of 1855, a newspaper article from Aberdeen circulated across the country. It reported that the drought was so bad a bushel in Aberdeen was only a peck, and that a 5-pound bucket of soap only weighed four pounds.

Transporting cotton to Mobile was the bread and butter of the Tombigbee steamboats. Even in the low water of 1855, the boats tried to navigate the river. In April 1855 the Eliza Battle was carrying goods from Mobile for Blair's Drug Store in Columbus. The Battle's pilot found the river too low and had to deposit her cargo at a warehouse at New Port Landing about 60 miles below Columbus. That night the warehouse caught fire and burned.

Then on Nov. 20, 1855, the Eliza Battle was carrying cotton from the upper Tombigbee to Mobile when she ran aground on Croom's Bar just below Black Bluff. In order to lighten her load a number of cotton bales were transferred to the steamer Jenny Belle. The Eliza Battle then continued on to Mobile. However, the Belle then ran aground. She then transferred the Eliza Battle's cotton to the steamer Sallie Spann. As the Sallie Spann proceeded to Mobile, she caught fire and burned.

The disastrous weather of 1855 continued into 1856. The July 30 Columbus Democrat reported, "there had been no rain to do any good for the last eight or nine weeks." The corn crop was "blasted" not only by the drought but also by armyworms and cutworms. The wheat crop "was mostly a failure." There was still hope, though, the cotton crop that had also suffered might with favorable weather be nearly average.

In the fall of 1856, the weather began to change. There was a frost on Sept. 23 and rains began to return. Then starting on Dec. 23, heavy, almost record, rains fell. It was said to be the most rain "since December 1847 -- the year of the great freshet." It was the 1847 flood that washed away the nearby river towns of Nashville, West Port and Colbert. The Columbus Democrat reported on Dec. 26 that the Tombigbee would be flooding within two or three days. However, it followed that warning by adding, "Of course, we shall soon have a plenty of boats up from Mobile." The great drought was over.

Thanks to Carolyn Kaye for helping with research and transcribing newspapers. Of course, all this just raises the question of who did John Billups know that had been in the Columbus area in 1809 and was living in Columbus in 1855.

1. Ask Rufus: The tragic past of Black Creek LOCAL COLUMNS