Kim Miller: The timeless wisdom of King's letter from a Birmingham Jail 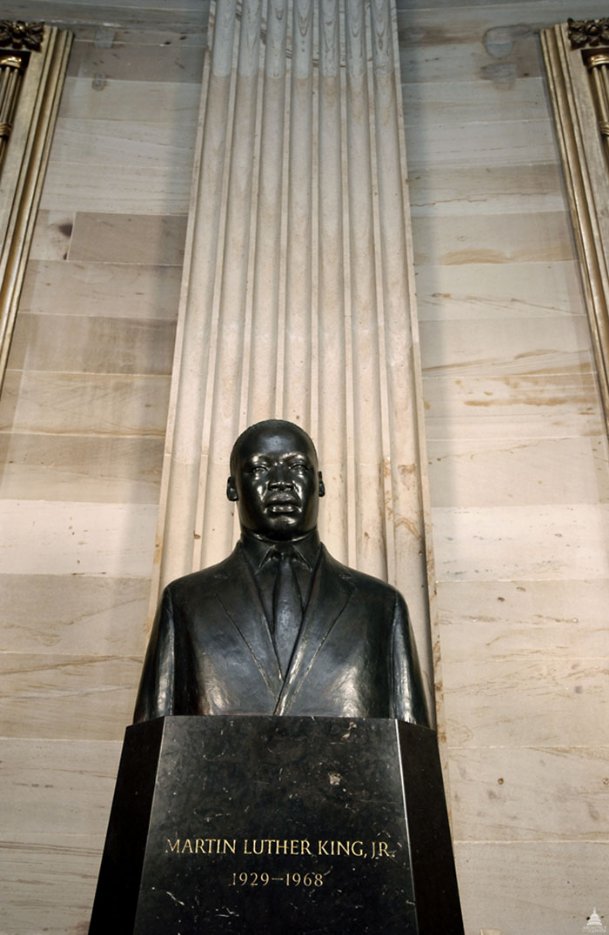 The bust of Dr. Martin Luther King, Jr. is pictured on display in the U.S. Capitol Rotunda. The bust was unveiled in 1986 on what would be Kingâs 57th birthday. Photo by: Courtesy Image/Architect of the Capitol

In April 1963 after five days of solitary confinement, Martin Luther King was shuffled to a regular jail cell and handed a Birmingham newspaper. Inside the pages, King found a "A Call to Unity" from eight white clergymen, urging King and his companions to cease their protests and be patient. They said King's efforts were "untimely and unwise."

King picked up a pen and wrote a response in the margins of the newspaper. Rather than enlarge the divide between them, he started, "I feel that you are men of genuine good will and that your criticisms are sincerely set forth."

Next, he looked for common ground to build on.

"I therefore concur with you in your call for negotiation. Too long has our beloved Southland been bogged down in a tragic effort to live in monologue rather than dialogue."

"In 2020 we learned we can get into a dangerous place when we paint each other with a broad brush and don't really listen to each other or really get to know each other," said Russell Mord, Associational Missions Director at the Golden Triangle Baptist Association. "My hope for 2021 is that we will find ways to listen to one another. Someone is not 'the bad guy' just because they are in the opposing camp."

Mord says we have not yet achieved the dialogue Dr. King talked about.

"Christians need to let our common faith be what pulls us together and binds us to one another. We've also got to be willing to die to self. Sometimes other people's perspectives are threatening to what we've always done or what we cherish. It's easy to be entrenched in a position when you don't know anyone with an opposing view."

Fostering relationships across the racial divide is the aim of Neddie Winters, President of Mission Mississippi.

"As people start talking to each other, they realize we are more alike than we are different. As we get to know each other, we change our stereotypical viewpoints. Many times, people find out they actually like each other," Winters said.

In his letter to the clergymen, King described how his tongue twisted and his speech stammered when he tried to explain to his six-year-old daughter why she couldn't go to a new amusement park near Atlanta. Winters said black parents are still having to talk to their children about topics white parents generally do not have to broach.

"When I was growing up, my daddy stressed to me how important it was for me to behave properly in public," Winters said. "My daddy told me that the police were out to get me so that they would have someone to work on their roads."

The Mississippi Plan, which allowed Black citizens to be arrested for things such as vagrancy and forced to involuntary labor, shaped his father's concerns.

Many Black parents still take great care in teaching their children how to interact with the police so that they do not get arrested or hurt.

"When the news came out about Ahmaud Arbery, that really got to me. I have nine grandsons who are in his age range," Winters said. "As our family talked about Arbery, my daughters and nieces became emotionally exhausted. So we started gathering on Zoom to pray for the men in our family every Tuesday night."

Over the last few months, their prayer list has grown to over 400 black men. "So now we meet on Zoom on Sunday nights so that I can find out who all these people are that we are praying for. My daughter in Houston has told me, 'You just don't know how much this prayer time has meant to me.' Other family members have said the same."

While sharing one another's burdens is integral to the Christian faith, members of American churches rarely cross racial lines to do so.

"We've been so suspicious of one another for so long. But we have to be honest about our suspicions and work to overcome them by being willing to not be offended," Mord said. "We need to get off our eggshells around one another and be honest. We've got to be able to ask hard questions. And we've got to be ready to hear the hard answers."

"We are most easily offended when we feel like our way of life or identity is threatened," Mord continued. "When we hold to our faith in God above all else, we can talk about the issues without being threatened."

The past year's divisiveness has left no stone unturned. Christians have gone toe-to-toe, including leaders within the Southern Baptist Convention.

"I'm just thankful they are willing to have the discussion and communicate about race issues. They are taking initiative to deal with the problems, and that's good," Winters said.

"Possibly the strongest indicator of change can be found in churches on Sunday morning as people bring their own biracial children and grandchildren to worship with them. And everyone is accepted and loved. This is happening more and more often," Mord said. "I think personal relationships--especially family ties to children--and the gospel are breaking down barriers."

As the calendar turned to 2021, Americans looked hopefully to a clean slate. However, recent events indicate the need for hard work in order to uproot divisiveness.

"We keep passing on a legacy of the ruins of racism because we aren't doing anything intentional about it," Winters said. "My hope for 2021 is that we will go deeper with God and deeper with each other. The closer we get to our Father, the closer we get to our siblings. We need to get to know each other by building relationships of trust, respect, and truthfulness. This takes intentional effort."

Kim Miller, of West Point, wrote this piece on behalf of Mission Mississippi, a non-profit which provides opportunities for individuals to connect across racial lines.

1. Ask Rufus: The tragic past of Black Creek LOCAL COLUMNS