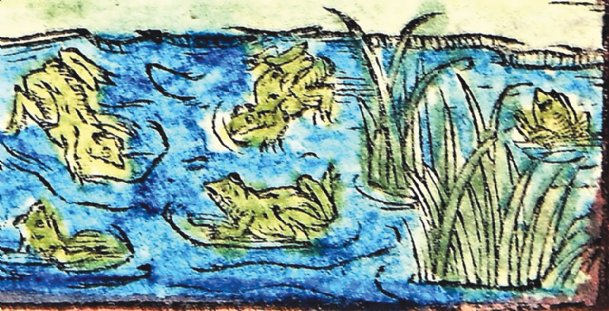 A mid-1600s woodcut of frogs in a pond is shown. In the late 1500s, English Queen Elizabeth I was being courted by a Frenchman, Francois, Duke of Anjou. The Duke's nickname was "the Frog" and a 1580 version of the children's song "Frog Went A-Courtin" may have been a parody of a frog courting a queen. Photo by: Courtesy image

I recently gave an 1882 book, "Minstrel Songs Old and New," to the Black Prairie Blues Museum in West Point. The book contains a fascinating collection of popular music from the mid-1800s. There I found songs such as "Tom-Big-Bee River or Gum Tree Canoe," which was first published in 1847, and "Root Hog or Die" first published in 1856. I was familiar with the "Gum Tree Canoe," which had been made popular by John Hartford in the 1980s folk music scene. I've heard the expression "Root Hog or Die" as long as I can remember but never knew it was a song.

Though it was first published in 1856, there are versions of the song going back, at least, to the early 1850s. The expression itself goes back to the earliest days of the United States when hogs might be turned out to forage in the woods on a farm. My favorite explanation of the phrase is by David Crockett.

Crockett actually wrote an autobiography and many shorter pieces often to promote his political career. In one of his publications, he said, "We know'd that nothing more could happen to us if we went than if we staid, for it looked like it was to be starvation any way; we therefore determined to go on the old saying, root, hog or die."

The song's first verse sounds as though Crockett himself could have written it:

worth twenty shillings right square in my shoes, it doesn't make a dif of bitterance to

neider you nor I, Big pig or little pig, Root hog or die."

Any mention of old songs can not help but bring to my mind "Frog Went A-Courtin." One of my earliest childhood memories is of Minerva Sykes, an elderly Black lady who was family cook, maid, babysitter and basically helped raise me, singing "Frog Went A-Courtin'" to me. I remember her sitting in an old Victorian chair singing the song while I sat on the floor mesmerized. I recall always asking what kind of sword and what kind of pistol did a frog have, and she would respond she couldn't say as it was just an old song she had known all her life.

When she would have first sung the song to me, it would have been at the old family home at 905 Main St. in Columbus where her mother had worked for my great-grandmother almost 100 years earlier. I can picture her mother singing "Frog Went A-Courting" to my grandfather when he was a child in the 1890s.

Numerous versions of the song, some with slightly different titles, show up in the song's almost 475-year history. Among those who have recorded it since it first appeared on a record in 1919 are artists ranging from Tex Ritter, Burl Ives and Elvis Presley to Bruce Springsteen, Bob Dylan and Paul McCartney. The version I remember Minerva singing to me began:

"Frog went a-courtin' and he did ride

sword and a pistol by his side

Rode on up to Miss Moussie's door

sword and a pistol by his side

knelt right down upon the floor

He took Miss Moussie on his knee

and said Miss Moussie will you marry me

The song itself has a fascinating history. Though "Frog Went a-Courtin" was a popular rhyme or children's song among African Americans in the South, its roots go back to Scotland. The first known reference to a version of the rhyme was "The frog came to the myl dur" and appeared in Scotland in 1548 in Wedderburn's Complaynt.

The most interesting tradition comes out of England where there is a reference to the rhyme "a Most Strange Wedding of the Frogge and the Mouse" in 1580, when it was recorded in the register of the London Company of Stationer.

In the late 1500s, English Queen Elizabeth I was being courted by a Frenchman, Francois, Duke of Anjou. The Duke was said to be widely unpopular in England. Queen Elizabeth often gave courtiers animal nicknames, and the Duke became "The Frog." It is not clear, though, whether he received the name from the queen or a satirical member of the public. Whichever it was, the name stuck. Thus, he was the "Frog" who "went a-courtin."

The song as a satire of the Duke fits time-wise with its 1580 registration. However, it had first appeared in Scotland some 10 years before Elizabeth became queen in 1558. It may well be that the 1548 version was slightly altered in 1580 to fit the times and become a parody Francois, "the Frog."

The first account of the rhyme being put to music was in 1611 in Thomas Ravenscroft's Melismata. The rhyme made its way to America in colonial times and has been popular with children ever since. It's amazing how when we look at the stories behind songs just how much history is often revealed.

1. Wyatt Emmerich: Hold on to your pocketbook! NATIONAL COLUMNS

4. Voice of the people: Paul Mack LETTERS TO THE EDITOR ([email protected])