Steve Mullen: Things to do in the summer doldrums

We're in the doldrums. The Independence Day weekend is behind us. Most of us, if we were even planning to take a vacation, have gone and come back.

Shannon Bardwell: "How does your garden grow ... "

The square foot garden is coming along fine. I ate the five strawberries, 15 beans and one squash produced thus far; Sam said he'd stick with Cheerios. Something got to the lettuce before I did, but if zinnias and leafy cosmos were edible the Bardwells would have a cornucopia accented with one humongous sunflower. 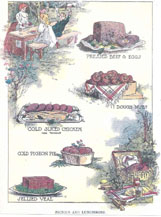 Ask Rufus: Food for the Fourth

Picnics and food have long been associated with the celebration of the Fourth of July. What food is popular, though, has changed with the times. A 1902 suggestion for foods to be served on a summer picnic included "cold pigeon pie" and "jellied veal."

We pulled in to the Kohl's store parking lot in Roswell, Ga., Saturday at 5:20 a.m. It was still dark.

Steve Mullen: At Ole Miss, lions and muppets and bears -- oh my.

The good news: Admiral Ackbar, the fish-faced "Star Wars" character who was a campus favorite for Ole Miss' new mascot, isn't on the ballot.

If anyone can restore harmony to The W's fragmented, disaffected and, in some cases, embattled community, it is this former student, faculty member and administrator.

Peter Imes: How the Internet has changed movie rentals

This Friday and Saturday, I will be attending a newspaper conference in Tunica. One item of discussion will be whether or not newspaper websites should install paywalls on their websites.

I don't have a crystal ball, but I know where I may very well die one day: In the intersection of College Street and Fifth Street South.

In the heat you can smell the honey and beeswax 10 feet from the hive. As our grandparents did in summers past, the bees escape the swelter by clustering outside on what is equivalent to their front porch. There and on the sides of the hive boxes they will remain making their low hum throughout the night. If the morning is cool, they will have retreated back inside by the time I return with my coffee.

As her friends and cousins are well into their summer break, it's a sad day, as Kyla declares, "June will be summer!" (I don't have the heart to remind her it's already June; she's one of only about 674 kids still in school full time around here.)

Garthia Elena Burnett: More than I bargained for

In the past several weeks, I have driven a police car with sirens blaring, was shot twice (with toy cap bullets), conquered a lifelong fear and shot a fully automatic assault rifle (with real bullets).

Shannon Bardwell: The evolution of men

There's something different about men now. I've been seeing them in grocery stores. In the Kroger parking lot a man pulled in beside me. He appeared to be alone, then I saw a car seat with a child. As I watched, he entered the grocery store, with child in tow.

Birney Imes: In search of a shade tree mechanic

The other day I got to wondering if there are any shade tree mechanics still around. You know, a fellow in an oil-stained T-shirt who works on neighbors' cars in a makeshift backyard shop or even in the shadows of a broad-limbed shade tree. He might have a jacked-up car or two in the yard and a motor hanging by a chain from a rusting swing set.

Peter Imes: Social media sites you may not have heard of

Everyone has at least heard of Facebook and Twitter. Both are Internet services that allow you to connect with existing friends or create new friends and to share information with those online friends.

Steve Mullen: A to-do list for the Not From Here

People who are new to this corner of the earth quickly realize there are two types of people: Those who are From Here and those who aren't.

Frequently, someone will show me an arrowhead they have found and ask if it is from the Choctaw or Chickasaw Indians. When I say neither and it's also not an arrowhead, I get real funny looks. To make matters worse, I usually add that the Indians around here did not live in tepees either.

Saturday Felder Rushing introduced the crowd at the Hitching Lot Farmers' Market to Don Featherstone. Gonzo gardener, radio personality and author, Rushing is something of a rock star on the gardening speaking circuit. And, on this morning he showed why, going full tilt for two hours in front of a standing-room-only audience, most of whom wore smiles the entire time.

Peter Imes: 3 things every business needs to do now

Here are three Internet-related things that every business needs to make sure they are doing right now.

Steve Mullen: The oil has shown up. Who else will?