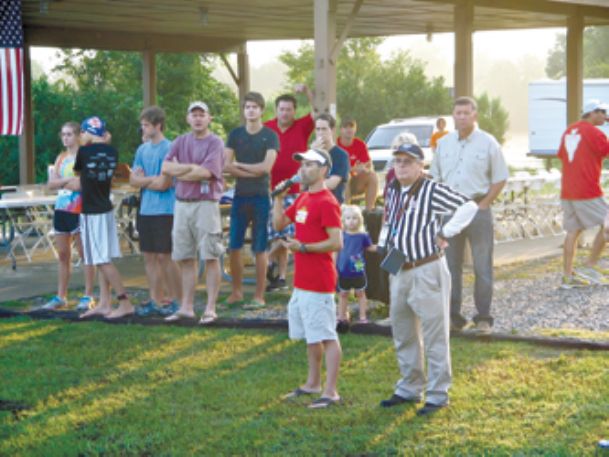 While some competitors eclipsed their time goals and others took pride in finishing, Brad Atkins surveyed the scene at the inaugural Possum Town Triathlon and smiled.

Up late Friday night without a lot to eat and checking on final details, Atkins took stock Saturday morning of the labor of love of that was winding down. With a few competitors remaining to complete the 5-kilometer running portion of the event, Atkins couldn't help think ahead to 2013 and ways to make the second edition of the "sprint" triathlon better.

"We were just extremely happy with how it went. It could not have gone better," Atkins said.

Atkins, his wife, Melissa, the Golden Triangle Running and Cycling Club spearheaded the effort to organize the triathlon in Columbus. The work of more than 50 volunteers and the support from the Columbus police and fire departments, Mayor Robert Smith, the Lowndes County police department, the Gold Wing Riders Association, and the sponsors of the event made it truly feel like a community undertaking.

"This was a really well-organized race," said Chad Welch, of Richmond, Va., who finished 14th overall in the men's division with a time of one hour, 24 minutes, 44 seconds. "This one really, really did impress me. The race directors did a great job. There are plenty of amenities and plenty of volunteers on the course. There is a pretty experienced field of people who are here, and it is a good venue."

The fact that families of many of the 117 participants were at the Columbus Lock and Dam on Wilkins-Wise to cheer on their mothers, fathers, sisters, brothers, and friends added to the healthy vibe.

The only hiccup came at the start of the race, as rain earlier in the morning forced a delay of 17 minutes. The rain and overcast conditions actually added to the race, making it a little cooler and less taxing on the participants. The sun finally broke through and stuck around after 9 a.m.

More than an hour later, Atkins and race organizers handed out awards and prizes to the participants. Well stocked with food, drink, places to sit and relax, and a masseuse, Atkins and race organizers looked like they had thought of everything. But Atkins referred to his mental checklist and said there were several things he wanted to tweak to make the event even more enjoyable.

"I have gotten a lot of positive feedback from the first race," Atkins said. "Hopefully they will come back and bring friends next time."

Atkins said the goal was to have around 100 for the first race. He said some who signed up didn't show up, likely because of the rain. He said the number of hotels close to the race site and the quality of the roads made it even easier for competitors to concentrate only on the race.

Looking ahead, Atkins said he will look at the course for the 600-yard swim and see if it could be changed to avoid some of the stumps in the water. Columbus' Ladd Chain was the first to complete the swimming portion in 7:29. He teamed with Dave Taylor and Amy Peal to take fifth in the relay.

"When I was coming back, I almost veered off into the stumps and I had to pull myself back," said Ladd Chain, who competed in his first open-water triathlon. "I could have done better. I kind of went fast, slow, fast slow. When I went around that corner (and the buoy), I could have went a little faster and brought it all the way back, but I haven't been practicing in a while.

Atkins said he also could tweak the organization of the transition area, where competitors changed into the cycling gear for the 17-mile ride and then returned to drop off the bike before the 5-K run.

"You can always make it better," Atkins said. "Every year we will get feedback from our competitors and try to make it better. The more people we get, the more we can offer.

"I really do feel good about. It was a lot to put together. (Friday) I didn't have time to breathe. ... I had my doubts. You want all your volunteers to show up, and they did. Every one of them showed up. I can't say enough abut the fire department and everybody else who helped, and the mayor for coming out and giving his speech and coming out and seeing what an impact this makes on the town, and the people we're bringing in to stay overnight and the economic impact is good. Columbus needs this. We need more events like this that get people outside, whether it is running, biking, or swimming. Whatever it is. Hopefully, we encouraged other people to try it next year."