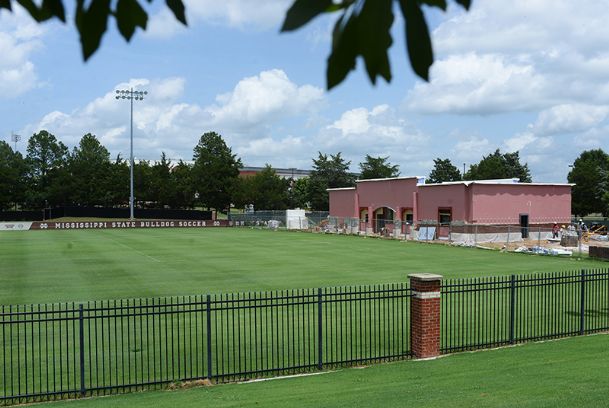 A look from the side of the new $1.8-million field house for the Mississippi State womenâs soccer team. The facility is on track to be completed by Sept. 1. Photo by: Mary Alice Truitt/Dispatch Staff

STARKVILLE -- Aaron Gordon already has started to take stock of his stuff.

From books, to furniture, to paperwork, to mementos, Gordon has accumulated plenty of things since he was hired as Mississippi State women's soccer coach on Nov. 27, 2012.

If the start of the 2016 season didn't provide enough reasons to be excited, Gordon is anxiously awaiting another announcement: the date he and his team will move into their new home.

On the heels of construction projects that have benefited MSU's basketball programs, its golf, track and field, and tennis teams, and its softball team, the women's soccer program is counting the days until it moves into its new $1.8-million field house on the site of the MSU Soccer Field.

"The immediate part of it is, 'Wow, we have a new home,' " Gordon said. "In the preseason, we don't get to practice out of there, so everything is the same as it is. But (once construction is completed) for the first time here our kids can go to the field and everything from their equipment to their video to their locker room to their showers will be there. They can go there, get dressed, get prepared, and walk out the door to the field. The goal is right there, 10 yards away. That is a luxury we have never had."

Gordon said the new facility, which is behind the goal closest to Mize Pavilion and Davis Wade Stadium, will lessen the burden his players and staff members feel to hurry from place to place, or from their current home in Humphrey Coliseum to the game field to practice, to do things. He also said the building is impacting future players because they can see a tangible example of MSU's commitment to the program.

Gordon said MSU is "pushing hard" to see if the players and staff members can make the move from Humphrey Coliseum to the new facility in time for the first regular-season home game Friday, Aug. 26.

"By this fall, when kids are on campus, they are going to go through there and say, 'Holy cow, there is a real commitment from our athletic department,' which is why I came here to begin with," Gordon said.

In 2012, former MSU women's soccer coach Neil Macdonald had an artist's rendering of upgrades to the MSU Soccer Field on the wall in his office in Humphrey Coliseum. When asked about the picture, Macdonald smiled and said something to the effect that he hoped the rendering would come true because it was something the program needed to compete. Macdonald was re-assigned within the athletic department after the 2012 season. He went 58-103-14 in nine years at MSU.

Neil McGuire, who led MSU before Macdonald, said in 2012 that MSU had plans drawn up that would have added to the amenities -- like a locker room on site -- to the MSU Soccer Field when he was working for then-MSU Athletic Director Larry Templeton. In fact, he said those plans were shared with recruits but never materialized.

MSU Director of Athletics Scott Stricklin said the project is set to be completed Sept. 1. It will include a 1,000-square-foot player locker room, shower, and bathroom, a 500-foot treatment area, a 600-foot film room/lounge, a 300-foot laundry/equipment room, a 300-foot coaches locker/conference room, and a 250-foot kitchen.

Stricklin said the project is on track to meet its completion date. He said MSU is fortunate to have set funds aside every year and to have a group like the Bulldog Club, a 501(c)(3) non-profit organization that was established in 1974 as a funding resource for student-athlete scholarships and a means to build and upgrade athletic facilities, to help make the new soccer facility happen.

"Logistically it is a huge need for that team," Stricklin said. "Currently, their locker room is on the Dudy Noble side of the (Humphrey) Coliseum, so that is a pretty good hike for those young ladies, so to give them a field house, a locker room, a training room right at the field, that is long overdue from that point. Our goal is to make them more efficient and to help them use their time in a better way."

Stricklin also said the new soccer facility sends a message that MSU is committed to its women's soccer program and shows the student-athletes, coaches, and fans that the athletic department wants to give them whatever tools they can to help them be as successful as possible.

"It is probably bittersweet because we wished we could have done it earlier, but for various reasons monetarily (we weren't able to)," Stricklin said. "We want to make sure we are putting something in place that is going to benefit the student-athletes and the coaches. We have seen it with softball (with the construction of a new facility), golf at Ole Waverly (with the construction of a new facility), and I think this is the next investment in our Olympic sports that we have not been able to do in the past."

Gordon said the building "bookends" the facility with the trees at the opposite end and the stands and press box to the left. The team benches are to the right. He doesn't know how much the facility will impact his recruiting because he isn't sure if a building is a deciding factor for a player. But Gordon believes the facility will bring a comfort level to recruits who visit MSU, and that that feeling will fit well with everything MSU has to offer.

"I always believed, even though we didn't have it and it was never promised to me, I really believed in a vision that Scott Stricklin had that when it was time and when they were able to do it, they would make it a priority, and they wouldn't just kick the can down the road year after year after year," Gordon said.