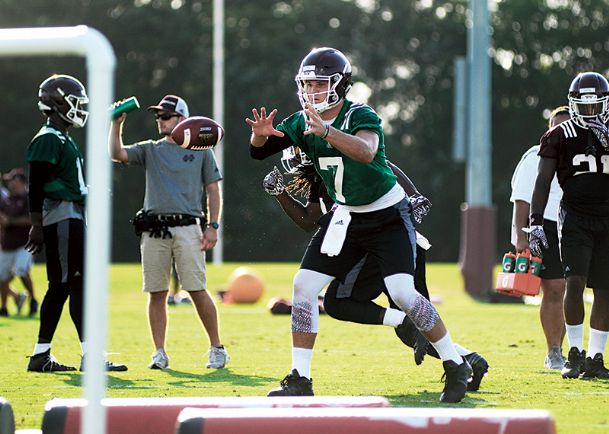 STARKVILLE -- Mississippi State football coach Dan Mullen has a specific mold in mind when he recruits a quarterback.

Running a spread offense, the quarterback has to be more than a thrower. They have to run the ball, too. Mullen had that with Alex Smith at Utah, Chris Leak and Tim Tebow at Florida, and Dak Prescott at MSU.

In two seasons as the starter, Prescott broke 38 school records and was compared to Heisman Trophy winner Tebow. This season, Mullen will try to find a replacement for Prescott. He has three players who have been with the program since the start of training camp and another -- Wyatt Roberts -- who joined the program Sunday as a walk-on.

"One of the things you look for is versatility, and all (three) of our quarterbacks give you that flexibility," Mullen said. "All four of them can throw and run. There isn't a guy that isn't a good runner, so we're not limiting you. None of the skill sets of any of the four quarterbacks is going to limit what we do. We have to figure out who the guy is and then we can build on it."

Mullen hasn't indicated if a quarterback has distinguished himself in the first two weeks of training camp. They have been splitting reps evenly.

"Watching film and learning from Damian, he's extremely smart, extremely technically sound," Fitzgerald said. "Nick's young, but he's just so smart, so talented. He picked it up so fast."

Staley echoed Fitzgerald's sentiments. Before he transferred, he praised Williams' grasp of the position and offense and Tiano's progression. Even for a big guy, Staley praised Fitzgerald's ability to run.

"I think that allowed him to become a better football player, especially mentally," MSU quarterbacks coach Brian Johnson said. "Normally when you redshirt as a true freshman, you don't know much anyway. To have some experience, to understand the game and to be able to sit back for a year and watch it after you know a little bit, I think it helps you to learn a little bit more and kind of understand from a more macro perspective."

Tiano is the least experienced, but he said he doesn't feel like the underdog and is fighting to win the job. He said he was nervous this time last season, but he has gained confidence and feels more comfortable.

"He's very bright, he's very intelligent, and he works extremely hard," Johnson said. "He's a really good football player. I'm excited to see how he continues to develop. He's really worked his tail off in the weight room and in the film room. He worked hard in his offseason study to put himself in the position he is now."

"Nick is an unbelievable athlete," Tiano said. "He's got a super strong arm. Damian is just so smart. He understands everything. It just clicks for him. He's really good mentally and fundamentally."

The quarterbacks aren't trying to be Prescott or to fill his shoes. They're trying to play within themselves and earn the job on their merits.

"There is no limitation, but we have to go off of what he does the best to be successful," Mullen said.