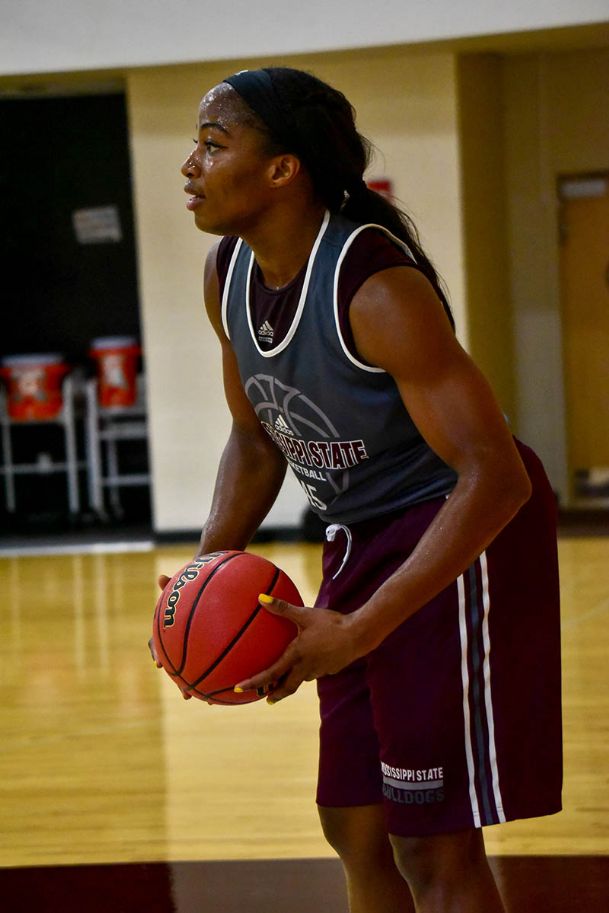 It was less than an hour into the Mississippi State women's basketball team's first practice of the 2016-17 and the 6-foot-5 senior center was moving well and keeping up with the Bulldogs' guards and forwards in a drill designed to have the players finish at the rim off fast breaks.

While there were the usual misses from players not timing their runs or their jumps correctly, Okorie looked like she was in midseason form, placing the ball off the backboard with just the right touch to score almost every time.

"I feel really confident because I have worked so much on it," Okorie said. "I have been able to gather myself and recognize who I am in the paint and go up and look for the backboard and use it to finish with a soft touch."

Okorie's ability to finish at a higher rate of efficiency will be a key for MSU this season as it attempts to build on a program-record 28-win campaign and the school's second trip to the Sweet 16 of the NCAA tournament. That success has earned the Bulldogs a host of preseason top-10 rankings, including a spot at No. 7 from Athlon and the Sporting News. Slam Magazine has MSU at No. 8, while Lindy's Sports has the Bulldogs at No. 12.

Last season, Okorie shot a team-high 52.6 percent from the field. However, she acknowledges that number could have been higher if she had converted more shots in and around the paint. But Okorie, who is from Lagos, Nigeria, by way of the Stoneleigh-Burnham School in Massachusetts, doesn't use her limited experience as an excuse. Instead, she uses it as motivation to keep getting better.

"It has been a really challenging process for me, but I didn't let that get to me in the sense that it set me back," Okorie said. "I was able to use that as a learning process, too, to be able to get the work done, to concentrate, and to know I still have room to grow and to keep working on it."

Okorie admits she has heard people ask her how she isn't able to make a higher percentage of shots since she is so tall and usually is close to the rim. In fact, she doesn't disagree, but she said making shots more consistently has been a physical and a mental process that has at times been frustrating and rewarding.

MSU coach Vic Schaefer has seen both sides of the coin. He said Okorie continues to mature and that he is confident she is going to have a strong season for the Bulldogs.

"I just think she's more poised, her skill set is more developed, her touch is better, and her conditioning is better," Schaefer said. "She looks really good to me."

Schaefer credits associate head coach Johnnie Harris for her work with the post players. He said Okorie's improvement is similar to many post players because they have to understand how to use their size and how to move their feet around the basket to put themselves in the best position to score.

While that might sound easy for a post player, especially someone who is as tall as Okorie, or MSU sophomore center Teaira McCowan, who is 6-7, it isn't. Schaefer said time and repetition are needed to polish moves and to develop chemistry with guards so they deliver passes that make it easier for them to score.

"With her, her best basketball is in front of her," Schaefer said. "She has a chance to really be special. She has a great frame, she is tough, she is strong. The conditioning piece right now and being able to go for long stretches is part of that process."

This season, Okorie hopes to improve on her averages of 6.8 points and 6.0 rebounds per game as a junior. Those numbers were up from her sophomore season, when she averaged 3.4 points and 3.7 rebounds a game.

Most impressively, Okorie improved her field goal shooting percentage from 42.6 percent as a sophomore. A similar jump this season could help the Bulldogs set another school record for victories and score more than 69.2 ppg.

"I am confident in myself because I know through the process of practicing and playing basketball at Mississippi State my experience and knowledge has increased," Okorie said. "That is part of what has given me the confidence in my game for 2016, plus hard work. I have put in so much hard work to get it right."

Okorie, who sat out her freshman season due to NCAA eligibility issues, said she hasn't set point or rebound goals for herself for this season. She only said "rebounds and stickbacks" are the areas she wants to improve on from last season. She knows her maturation as an offensive players likely will lead to more touches for her on the low block or in the paint. Schaefer said Okorie might be on the court more with McCowan this season.

That is an imposing thought for the Bulldogs. It also could lead to more assists for the MSU guards, who Okorie said have been working hard to deliver passes high to help the post players finish.

Okorie said she hasn't considered the possibility of having one more year of eligibility following this season. She also declined to think about moving on to play in the WNBA or professionally overseas.

Schaefer said he has talked to Okorie about possibly earning another year of eligibility, but he doesn't know if it will be possible. If he had his choice, though, Schaefer would love to have Okorie back because she works hard, sacrifices for the team, and is a wonderful teammate, just ask McCowan.

"Chinwe has come far from when we got here in the summertime," McCowan said. "She is catching balls really well and finishing really well time. She is taking her time. On defense, she is starting to get it down."

Said Schaefer, "How can you not respect that kid? She has not seen her mom in six years. I have a real respect for her and the way she handles herself. She is going to have a double major when she graduates. She takes great pride in her schoolwork, so what is not to love about that?"

Given how much she has improved, Okorie acknowledges the thought of playing professional basketball is "kind of playing around" in the back of her mind, but she doesn't want to lose focus on her studies. Okorie was a Southeastern Conference SEC First-Year Academic Honor Roll member in 2014 and a member of the SEC Academic Honor Roll in 2015, 2016.

Still, Okorie appears willing to consider that chance when it comes to her, at least until after this season or her career at MSU is finished.

Then, and only then, will Okorie re-dedicate herself to take her game up another level and polish that shooting touch so it shines.

"If God says this is where I want you to be, I am not going to challenge that call," Okorie said. "I can make my goals and set plans, but, at the end of the day, whatever God says that is what I feel like is going to happen.

"I feel no pressure, although it is challenging because this is my team and we have to get to our goals before I can think about that next level. That is what my plan is."