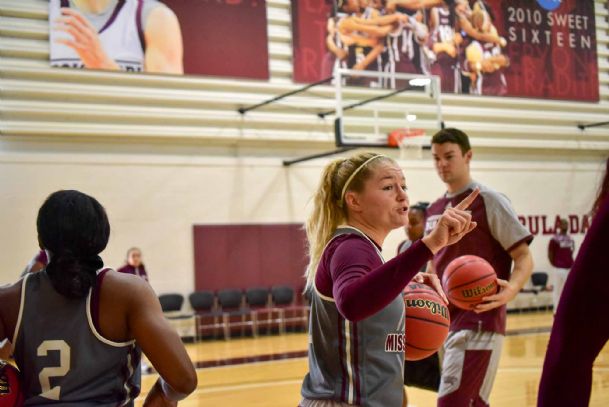 As the daughter of a basketball coach, Schaefer has had a close-up look at how her father, Vic, builds leadership skills in all of his players.

As a point guard, Blair Schaefer often has been the catalyst for her teammates, pushing them when they need a lift and setting the example for them by taking charges and playing with the determination and grit any coach would love.

This season, Blair Schaefer hopes to use those qualities to become an even bigger leader for a Mississippi State women's basketball team that is looking to build on its best season. Fresh off a program-record 28-win season and a second trip to the Sweet 16 of the NCAA tournament, MSU returns all five starters and 90 percent of its point production and 89 percent of its rebounding from last season.

To take the next step, Vic Schaefer has acknowledged leadership will be a key to helping the Bulldogs play to their potential every day in practice. Blair Schaefer, a 5-foot-7 junior guard, feels she is ready to take on the responsibility of being a bigger leader.

"I have really embraced a leadership role on this team, and I feel like people on my team are responding to me very well, so I really hope to stay in this leadership role to keep my team accountable and to keep peoples' heads up," Schaefer said. "I feel I am very vocal with my teammates and I am able to show my teammates a lot of positivity whenever people are doubting themselves or being negative or things just aren't going right. I am always there for them."

Schaefer said she continue to work on her shot so she is ready to come off the bench and provide a spark. Last season, Schaefer averaged 2.8 points in 9.6 minutes per game. She appeared in 33 of MSU's 36 games and shot 30.6 percent from the field. She shot 33.8 percent from 3-point range and was second on the team in 3-pointers made (24).

As one of four juniors on the team, Schaefer knows experience will be one of the Bulldogs' strengths. She hopes she can be a voice that helps hold her teammates accountable throughout a non-conference schedule that figures to be the toughest in coach Vic Schaefer's fifth season in Starkville.

To prepare the team for that marathon, coach Schaefer had his team go through a two-day exercise with The Program, an organization that works with professional and collegiate teams and assists them in the development of their leadership skills and chemistry. Schaefer said he and the rest of the MSU coaching staff served as observers as two marines led the MSU women's players through a variety of team-bonding activities designed to test their limits.

Schaefer said this was the first time he has been a part of the activity. He was so impressed with the results that he said his MSU teams will work with The Program from now on.

Schaefer felt all of his players benefited from the experience of working with The Program. He said Blair gained a sense of confidence from the consistent vocal leadership she conveyed during the two days.

"She was the most vocal and wasn't afraid to step out and lead a group and be accountable for a group and have the responsibility for being accountable to that group," Schaefer said. "There is pain in leadership. Leadership isn't about all peaches and cream. There are going to be tough days, hard days, and some days people don't want to be led."

Coach Schaefer touched on the importance of leadership earlier in the preseason when he said he was interested to see who on the team was going to emerge to lead the group. He said the work with The Program was designed to help bring out those skills in all of the players so the team realizes it has to get everybody pulling the rope as hard as possible at the same time. He said getting everyone to buy in and work their hardest at the same time is one of the most challenging parts of being a leader. That's why he hopes Blair and the rest of the players use the lessons they learned working with The Program to help the Bulldogs realize their potential and handle the weight of the preseason expectations and multiple top-15 rankings.

"I think they responded the best they could to a new and different environment where it is one thing to coach and teach the little things and demand it of them over the course of a season and another thing to have something new and different thrown at you and have to adapt to it in minutes, hours, or two days," Schaefer said.

Those are the adjustments Blair Schaefer likely will have to make coming off the bench for classmate Victoria Vivians, the team's leading scorer at 17.1 points per game. She hopes her consistent work ethic helps her give the Bulldogs whenever they need it.

"Being an upperclassmen, I feel this role is even more important than ever because I do have that experience and I know what it takes now, so I need to uphold those standards," Blair Schaefer said.

Following tonight's Maroon-White Scrimmage, the MSU women's team will join the MSU men's squad in Maroon Madness at 6:30 p.m. Friday at Humphrey Coliseum. The event is free to the public.

MSU will take on Villanova at 6:30 p.m. Friday, Nov. 11, in its season opener at the two-day Maine Tipoff Tournament in Orono, Maine.