It's all in attitude for West Point 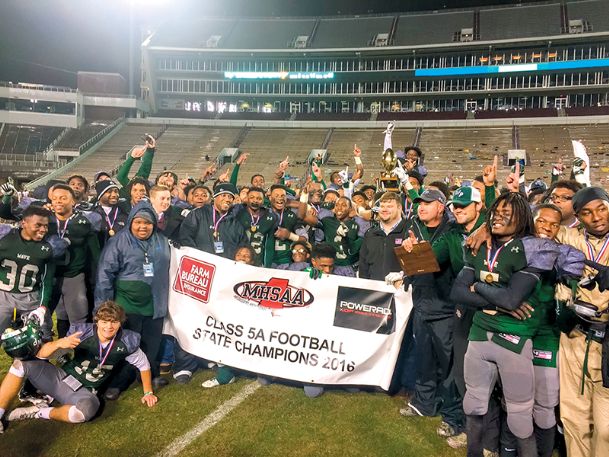 WEST POINT -- Continuity is the life blood of most championship programs.

While coaches are fond of talking about how great teams have great players, they often don't discuss the importance of having leaders who understand what it take to make a program special. It doesn't matter if you call it a mind-set or an identity. Championship programs need leaders who can establish a foundation, get their players to buy into that concept, and attack it every day with a relentlessness that dares someone -- anyone -- to stop them.

"He is a good fit here because of his mentality and the way he works," said Burton, who is in his second stint as assistant coach with the program after serving as a coach at Hollandale Simmons and Cleveland East Side. "He is blue collar. He is a hard worker. His teachings rub off on me. He is not only a mentor to me, but he also is one of my best friends in the world. We are not only co-workers, but we also are like brothers. Our families are friends. Everything about us is tight knit. Our whole coaching staff is tight knit."

For its accomplishment, the West Point High School football team is The Dispatch's Prep Player of the Week.

The title is Chambless' third in his 11 seasons as head coach. He also served for six seasons as an assistant coach at West Point High.

"I love being at a place where there is a lot of community pressure," Chambless said. "You go to the grocery store and they want to talk about football."

Chambless said the football program's winning mentality is built on a work ethic that starts in the weight room. He said the Green Wave don't shy away from working hard year round to get bigger, stronger, and faster. He said that way of thinking allows West Point to win many of the battles at the line of scrimmage and to wear opponents down in the second half. A new 16,000- to 17,000 square foot field house, which includes weight rooms for the varsity and junior high teams, will aid the Green Wave's conditioning and quest for additional championships.

Chambless leads a staff filled with coaches who know all about the West Point way. Co-offensive coordinators Casey Welch and Brett Morgan have been at the school since 2006 and 2009, respectively. Wide receivers coach Jerry Freemin (2008), defensive coordinator Matt Snow (2012), linebackers coach Ricky Melton (1999), defensive backs coach Charles Herron (2011), and defensive line coaches Burton and Seth Stillman (2014) are the most experienced members of the staff. Running backs coach Alex Williams, who joined the staff in 2015, is the newest member of the coaching staff. Those men have helped make sure the Green Wave never feel what they do on offense or defense gets old.

"It is the same style every time," Burton said. "It is family. The kids take pride in it for the town. The whole town is football centered. It is a part of life. It is just the way it is."

Marcus Murphy, a Mississippi State commitment, helped ensure West Point's style would pay championship dividends. The junior quarterback/running back led West Point with 31 carries for 141 yards and three touchdowns against Laurel. The defense did its part, too, limiting Laurel (13-2) to 98 yards to end the program's title drought.

Murphy said Chambless is such a good coach because he is "really hard on us about doing everything right and focusing the little things." He said the lessons don't get old because the players have confidence Chambless is telling them the right things to do.

"Coach Chambless is a man to look up to," Cunningham said. "He has been doing this before I even thought about playing football. He has had history coming into (championship) games and being successful. I am just happy to be on board with him."

Cunningham said he loves Chambless like he was his father, and that he is a great man and he has a great personality. That demeanor is ideal for a team that loves smash-mouth football. Chambless often gets so into games he doesn't recognize a coach standing next to him talking to him. But Chambless will come alive when he sees a play that excites him and epitomizes everything the program stands for, like when he started to cheer for junior wide receiver Jason Brownlee after he made a block on a running play in front of the team's sideline in a playoff victory against Lake Cormorant.

Cunningham said those emotions are to be expected from a coach he said is often as intense as the players.

Burton said things wouldn't work as well at West Point if Chambless didn't have a blue-collar mind-set. He said all of the football players in the high school program believe in that way of playing the game, as do the players in the park. He said those players aren't throwing the football around, a la a spread attack. He said they most likely are lined up in an I-formation and running the football. That is the way West Point teams of old played under coaching greats like Bubba Davis. That is the how Chambless learned to play the game under Dennis Allen. That is the way the Green Wave will continue to play for as long as Chambless leads the way.

"Coach Allen was one of the most driven guys I have ever worked for and worked with," Chambless said. "I remember the first summer we were here from 7 o'clock in the morning to 9 o'clock at night, every day. I loved every minute of it. I was a young guy and ready to soak it all up. He was so driven to the point where the details meant a lot. That instilled a lot in me, those little, bitty details it takes. He taught me the details of the game that needed to be covered here and the little things you need to do to win and to be successful. It took us three years to start driving that point home with the kids. Ever since that 2002 bunch came around, we were able to do something with them, and after that it has been a snowball effect every year with the kids."