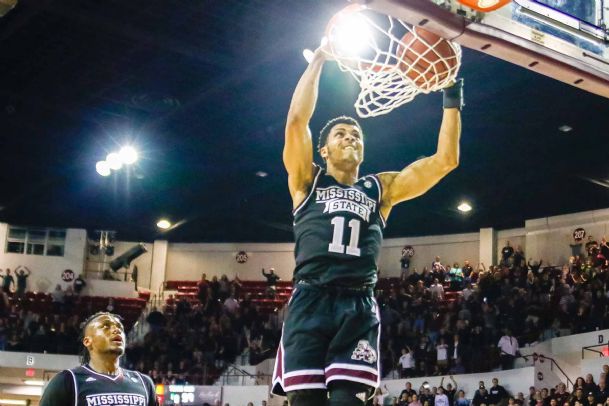 He quickly shifted toward one of his players that he felt played the best game of their young career. That player was freshman center Schnider Herard.

Herard scored a career-high 16 points and avoided fouling out in the second half as he led MSU to a 67-59 victory over defending co-Southeastern Conference champions Texas A&M on Saturday afternoon inside Humphrey Coliseum.

"He was a force inside (Saturday). He did a great job getting to the line and going aggressively to the basket," Howland said.

Although Herard had a big day offensively, he found himself in foul trouble after picking up two quick fouls to begin the second half. He picked up his fourth foul with 13 minutes, 54 seconds left.

Herard, who played 24 minutes, hovered over Texas A&M's 6-foot-10 Tyler Davis in the paint as MSU led 63-59 with less than 30 seconds remaining. Davis couldn't get the layup to go down. I.J. Ready came down with the rebound and tossed ahead to Quinndary Weatherspoon who dunked on the other end to seal the victory.

"I was just trying to stay in the game," Herard said. "I know I had four fouls, but I just couldn't make it easy for him. I just walled up on him and put my hands up to make sure I didn't get a cheap foul."

Herard has started the last four games after Howland made the decision to change things up to give his team more size at the beginning so they could have a better chance of rebounding. Herard has 17 rebounds in those four starts, including four against the Aggies. However, the Aggies out-rebounded the Bulldogs 38-23 and scored 40 points in the paint to MSU's 22. The Bulldogs were 24 of 30 from the free throw line.

Herard scored 10 points in the first half, including eight-straight to close the half and give the Bulldogs a 25-24 lead. He made four free throws and then had a layup.

After freshman point guard Lamar Peters launched a 3-pointer from the top of the key as time was winding down, he reached over Texas A&M's D.J. Hogg and tipped the miss back in before the buzzer sounded.

"He just buried us in the paint," Kennedy said. "He made his free throws and I think that's the biggest key because I know he struggles from the line. Two of our starters were on the bench in the last two minutes of the game and it made it tough on us.

"He's a Texas kid. We've known him and he's played with some of our guys before. He's a hard worker and a good kid and I know he was excited to play."

Herard scored eight points twice (Dec. 4 against Georgia State and Jan. 7 against LSU) for his previous career-high. Herard said he has been focusing on his job and playing for his teammates more than playing for himself or trying to get recognition.

Ready said they have tried to get the 6-foot-10, 250-pound Herard more involved in the offense.

"Schnider's playing great. I think the game is slowing down for him and of course we're feeding him," Ready said.

MSU plays host to No. 6 Kentucky 6 p.m. Tuesday (ESPN). Herard feels like he is ready for the challenge of the Wildcats. So does Howland.

"This was a big step for him playing against really good players," Howland said.