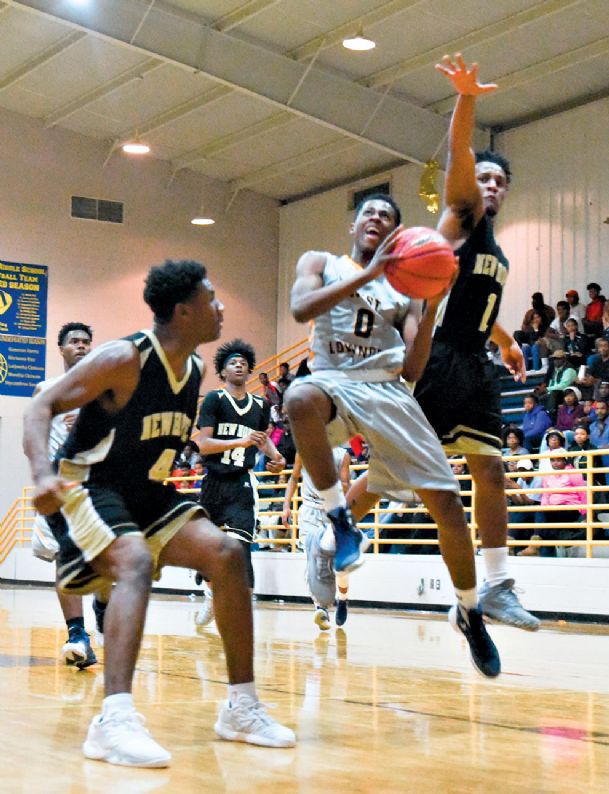 After building a 14-point lead in the first quarter, McBrayer saw his team slack off in the second quarter, which allowed West Lowndes High to cut the lead to eight at halftime.

Although he spent very little time with his team during the break, his message was clear. The Trojans responded to McBrayer's message and beat the Panthers 89-76 Tuesday night on the road.

"I told them we had to play better defense," McBrayer said. "We thought we would be able to score and we did, but we had to do a better job on the defensive end of the floor. We gave them too many easy looks in the first half."

The Trojans (16-7) played better defensively in the third quarter and allowed 14 points. But the Panthers (10-10) came roaring back with 24 points in the fourth quarter to make things interesting down the stretch.

McBrayer felt his players got complacent in the second and fourth quarters.

New Hope senior guard Terryonte Thomas, who helped his team to a 46-38 halftime lead, said offense wasn't a problem in the first half. But he agreed with McBrayer that the defense wasn't as good as it could have been.

The offense never slacked off for the Trojans. They scored 30 points in the third quarter to take a 76-52 lead into the fourth quarter.

The Trojans used a 17-7 run down the stretch to increase their lead. Bell, who transferred to New Hope from West Lowndes before the season started, scored the first six points in the run. Tyler Stevenson then had a layup.

Thomas scored the next six points with two jump shots and a layup. Anthony Roland made a layup and then Thomas made a 3-pointer to cap the run.

Thomas (game-high 23 points) said he felt like he got into a rhythm in the second half.

"I knew at the beginning of the third quarter they were going to try to contain me," Thomas said. "Eventually they were going break down, back off and play lazy. They were never in attack mode after that."

McBrayer was happy Thomas got his teammates involved in the offense in the first half by distributing the ball.

Trailing 44-29 late in the first half, the Panthers went on an 11-2 run. Darius Harkins and Devon Chandler had two baskets apiece during the run. Harkins capped the run with a two-handed dunk.

"Second half, I knew (McBrayer) was going to make some adjustments," Dale said. "They came with their A game and we came with our B-plus game."

Bell scored 20 points in his old gym, but he sat out all of the fourth quarter after falling hard to the floor to end the third quarter. Stevenson scored 17 points, while Andrew Junkin had 13 points before fouling out. Roland had 12 points.

Junior guard C.J. Smith (team-high 21 points) kept the Panthers in the game in the second half. Chandler had 16 points, Tyrese Wells added 13 and Nick Foster had 10.

Although the loss wasn't the outcome Dale wanted, he likes when his team, which plays in Mississippi High School Activities Association (MHSAA) Class 1A, plays bigger teams like New Hope, a Class 5A squad.

"We're just trying to stay relevant in 1A, so for us to only lose to them by 13 and weather the storm like that and for our team to be resilient, that was big," Dale said. "You get down by 20 a couple of times, it's easy to lay down. But for our guys to keep fighting from quarter to quarter, I can respect that."

"I tried to get everybody some playing time," New Hope coach Chad Brown said. "We have a big district game with Saltillo Friday night, so I didn't want to get anybody hurt. We played well in the first half. It's one we wanted to play well and put it away early, and I think we did that."

Jada Jamison led the Lady Trojans with 12 points. Marvaysha Seals had 12 for the Lady Panthers, while Edmariah Sherrod had 11.

West Lowndes will play host to Class 1A, Region 6 foe Sebastopol on Friday.