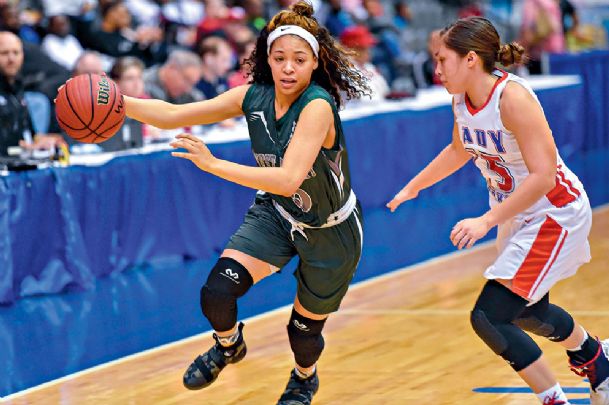 Never one to sit down, Daniel coaches every possession whether his team is up 10 or down 10. The passion is obvious, as is the burning passion to compete.

On this night, it wasn't meant to be for the Lady Wave.

Playing in its first state championship game, West Point hung tough until the final minutes of a 56-45 loss to Neshoba Central at Mississippi Coliseum.

"We rode this ride for as long as we could," Daniel said. "I couldn't be more proud of a team. I can't think of anyone in November who thought we would get to this point. It was an incredible group of girls and an incredible experience. We learned so much along the way. You can't be sad about tonight. You have to be happy about the experience."

Neither team was on the short list of favorites for the Class 5A State championship. However, both were there playing the rubber game of a three-game season series. There were few secrets after two competitive regular-season meetings.

"There are lot of tears today," said Tia McCrary, West Point's only senior starter. "But there aren't tears of sadness. There are tears of joy. We made it here to the Big House. That hadn't happened since 2002. We had a lot of fun together, throughout the whole season. In the wins and losses, we had fun. It was a special season. The whole community got excited when we started winning games. They wanted to see how far we could make it.

"Even though it didn't work out, sometimes you lose games. Sometimes, you play well and lose games. I am sad it is over because I loved playing with these girls. I will be their biggest fan next year. They are fixing to do special things."

West Point (21-6) had thrived on forcing turnovers and getting easy baskets in transition. Its size and depth frustrated many opponents.

But Neshoba Central (19-10) committed only nine turnovers compared to 18 for West Point. Other than a flurry of three-straight baskets midway through the second quarter, West Point never could get a patented run started on defense.

"The 18 turnovers (by West Point) were not a big deal because we turned the ball over all year, " Daniel said. "We always tried to speed the other team up. When you do that, you sometimes speed yourself up too much. We just couldn't get the transition going. We couldn't get Neshoba Central rattled. Part of that was because we had played twice, so they knew what we were going to try to do.

"So many different players stepped up throughout the game."

In typical West Point fashion, the game featured a new hero. Junior Aamiya Rush had 20 points and 11 rebounds. Rush filled a void early the game when the Lady Wave were trying to find an offensive rhythm.

"We really competed," Rush said. "It takes a little while for it to sink in that you are playing for the state championship. I just tried to make plays to help my team out. This is the most unselfish team I have played with. It doesn't matter who scored the points. The important thing was defense. If we played really great defense, we always had a chance to win."

On this night, the defense was great but not championship-caliber. West Point only held two leads -- 4-2 early in the first quarter and 37-35 after a putback by Heard in the final minute of the third quarter.

The teams were tied at 37 entering the fourth quarter. Neshoba Central then grabbed a 44-39 lead on back-to-back baskets by Andria Carter and Relissa Ray. West Point turned the ball over on two of the next three possessions and had a couple of runners in the lane rim in and come out.

"(In the fourth quarter) we were a little shell-shocked," Daniel said. "That is the first time that has happened this year. That makes sense with the magnitude of the game and everything riding on it. Playing (a quarterfinal round and semifinal round) game here is not playing the championship game. I think we got a little discouraged. It was so hard to fight back all night."

Rush scored seven-straight points to help her team battle back from a 24-14 deficit. Heard scored as the half expired to bring the Lady Wave within 28-26. Neshoba Central didn't take the lead until the final minute of the third quarter.

After re-taking the lead, Neshoba Central hit 12 of 14 free throws to seal the win.

Heard had 13 points and six rebounds for the Lady Wave.

Ray had 18 points for Neshoba Central, while Taylor Ben added 16 points. Ray was a 3 of 5 from 3-point range.

"We gave it all we had, but it didn't fall our way," West Point sophomore Jamia Hollings said. "We got a taste now, so we will be ready to come back. The hard work begins now. This year, a lot of people took us lightly. Next year, people will know the type of team we have. This really hurts, but we need to learn for it. We need to get another chance."