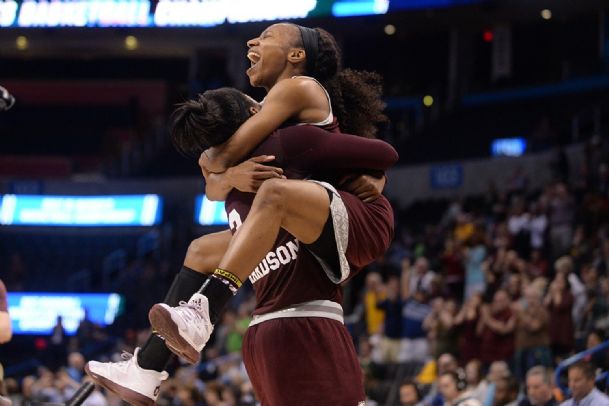 Vic Schaefer and Mississippi State know the feelings all too well.

Last season, UConn defeated MSU 98-38 in the Sweet 16 at the Bridgeport Regional in Bridgeport, Connecticut. The margin of victory as the largest in a NCAA regional semifinal.

"Oregon is led by three freshmen, three really good freshmen, and I think it was their first time playing against Connecticut," Dillingham said. "Connecticut can have that effect on you. They play really fast and they can make you turn the ball over. I think that attributed to their success last night."

Dillingham and Richardson hope an added year of experience will help MSU (33-4) when it faces UConn (36-0) at 9 p.m. Friday (ESPN2) in the Final Four at American Airlines Center in Dallas. South Carolina and Stanford will meet in the first semifinal at 6:30 p.m. (ESPN2). The winners will meet at 5 p.m. Sunday (ESPN) for the national title.

Richardson said the Bulldogs, who are making their first appearance in the Final Four, have grown and matured and know how to handle situations better than they did last season. She feels MSU will know what to expect in its second chance to play UConn, but it also knows it has to bring a different mind-set to the game.

"We couldn't forget about it," Richardson said. "Even if you kind of did forget, that was your motivation. Often if you did forget coach (Schaefer) would always bring it up."

Schaefer said he planned to show his team "bits and pieces" of the film from the 2016 game. As Schaefer is fond of saying, "the film doesn't lie," and he hopes to put the clips to use in a good way so the players will be in the right frame of mind. Victories against Troy, DePaul, Washington, and Baylor have given MSU a heightened sense of confidence. The Bulldogs have made the program's deepest postseason run despite being picked against by experts in two or three of their last games.

Schaefer referenced that lack of respect earlier in the postseason, and it could fuel the team's focus against UConn.

Depth could be an advantage for MSU. The Bulldogs have 10 players who average double-figure minutes, while the Huskies will go six or seven deep. But UConn's rotation features sophomores Katie Lou Samuelson and Napheesa Collier, who The Associated Press named Monday first-team All-Americans, and junior guard Gabby Williams, who was named a second-team All-American. Those three have joined senior guard Saniya Chong and junior guard Kia Nurse to help UConn's winning streak grow to 111 in a row. Two more wins would give the Huskies their record 12th national title.

"The guys that beat them by 60 not playing in this game," Auriemma said, referring to Breanna Stewart, Moriah Jefferson, and Morgan Tuck. "Those three scored a lot of points and did a lot of things. They're not here. If I am not mistaken, Mississippi State has almost its entire team back, and they're better. We haven't gotten to where we are pretending anybody is not as good or is not good enough to beat us. If we're not going to take Oregon lightly certainly we're not going to take Mississippi State lightly."

Schaefer said he feels great about his team entering the tournament. An ability to score above its season average three times -- 110, 92, and 94 -- will do that for a coach who said he talked with Auriemma after the NCAA tournament last season and in Colorado Springs, Colorado. He said the conversations were an exchange of ideas between peers that happen often. Auriemma said he, too, enjoyed the meetings and takes none of the credit for MSU's development.

As Schaefer said prior to the tournament, success in March and April typically depends on which teams get hot, and he said his team is hot. He said again he was tremendously proud of his team for its tenacity against top-seeded Baylor on Sunday night and knows MSU will have to use the same intangibles against UConn.

"I think that is the uniqueness of Connecticut (in) that they have those kids who are so multi-dimensional," Schaefer said. "I think that is going to be a key matchup. We're going to have to figure out a way to deal with that."

Schaefer said UConn, which leads the nation with 852 assists (MSU has 555), is more similar to DePaul than Washington, which was led by All-America senior guard Kelsey Plum. He said he isn't sure if the ball pressure the Bulldogs used so effectively against the Bears would work against the Huskies, or if that was something the Huskies might want them to try in an attempt to exploit it.

Schaefer also knows UConn is the No. 1 shooting team in the nation (52.9 percent), so there are multiple ways it will try to find an advantage. It all adds up to a few more sleepless nights for Schaefer, who admitted to being motivated by the fear of failure.

"I think when you start talking about how many assists Connecticut has, that's how good they all are as ballhandlers," Schaefer said. "That's what makes them so unique and difficult to defend is that they run a unique offense. DePaul is similar in what they try to run, so it puts the ball in everybody's hands on any possession, and anybody can make that pass to any cutter. You have to give those kids credit that they're able to touch the ball and it doesn't have to stay in a point guard's hands. Anyone can handle the ball, make a decision with the ball, whether it is to shoot, pass, or drive it and create something for someone else. That is what makes them so great. They're just a really well-rounded (team), and all of those kids are highly skilled, but he puts them in those unique and in multiple positions on the floor, and that is why it is just really difficult to prepare for them."