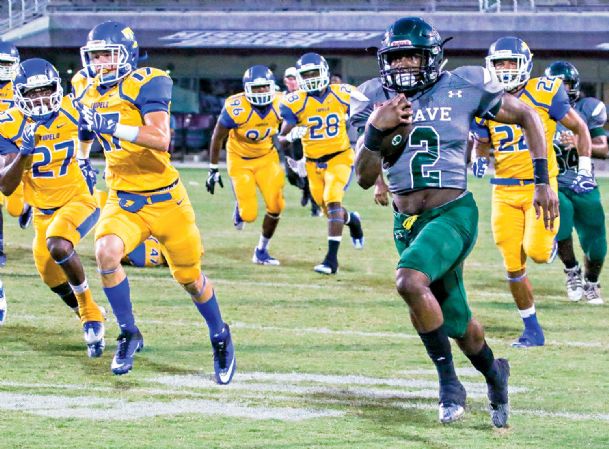 West Point High School senior quarterback Marcus Murphy scored on an 80-yard touchdown on the first play of his teamâs scrimmage against Tupelo on Saturday night at the New Hope Jamboree at Mississippi Stateâs Davis Wade Stadium. Photo by: Chris McDill/Special to The Dispatch

While it does little good to overanalyze last weekend's play at the New Hope Jamboree, the good news is the prep football season is here.

That's why we shouldn't spend too much time worrying about what happened at Davis Wade Stadium. However, while we wait on games that count, it doesn't hurt to list what stood out.

West Point: The read-option play may be the best one in the state.

When coach Chris Chambless mentioned Marcus Murphy would return to quarterback this season, it raised a few eyebrows. Murphy was there as a sophomore, but he played little behind center last season. Now, the Mississippi State commitment is back at quarterback and we can tell the game plan.

Chambless and crew plan to run the read option a lot -- maybe like 500 times. Murphy made Tupelo look sick with his quick dash moves at the line of scrimmage.

Will he keep the football? Will he give it to a back? Will he dink and dunk to a receiver in the flats?

Let's assume Murphy most likely won't complete more than three passes greater than 20 yards this season, but he won't have to. The threat he poses when the ball is snapped is scary.

Murphy ran for 167 yards in a 13-0 victory against Tupelo. Full disclosure here, Tupelo treated this like an NFL preseason game and only played starters two possessions.

That being said, no one in gold wanted anything to do with No. 2 in green by the time the night was over.

Let's remember Chris Calvert is an excellent back. West Point has a ridiculous amount of talent on offense. Chambless also has the state's best defense.

There wasn't much to read into Saturday night that we didn't know. When West Point scripts plays, it won't take much paper to write the read option over and over.

The win included some great plays and some blown assignments on defense. With a coach who is a perfectionist, it was a prepare-for-the-worst moment after the game.

Instead, Shorter raved about the performance of junior quarterback Maliek Stallings and the offensive line. Both areas looked good.

But after the game Shorter told his players they would have to play much better not to be embarrassed by Starkville on Friday in the season opener. He is right about that, too.

At the same time, Shorter was happy and that tells you what Noxubee County looked like in its first live play of the year.

The biggest takeaway was Starkville's lack of size on the offensive and defensive lines. Man for man, Louisville was bigger.

However, Chris Jones' first Starkville team makes up for its lack of size with speed and athleticism.

Malik Brown is back at quarterback after not finishing last season with the squad. Cameron Gardner leads a group of receivers where the knock of being young is overrated. Rodrigues Clark and Andreus Swanigan will lead the running backs.

On defense, it will be game, set, match on most nights.

New Hope: Class 4A will be good for the Trojans.

New Hope did the right thing by scheduling someone its equal in the jamboree. New Hope beat Amory 14-7. Both teams will be in MHSAA Class 4A this season -- Amory in Region 2 and New Hope in Region 4.

The Trojans played well defensively and like a team trying to get its sea legs on offense. Rain and injuries have kept the offensive unit from jelling.

New Hope won't face a Class 5A or Class 6A opponent this season. That is smart scheduling by coach Kris Pickle. The Trojans need time to work the kinks out.

Kyree Fields throws a beautiful ball. The Trojans also showed Jeremy Tate, a senior wide receiver who has committed to Memphis, likely will be in on about one-third of the throws.

New Hope has a chance to be good. The team will have time to put things together before Louisville and Noxubee County come along to decide the Region 4 race.

We are all aware of how young Columbus will be. It won't be beaten to death. However, coach Randal Montgomery's fourth Columbus squad might be the youngest in Class 6A.

On Friday afternoon, Columbus lost to Shannon 35-13. Shannon has a chance at the Class 4A title. Columbus will have to fight with everything it has to make the Class 6A playoffs for a third-straight season.

The good news is Columbus will look a lot different in November, so the Falcons can take solace that good days are ahead.