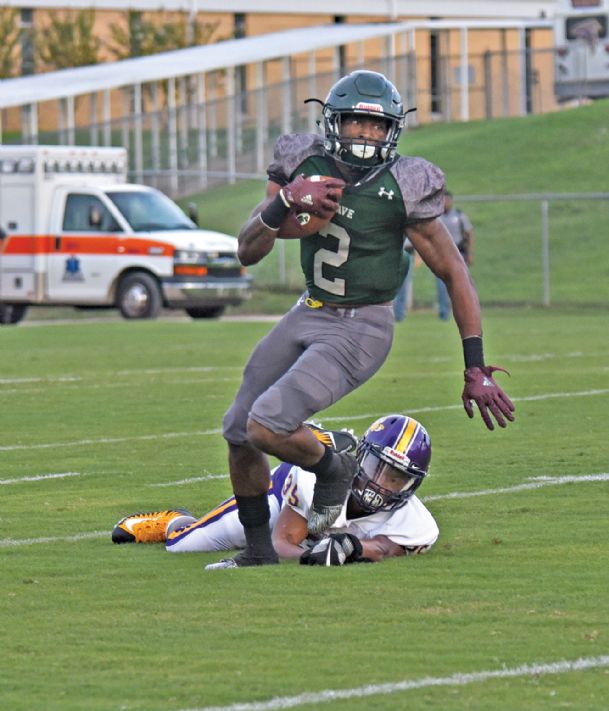 Undervalued as one of the state's best running backs, Calvert missed more than half of last season recovering from concussion-like symptoms.

On Thursday night at Hamblin Stadium, Calvert showed he plans to cherish each opportunity in 2017.

Calvert ran for 128 yards and three touchdowns to lead West Point to a 42-14 victory against Columbus in the Mississippi High School Activities Association (MHSAA) season opener for both teams.

"It's a blessing to play this game," the 5-foot-9, 183-pound Calvert said. "It hurts when you can't play. My boys had my back last year and kept winning. This year I want to be one of the reasons why we keep winning."

The reigning Class 5A state champions won their 14th-straight game. Many of the wins have come in dominating fashion. The Green Wave scored on six of seven first-half possessions and led 42-0 at halftime.

"We were beaten by the No. 1 team in the state," Columbus coach Randal Montgomery said. "That No. 1 team played well. They just have more athletes than we do. They had us at most positions. We are going to get there, though. We will soon be where we want to be."

Columbus, which had a starting lineup filled with sophomores, gained 80 yards on 38 plays. Still, penalties were few (five), turnovers were manageable (two) and the passing percentage was above 50 percent (8 of 14).

"We played hard for four quarters, and that is what I wanted to see," Montgomery said. "We made a lot of young mistakes. We can't hide that we are young. That is the makeup of this team. Will we watch the film and be better next week? Yes, that is a guarantee."

Opponents watching the West Point film will get chills.

While Calvert was impressive with two long runs where he turned on a dime and darted the other way for the end zone, Marcus Murphy also showed he is ready to terrorize opponents again.

Murphy ran 12 times for 85 yards and a score, and threw a 51-yard touchdown pass to Semaj Harris.

It was the easiest throw of the night, as the inexperienced Columbus front seven fell for Murphy faking a quarterback dive play. The Mississippi State commitment took two steps back and lightly tossed the ball over the line of scrimmage to Harris, who made it the rest of the way uncontested.

Nate Montgomery added a 9-yard touchdown run in the final minute of the first half.

West Point played reserves in the second half and finished with 380 yards of total offense.

"We played well," West Point coach Chris Chambless said. "You are concerned about the first game. There are some things to clean up. You always have that from the first game. Overall, very pleased with the effort. Started strong and then got a lot of new faces into the game."

Columbus scored on short fields set up by a bad snap on fourth down and on a short punt. Derrick Jordan scored on a 1-yard out and quarterback Laterius Stowers kept on a 9-yard run.

The Falcons made the most of a second half in which the clock ran through touchdowns, extra points, first downs, and incomplete passes. There was only one heat timeout.

"The only way we can get better is by playing," Montgomery said. "I thought we learned a lot tonight against an elite team. They have seniors everywhere. It was the position we were in last year. I think we come back to practice Monday with a great attitude. A long way to go but we will get there."

Murphy enjoyed his return to quarterback. Jake Chambless and Gray Berry also took snaps. Overall, Columbus did an admirable job against the read option play that destroyed Tupelo in the New Hope Jamboree.

"Always good to start off with a win," Murphy said. "We have practiced so hard the last couple of weeks. It was a relief to come out and play the game. It was fun. We have a lot of weapons. It's just a matter of staying within ourselves."

After scoring only five touchdowns last season, Calvert was elated to have three before most schools snap the football this season. In the 2016 Class 5A playoffs, Calvert ran for three scores in a victory against Oxford.

On Thursday night, he had that feeling of elation again.

"We are hungry," Calvert said. "The first championship really opened up our minds to what we can accomplish. We just have to stay focused and humble. We can't worry about rankings or going undefeated. Our goal is to play to our potential each game. We did that tonight."