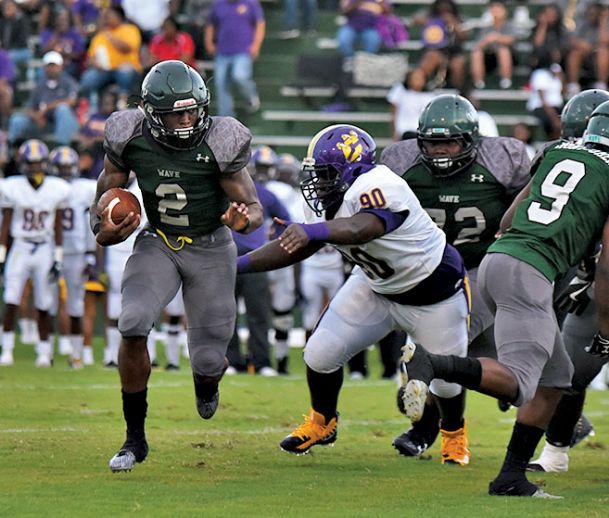 WEST POINT -- Jake Chambless has a new sense of appreciation of how much the little things matter of Marcus Murphy.

Executing those "details" -- like breaking the huddle the right way and with the right tempo -- are even more important to Chambless now that he has replaced Clayton Knight in the quarterback rotation at West Point High School.

Seeing how seriously Murphy takes the finer points has helped him understand how hard he needs to work to provide a complement to the Mississippi State commit in the team's offense.

"(Murphy) is a leader," said Chambless, who ran the scout team offense and saw some action late in games. "Every day in practice he tells me about the little things. He helps me make sure everybody claps and breaks the huddle at the same time. He also gets on me in the weight room to make sure everybody does all of their reps and does the right weights, or he will get on me if I get lazy in a three-step drop."

Murphy and Chambless will lead reigning Class 5A State champion West Point on the road for its game at 7 tonight against Louisville.

Chambless said he has learned a lot from Murphy that will help him get better this season and set the stage for next year. He said the building started in the summer, when Murphy didn't see as much time at quarterback in seven-on-seven camps. Even then, Chambless said Murphy chided him not to lock on to a receiver with his eyes so defensive backs can tell where he is going to throw the football.

"The offense is working fine," Chambless said. "In the Columbus game, I got in a lot, but why stop what we're doing with him and Chris Calvert when we are dominating running the ball. I would rather win and not play at all rather than me play and we lose."

West Point football coach Chris Chambless, who is Jake's father, credits Murphy for being an exceptional person and leader with an "aura" that draws people in and enables them to grasp concepts quicker. He said Jake has "soaked everything up" from Murphy and offensive coaches Brett Morgan and Casey Welch and continues to mature under center.

Coach Chambless said Morgan and Welch have done a great job with an offense that is focused on the running ability of Murphy and senior running back Chris Calvert. With game-changers like those two, Jake Chambless has the confidence to know he doesn't have to break a big play or try to do too much when he is in the game. He said that has relieved some of the pressure and allowed him to build better relationships with his offensive linemen.

"Being able to get Marcus off the field some and also somewhere else on the field beside quarterback helps us out a lot," coach Chambless said. "They have done a great job game-planning and putting together really the same offense for two quarterbacks, for two different types of quarterbacks.

"We really didn't have to change anything from what we were doing (last season). We are just able to run the plays that fit whoever is saying, 'Hut.' "

"Jake has progressed every week. I am seeing a lot of good things from him."

Murphy said Chambless' willingness to work and emergence as a bigger vocal leader have been his biggest areas of improvement.

Coach Chambless said the relationship of Murphy and Jake Chambless is just one example of how the 2017 Green Wave have come together. He said the players have the mentality that they aren't "owed anything," which he feels bodes well for another journey he hopes ends with another state title.

To do that, Murphy and Jake Chambless will have to continue to work well together. Judging from the way Chambless has picked up on Murphy's attention to detail, the offense appears to be in good hands.

"Last year, I didn't get to play much," Chambless said. "This year, before the game I am not nervous at all. I am ready to play and throw. I feel like I am a lot better and have more confidence and am faster."