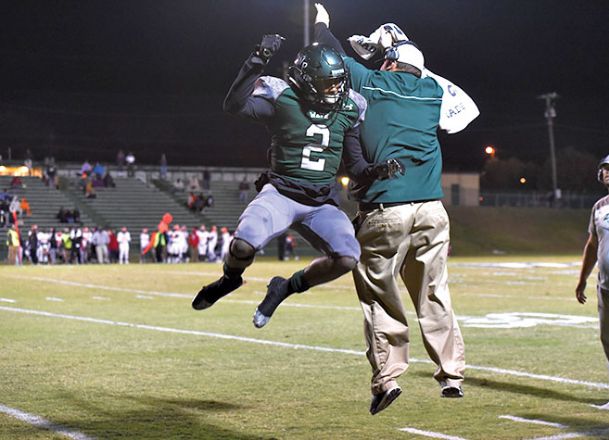 WEST POINT -- Chris Chambless has had a relatively uneventful season.

Through 12 games, the West Point High School football coach hasn't had to throw any water coolers or try to put his hand through a wall at halftime in an effort to fire up his players.

That doesn't mean the Green Wave haven't talked about motivation.

This season, though, the work of 27 has set the tone in an unblemished campaign. In fact, West Point (12-0) has had only two games -- Starkville and Louisville -- in which it hasn't played with a running clock during the game.

West Point, the state's No. 1 team in The Associated Press rankings, hopes that trend will continue at 7 p.m. Friday when it goes on the road to face Grenada (7-6) in the second round of the Mississippi High School Activities Association Class 5A playoffs.

West Point beat Grenada 48-0 in a Class 5A, Region 1 game on Oct. 20. Since then, Grenada, which finished third behind West Point and Olive Branch in the region, has won three games in a row, including a 33-9 victory against Germantown last week in the first round of the playoffs. That victory was a part of Region 1's sweep of four games from Region 2.

Those results, which included No. 4 seed Lake Cormorant's 16-7 victory against No. 1 seed and previously undefeated Cleveland Central, go to prove Chambless' assertion that anything can happen in the postseason. He said the West Point coaches haven't had to preach about focus and concentration because this year's team is focused on winning another Class 5A State title.

"You can be done pretty quick if you don't focus and take care of business," Chambless said. "We beat them one time, but we have had lessons in the past that we bring up time to time about having to play people twice and what happens the second time."

Chambless said he has mentioned the 2012 season as a perfect example. In the third game of the season, West Point beat Starkville 47-22. Starkville won the rematch 29-28 in overtime in the Class 5A North State title game in Starkville.

"They were a two-point conversion better than us. You can play 10 times and win nine out of 10, but that one game can send you home. Our guys are focused on being better than that and trying to make a statement every game."

Chambless said the expectation to win starts in practice. He said the Green Wave film every practice and go back and evaluate those performances and use them to show players when they are giving their best efforts. Like Mississippi State women's basketball coach Vic Schaefer is fond of saying, "the tape doesn't lie," so the Green Wave are held accountable by the coaches and their teammates to go hard all of the time.

Chambless said expectations like that make it hard for anybody to slack off at any point during the week. As a result, West Point typically has fired on all cylinders every Friday night.

The numbers back up that claim. West Point has outscored opponents 574-69 and has four shutouts. Marcus Murphy (1,353 yards rushing) and Chris Calvert (1,157) are part of an offense that has rushed for 4,025 yards and 64 touchdowns.

Chambless said the players don't want to "get punked" in practice, which is why the Green Wave are able to play hard, fast, and with a lot of emotion every week. He said the desire of every player to "make a statement" fuels practice and preparation.

"We motivate every day the best we can," Chambless said. "The difference between this year's team and past team is this year's team is highly self-motivated, so I haven't had to throw any coolers or punch any holes in walls this year. I haven't had to do those things yet. Not saying I won't, but, at the same time, we don't have to wake them up. They are awake at kickoff at 7 o'clock every Friday night."

Chambless is confident West Point will be ready Friday night regardless of the outcome in the first meeting against Grenada. He said the Green Wave haven't had back-to-back bad days in practice. Chambless said that is a credit to the players' ability to take constructive criticism every day in practice. He feels the result has been a team that continues to get better.

"You have to learn how to fail before you can be successful," Chambless said. "I think we are showing them on film how they can fail but they can do better for it. That has kind of helped us out.

"You have a good, core group of seniors that has been together for a long time and has won a lot of football games together. They want to end their senior season the right way before they move on to other places. They have all bonded together. It is fun coaching a bunch like that."