Vivians continues to raise her level of play 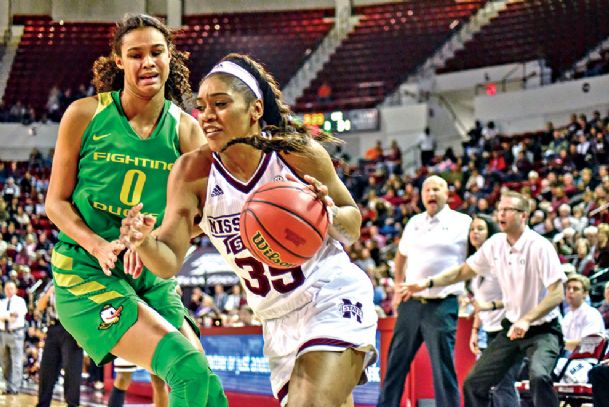 Victoria Vivians drives past Oregonâs Satou Sabally en route to two of her 30 points Wednesday in the No. 5 Mississippi State womenâs basketball teamâs 90-79 victory against No. 9 Oregon at Humphrey Coliseum. Teaira McCowan paced the Bulldogs (10-0) with a career-high 35 points. It marked the first time since MSU has had two players score 30 or more points in the same game since Charetta Robinson (33 points) and Natasha Johnson (30) did it in a 108-85 victory against TCU on Dec. 31, 1992. Photo by: Luisa Porter/Dispatch Staff

STARKVILLE -- Oregon women's basketball coach Kelly Graves sees something in Mississippi State he hopes his players can develop this season.

"They're playing with a little more swagger," Graves said. "I think last year they didn't know how good they could be. Right now, they know."

If one MSU player epitomizes that confidence, it is senior Victoria Vivians. The Scott Central High School standout has been the face of the program ever since she arrived in Starkville. The 6-foot-1 guard has led the Bulldogs in scoring in each of her first three seasons. She has done it by shooting less than 40 percent from the field in each season.

This season, though, Vivians is showing different dimensions to her game. The result is a more confident and focused player who is proving to be a bigger handful for defenders.

Vivians showed a national SEC Network audience how much her game has grown Wednesday as she scored 26 of her 30 points in the second half to lead No. 5 MSU to a 90-79 victory against No. 9 Oregon before a crowd of 5,445 at Humphrey Coliseum.

"Vivians is so much better this year," Graves said. "She is playing with a lot more confidence than she did (last year). She is much more of a playmaker."

Vivians was 10-for-15 from the field, including 5-for-8 from 3-point range, to help MSU improve to 10-0. She entered the game shooting a career-best 53 percent from the field. Her effort against Oregon marked the eighth game this season she has shot 50 percent or better from the field.

Vivians showed that patience multiple times in the second half. Earlier in her career, she had a tendency to take shots when she was open. Coaches often call that "settling" for shots. Now, though, Vivians is more apt to attack the basket and create contact. She did that against the Ducks (8-2) by going 5-for-6 from the free-throw line. She also had four rebounds, two assists, and two steals in 33 minutes.

The best example came in the third quarter when she was open with the ball on the right wing. MSU coach Vic Schaefer apparently said something to Vivians, who paused, read the defense, and attacked. Her move into the lane drew a defender, which allowed her to dish the ball to Teaira McCowan (career-high 35 points, 19 rebounds) for a layup.

Vivians' offensive showing was even more impressive considering she had to guard 6-4 sophomore forward Ruthy Hebard, who had a team-high 25 points on 11-for-12 shooting from the field. Since moving to the four position in MSU's four-guard lineup, Vivians often has had the advantage in matchups. Against Hebard, Vivians gave up three inches and only had two fouls. Still, she admitted she was frustrated she wasn't able to affect Hebard on the defensive end. As a result, she turned her focus to the offensive end and went to work.

Vivians said "everything" was different in the second half.

"I think one thing that helps her is we get her some easy shots early a lot of times and then her confidence just goes from there," Schaefer said. "I do think she is better. She is a senior. She has been to the wars, and I think she is confident."

Schaefer said earlier this summer he watched Vivians at the United States Under-23 Training Camp and felt like she "belonged." He said going against some of the nation's best players raised Vivians' confidence and motivated her to come back for her final season in Starkville hungry.

"When I see her, I see a presence," Schaefer said. "You talk about special athletes, they all have a presence. I just think she has that presence about her. I think she knows when she is feeling it. We all have seen it, whether it was in high school or she has had her times for us.

"But right now I think she is confident and comfortable. I think a lot of that has to do with shot selection and the shots we're getting her early in ballgames, and then her confidence just grows from there. She is obviously at another level after 10 games with her field goal shooting percentage and her quality of shots. She also has become a whole lot better passer."